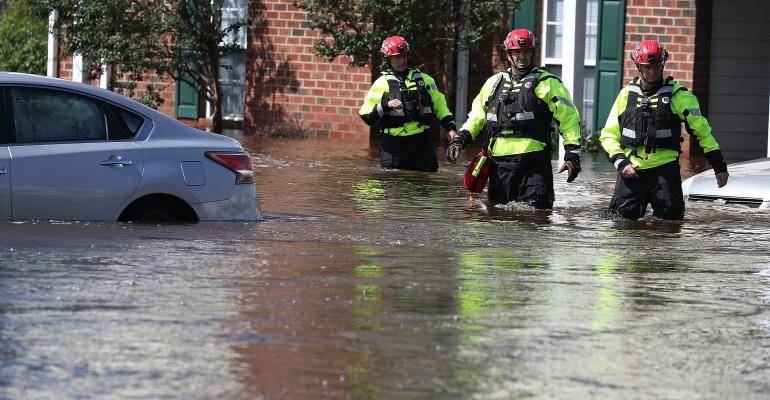 Moody’s has pegged initial property losses from the hurricane at between $16 billion and $20 billion.

As the recovery efforts following Hurricane Florence continue, the commercial real estate industry is beginning the long and complex process of damage assessment and remediation.

While estimates of the total damage caused by the storm may not be complete for some time, the industry is already bracing for a pronounced impact.

“Clearly the size and the scope of Florence is quite significant. ... The sheer magnitude of the damage will not be known for multiple days,” says Clark Schweers, principal and head of the forensic insurance and recovery practice at BDO USA LLP, an assurance, tax and financial advisory firm.

Florence, which began as a Category 4 storm in the Atlantic Ocean, made landfall as a Category 1 hurricane on Friday in North Carolina. It brought a record amount of rainfall—more than 33 inches—in Swansboro, N.C., and powerful winds, causing significant flooding. The storm has killed 37 people as of Tuesday’s count, The Associated Press reported.

When it comes to property damage, ratings firm Moody’s has initially pegged property losses from the storm between $16 billion and $20 billion. This is likely a conservative estimate, the firm stated. A new report from Morningstar Credit Ratings issued Thursday morning identified $1.49 billion in securitized commercial mortgages that are at an elevated risk because of major damage. The firm found 189 properties backing 187 securitized loans in 16 of the 18 North Carolina counties that have been declared as disaster areas by the Federal Emergency Management Agency, though assessment is still ongoing.

Morningstar said it doesn't expect a surge of loan defaults; business-interruption insurance should help for most properties. But flood damage could hinder refinancing some existing loans and paying off any maturing loans over the year.

After Hurricanes Harvey, Irma and Maria, few CMBS loans fell delinquent, Moody’s reports. “It’s a known factor for certain locations, so when the deals [are] rated initially, we definitely take that into account,” says EJ Park, a senior credit officer at Moody’s. Prior to the storm, Moody's anticipated CMBS loan exposure in the Carolinas at 2.7 percent and commercial real estate CLO exposure at 0.9 percent of the universe it rates. The firm found 345 loans backed by properties likely to be hit by the storm, for a combined 1,479 properties in North Carolina and South Carolina that hold a loan balance of $10.7 billion.

The storm appears to have missed larger cities in the area, such as Charleston, S.C., but hit hard in less-dense areas. Some of the commercial assets likely to be most impacted include single-tenant retail, garden-style apartments, single-family rentals, vacation properties and light industrial buildings, says Ross Litkenhous, vice president of strategic development at Altus Group, a commercial real estate software provider and advisory firm.

Commercial real estate professionals in the region face concerns not just about the extent of damage from flooding and wind, but also the sheer amount of wind-driven rain seeping through properties, Schweers says. Even minor water intrusions can have big impacts on commercial properties where people live and work. And with extreme flooding blocking access to properties and infrastructure, quick remediation appears unlikely. “Mold can be quite devastating and extremely costly for owners to deal with if it’s not able to be dealt with in the beginning,” he notes.

And while there is never a good time to have a natural disaster, the timing of Florence is particularly bad. Construction materials and labor costs are soaring, and they could increase further with tit-for-tat tariffs, Litkenhous says.

Meanwhile, the storm’s impact on the residential side is likely to create more demand in the local apartment sector, already somewhat constrained. “Clearly with the sheer amount of residential damage that has occurred, there is going to be significant demand for temporary housing and for apartment rentals,” Schweers says.

In the region’s smaller cities that were impacted, the multifamily occupancy rate was running around 94 percent before the storm, says Greg Willett, chief economist at RealPage Inc., a provider of property management software and services. That means few apartments may be free for temporary housing.

For example, there are about 22,000 apartments in Wilmington, N.C., with an occupancy rate between 93 percent and 94 percent. That translates to only about 1,500 vacant units. “That’s not a lot of stock if a bunch of single-family homes have been damaged,” Willett says.

While the recovery efforts appear to be challenging, the industry may be more prepared to bounce back than it was a few years ago. Following the wildfires on the West Coast and last year’s trio of harrowing hurricanes—Harvey, Irma and Maria—natural disaster resiliency has been top of mind for commercial property executives. However, natural disasters might always be a challenge “because it’s something that’s difficult to plan around,” Litkenhous says.