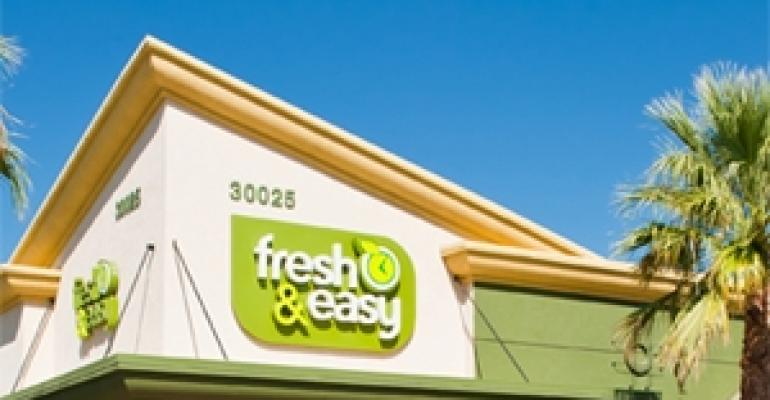 After a less-than-successful, five-year run, British retailer Tesco is ready to exit the U.S. market.

In a statement released on Dec. 5, company CEO Philip Clarke said it doesn’t seem feasible that Tesco’s Fresh & Easy division will be able to achieve profitability within an acceptable timeframe, and so the chain, which operates 199 locations in three states on the West Coast, will likely be leaving U.S. shores. Clarke also mentioned the company received several acquisition inquiries about the Fresh & Easy brand, created specifically for U.S. consumers.

Disposing of its U.S. portfolio might prove challenging, however, as one of the main reasons Tesco failed in America had to do with poor site selection strategy, according to multiple retail consultants.

To be sure, the company entered the country at an inopportune time, just as the Great Recession was getting under way and wreaking havoc on consumers’ spending capacity. The fact that Tesco chose to open its first stores in California, Nevada and Arizona didn’t help matters, as those markets suffered some of the greatest damage from the downturn, according to Neil Stern, senior partner with McMillan Doolittle, a Chicago-based retail consulting firm.

Ultimately, however, Tesco’s failure to build up momentum stateside was due to its poorly thought out strategy rather than to outside economic factors, notes Mark Heckman, principal with Mark Heckman Consulting, a Bradenton, Fla.-based firm.

“They were building stores that didn’t necessarily match the demographics they were trying to attract,” Heckman says. “I just don’t feel the combination of their merchandising, their store layout and product selection clicked with the consumer.

“Their site selection strategy was also a problem,” Heckman adds. “They were trying to take the cheap route of moving into rehabbed spaces in older shopping centers that weren’t necessarily in a position to attract the millenials, the gen-Xers, or even the boomers.”

After completing an 850,000-sq.-ft. distribution facility in Southern California in 2007, Tesco faced pressure to grow its store portfolio as rapidly as possible, according to Steven Montgomery, president of b2b Solutions LLC, a Lake Forest, Ill.-based c-store consulting firm. That had seemingly led the retailer to sign leases wherever vacant space was readily available, rather than picking sites that matched its target demographics and waiting until desirable spaces opened up, Montgomery notes.

Some of the locations Tesco ended up with, such as its stores in San Francisco, were good sites in Montgomery’s estimation. Others, however, including its stores in more suburban areas of California and Arizona, didn’t make much sense for a retailer that was offering products geared toward the time-harried, urban consumer rather than the value-oriented suburban parent, Montgomery says. Unlike Tesco’s Express stores in the U.K., the company’s Fresh & Easy locations fit neither the convenience store nor the conventional American supermarket model. Worse, Fresh & Easy locations didn’t sell gas, which is something Tesco stores do in England that helps generate traffic.

“If they were to locate in New York City or downtown Chicago” the Fresh & Easy format might have been a success, Montgomery notes. “But in California or in Arizona, somebody who drives a car goes into the store and they find private label products they are not familiar with when they can be in a supermarket 10 minutes later that sells brands [they] know. There were a series of errors like that there were pretty fundamental. The U.K. is a very densely populated market; here, we are a scattered population. So they needed to decide that either they were going to use an urban center strategy or they were going to build something that appealed to the driving population. They didn’t do either.”

In addition, the format Tesco chose for its U.S. stores, which range from 10,000 sq. ft. to 15,000 sq. ft., can be a challenge in itself, according to Gerald Lewis, a veteran convenience store consultant. The smaller stores offer fewer product choices than full-size supermarkets while at the same time failing to compete on price, Lewis says. Meanwhile, the vast infrastructure Tesco had to create to support all those stores, including its distribution facility, food processing plants and a delivery truck fleet, became a major drain on resources.

Given how poorly Fresh & Easy performed compared to competitors such as Whole Foods and Fresh Market, it’s unlikely that anyone will want to buy the entire brand, according to Montgomery. Tesco might be able to sell some of its better stores to other supermarket operators, dollar stores or drugstores, but the chances of one buyer picking up its diverse store portfolio are slim, adds Heckman.

“I think it’s going to be a location by location decision and I think anybody who buys those stores will cherry pick [them] very carefully,” he says.

Neil Stern expects that there might be a lot of parties interested in Tesco’s best real estate holdings, but like Heckman and Montgomery, he doubts anyone will want all of the company’s U.S. stores.

“There is a certain amount of that real estate in areas of the country that are still to recover,” he says. “The question is: can I cherry pick individual sites?”