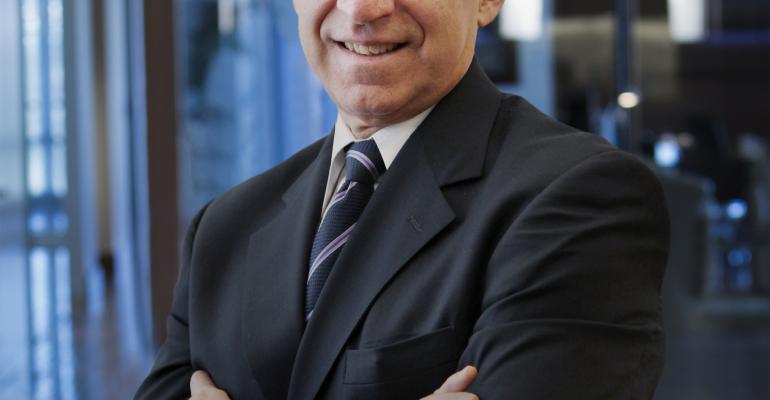 Glenn Rufrano is well known for his ability to lead companies through complex situations and turbulent times. He assumed leadership roles at New Plan Excel Realty Trust, Centro Global Property Group and Cushman & Wakefield at key points when structural changes were necessary to move forward with growth. In March, Rufrano was named CEO of American Realty Capital Properties, a REIT that had become tainted by the accounting scandal of its former external manager, American Realty Capital.

Rufrano is now immersed in a challenging situation that includes restoring credibility and reigniting growth momentum for the $20 billion REIT. Initiating a name change to VEREIT (NYSE: VER) is just one of the steps that Rufrano has taken as new CEO of the publicly traded company. NREI recently interviewed Rufrano about his decision to join VEREIT, what lies ahead and his knack for tackling challenging situations.

NREI: You were named CEO of American Realty Capital Properties Inc., now VEREIT, in March. What attracted you to this position?

Glenn Rufrano: The way that these positions get filled is by an executive search firm, and that’s what happened here. I knew something about ARCP. I was in New York at the time and had been reading the papers. What attracted me was that there were circumstances surrounding the company which I understood to some extent.

NREI: You have been on this path before with past positions at New Plan Excel, Centro Property and Cushman & Wakefield. Are you drawn to positions that offer a challenge?

Glenn Rufrano: I am intrigued by complex situations, and this could be called a complex situation. But I don’t think it is as complex as it looked last year. We have got a very good group of assets here and some very good people. What we have been doing is shedding some of the issues that surround the people and assets. We had that (accounting) issue and our financials had to be restated. But they have all been restated and we are back in good standing with all of our lenders and the SEC relative to the restatements.

The changes that have occurred since then include a virtually new board, some changes to senior management, a new stock exchange, a new name and a new business plan, which I think the market has embraced. That has, very quickly in the last four months, helped to regain any credibility we could have lost, and put ourselves in a position with what we expect is a sound foundation to grow at the appropriate time.

NREI: Was your big picture goal at VEREIT to come in and clean house or get the ship back on course, and how big of a task is that?

Glenn Rufrano: Certainly, the task is still, in part, ahead of us. What we have done is put in place a strategy for the execution of that task. What I have found is that when you are in situations where the company has gone through some level of turmoil there is almost no spot that you don’t touch. Changes need to be made to the board, corporate governance at the board level, management, and you are going to clearly have to make changes to the direction of the company with the business plan. The most important part of all of that is the execution. So we are now just beginning the execution phase with many of the parts in place, and some of the parts yet to be put in place.

American Realty Capital Properties (ARCP) was a start-up REIT in the net lease business that was taken public in 2011. We have a name that comes from an origination company and is very similar to that origination company. So that is why there has been some widespread confusion in the marketplace.

NREI: So, which entity had the accounting issues—ARC or ARCP?

Glenn Rufrano: The accounting issues were at ARCP.

NREI: One of the first things you have done is initiate a name change. Can you share with our readers what the significance is behind the name VEREIT?

Glenn Rufrano: We wanted something that was simple. The root of it, which is veritas, means truth. So when we were able to trademark VEREIT, we were very happy and got that done as quickly as possible.

NREI: So is veritas symbolic of how you are trying to change the image or perhaps the culture within the company?

Glenn Rufrano: It is, in part because we agreed on the name and we also have agreed on a number of principles. For instance, we have created a mission statement that says that our primary chore is to serve our tenants, our stakeholders and our employees. Those three are very important, and they all have to be served equally in order for the enterprise to function well.

We also have created a definition of culture. Our definition of culture is that we should behave towards others as we would want them to behave towards us. We have defined behavior in a number of ways, including being ethical, respectful and collaborative. We also have defined our business approach. We should be disciplined, transparent, consistent and simple in how we run our business. So VEREIT is the word, but we have coupled those three concepts around it and the totality is how we would like to represent ourselves.

NREI: You recently held your second quarter earnings call where you outlined a number of strategic initiatives. Can you briefly summarize those for our readers?

Glenn Rufrano: As a real estate company, we will always be looking at our portfolio and determining how to increase value within our portfolio. Part of that increase of value on a portfolio basis could come in the form of culling, so that the portfolio itself is well diversified and has a risk-return relationship that we are satisfied with. 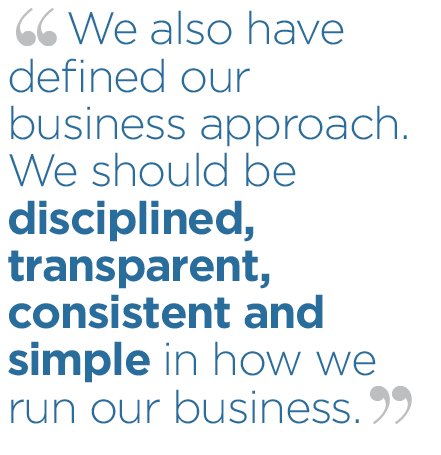 In that regard, we have spent a good amount of time looking at the portfolio and identified non-controlled joint ventures, flat leases, restaurants and non-core assets to be sold. We concluded that within those four segments we have between $1.8 billion and $2.2 billion in assets that we should cull between now and the end of 2016.

We announced that this year through the second quarter that we have about $960 million in assets that have either sold or are under hard contract. So we have been executing. We haven’t just been sitting back and strategizing.

Third is the balance sheet. The balance sheet is in pretty good shape. We have plenty of cash flow. We don’t have any maturities looming in the very short term. But we are in a very competitive market where the cost of capital is important and our foundation for growth means that the growth part of our business will be based on our cost of capital. To get our cost of debt capital down, we want to move towards investment grade metrics. [VEREIT stated in its second quarter earnings call that its goal is to move from net debt to EBITDA of a current ratio of 7.5 to between 6-7.]

The fourth pillar that we discussed is dividend. The company suspended its dividend when it went into non-monetary default due to the financials being pulled. As of March, we had all of our financials restated and we have no non-monetary default at all. Because we are a REIT, we needed to establish a dividend and we established a dividend that would be paid in the third and fourth quarter at 13.75 cents per share, which is on an annual basis 55 cents per share. It was important that our shareholders know and understand that we have good cash flow. We can provide a good dividend and a sustainable, sound foundation for the dividend over time.

NREI: Of the $1.8 billion to $2.2 billion you are looking to dispose of, what percentage of your overall portfolio is that?

Glenn Rufrano: About 10 percent. You’re always trying to cull 2 to 5 percent of your portfolio, if it’s appropriate, in any given year. Here, we are doing a little more, because there hasn’t been some past culling.

NREI: What kind of time table do you have for getting things back on track?

NREI: REIT performance has been down in general this year. Does that influence your strategy at all, or do you have a laser focus on what’s happening internally?

Glenn Rufrano: The reason that REITs have not performed as well this year is because there is an expectation of interest rates going up. REITs have always been considered in part a bond equivalent. So there is a negative relationship as rates go up. In terms of strategy, I don’t think strategy should take into consideration whether REITs will go up or down over a period of time. It needs to be a strategy that you believe in and will stay the course.

Where I do think the market has influenced us is in the execution of that strategy. The day we announced $1.8 to $2.2 billion [in dispositions] we already had $960 million sold or under hard contract. That execution was influenced by the potential for interest rates increasing and perhaps cap rates increasing. So we wanted to get out in front of that from an execution standpoint.

NREI: Was there anything else that you wanted to add?

Glenn Rufrano: The question that you started out with was that [I] have been through some messy situations, but this is a lot less messy than some of the other situations that I have been through. It’s not that it is easy. Nothing is easy. But what has been easier is to see here where we have to go, and where we have to go is culling our portfolio, getting our balance sheet in order, starting out with a dividend. As we progress, I have no doubt that this company can be a leader in the triple net lease business, and we expect that to happen in the next 12 to 18 months.