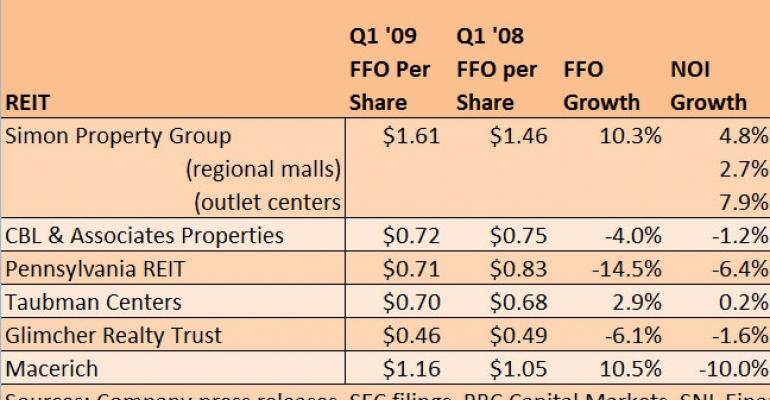 In spite of the most challenging retail environment in recent history, the six regional mall REITs that have reported their first quarter results have emerged from the carnage in decent shape. All outperformed consensus analyst estimates, by a range of $0.01 per share to $0.13 per share. But the firms' successes likely had more to do with low hurdles than with improving property fundamentals, say industry insiders.

Sales per square foot took a beating across the sector and occupancy levels continued to fall. What’s more, several mall REITs, including Glimcher Realty Trust (NYSE: GRT), and CBL & Associates Properties (NYSE: CBL), appear encumbered by too much debt, according to analysts.

“The first quarter 2009 earnings season is shaping up to be perhaps the best earnings season from a hit/miss standpoint vs. analyst estimates over the past two years,” wrote RBC Capital Markets analyst Rich Moore in a May 1 note. “Clearly, lowered expectations by both management teams and analysts have helped produce a record quarter even in the midst of one of the worst recessions in U.S. history.”

First quarter results also got a boost from drastic cost-cutting measures implemented across the sector. Mall REITs continue to lay off staff, reduce employee salaries and cut property level expenses. (Read story here). In addition, some REITs are saving cash on shareholder dividends. (Read story here). For example, CBL & Associates Properties announced it would pay its 2009 dividend with a combination of stock and cash. Simon Property Group, which already started paying its dividend with 90 percent stock, further reduced its dividend amount for the year. Now, the company plans to pay only the minimum amount required to distribute all of its taxable income, which it currently estimates at $2.70 per share.

Out of the seven regional mall REITs, six have reported their results for the three months ended March 31. General Growth Properties (NYSE: GGP), has not indicated that it plans to issue a first quarter 2009 report.

Simon was one of only two mall REITs to report positive FFO and NOI growth. The other was Taubman Centers, Inc. (NYSE: TCO), a Bloomfield Hills, Mich.-based firm with a 24.8-million-square-foot portfolio. Taubman beat analyst estimates by $0.12 per share, with FFO per share of $0.70. The figure was 2.9 percent above the $0.68 per share reported in the first quarter of 2008. Taubman’s results included a $2.5 million restructuring charge due primarily to staff terminations. The REIT recorded first quarter NOI growth of 0.2 percent. Sales at Taubman’s malls, however, were down 13.5 percent compared to a year ago and its portfolio occupancy fell 130 basis points, to 88.6 percent from 89.9 percent.

“In general, mall REITs have done better than we expected and management seemed to be more upbeat than at the end of 2008,” says Todd Lukasik, an analyst with Morningstar. “But we still believe the negative impacts of the weak economy and the weak retail environment are going to play out as 2009 progresses. As tenants’ sales go down, they are less able and willing to pay higher rents.”

Michael Magerman, vice president for the REIT sector with Realpoint LLC, a Horsham, Pa.-based credit rating agency, also thinks regional mall REIT performance will deteriorate as falling sales will continue to hurt retailers’ bottom line. “The thing that’s showing up the most now is [falling] sales per square foot,” Magerman says. “The other effects, such as a decline in rent, are obviously going to take longer to see because leases run for anywhere from three to seven years.”

Macerich Co., a Santa Monica, Calif.-based REIT reported positive FFO growth, but falling NOI in the first quarter of the year. The firm beat consensus estimates by $0.10 per share, with FFO of $1.16 per share—10.5 percent above the $1.05 per share reported for the same period in 2008. The figure was impacted by $5.5 million in severance costs. Sales per square foot at the company’s malls fell 6.0 percent, to $440 from $468, and occupancy declined 210 basis points, to 90.2 percent. The REIT’s NOI registered a 0.1 percent decline.

PREIT (NYSE: PEI), a Philadelphia-based REIT with 38 malls in its portfolio, beat consensus estimates by $0.03 per share, with FFO of $0.71 per share. The figure represented a 14.5 percent decline from the $0.83 per share reported for the first quarter of 2008. PREIT’s same-store NOI also took a 6.4 percent dive. The company reported lower sales across its properties, at $340 per square foot. That’s a 4.5 percent decline from $356 per square foot during the comparable period last year. PREIT’s portfolio occupancy fell 30 basis points, to 89 percent.

PREIT operates a 34.6-million-square-foot portfolio which includes both malls and shopping centers.

However, what concerned analysts about Glimcher was not the performance of its malls, but its debt load. Glimcher ended first quarter with $392 million outstanding on its credit facility. If the REIT does not comply with certain covenants implied by the facility it could find itself in default. During the company’s earnings call on Apr. 23, Glimcher executives declined to discuss the nature of those covenants. Instead, Michael Glimcher, company chairman and CEO, insisted he felt comfortable Glimcher would be able to comply with its lenders’ requests.

CBL & Associates Properties Trust beat analyst estimates by $0.01 per share. The Chattanooga, Tenn.-based REIT reported FFO per share of $0.72, down 4.0 percent from $0.75 per share in the first quarter of 2008. CBL’s results this quarter were impacted by a $7.7 million charge related to its investment in Jinsheng Group, a Chinese mall operator. CBL’s same-center NOI fell 1.2 percent, as same-store sales registered a 4.4 percent year over year drop, to $326 per square foot, and occupancy dropped 300 basis points, to 88.6 percent.

However, as with Glimcher, the biggest concern to analysts remains CBL’s balance sheet.

“The economic softness continued to affect CBL’s bottom line results, although, in a hopeful sign, the impact appears to be less substantial than it was in fourth quarter 2008,” Moore wrote in an Apr. 29 note. He added that CBL “is in deep need of additional equity capital.”