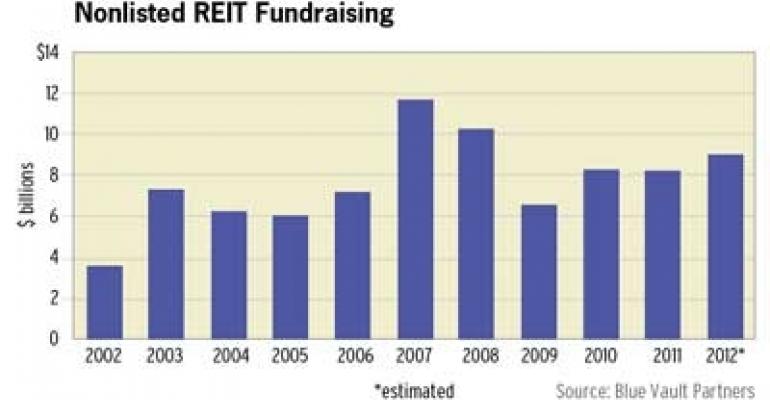 Non-listed REITs are expected to raise more money this year than they have in the past three years, according to a new report from Blue Vault Partners LLC.

The Atlanta-based firm, which specializes in non-traded REIT research, estimates that non-traded REIT sponsors will raise roughly $9 billion in 2012—a 9 percent increase over 2011. The increase likely will be driven by a larger number of liquidity events and investor interest in newly introduced open-ended, “daily-NAV” non-traded REIT offerings.

Last year, sponsors raised $8.2 billion in new capital (including the reinvestment of distributions)—a slight decrease from the $8.3 billion raised in 2010, according to Blue Vault Partners.

“We were slightly surprised that fundraising was flat in 2011 because it was trending up during the first half of the year,” says David Steinwedell of Blue Vault Partners. “We thought fundraising would reach $9 billion last year.”

The amount of funds raised over the past two years trails the two biggest year, 2007 and 2008 when $11.7 billion and $10.2 billion was raised, respectively, according to Blue Vault Partners research.

Steinwedell says a number of reasons contributing to the drop in fundraising in 2011. Most importantly, the lack of full-cycle events (IPO or liquidation) reduced the amount of funds that could be re-invested into the sector. Last year, only one non-traded REIT had a full-cycle event, and there were only two of these events in 2010.

In contrast, three full-cycle events have already been announced for 2012. The first of these was American Realty Capital Trust Inc.’s listing on NASDAQ exchange. “Initial trading has been successful, and that’s good news for the industry,” Steinwedell says, adding that the industry could see an additional $1 billion or more in capital coming back into the market through full-cycle events.

Steinwedell also points to the timing of the new non-traded REITs as a reason why fundraising in 2011 was not as robust as BVP anticipated. “A number of new products that were added in 2011 came out fairly late in the year, and as a result, they didn’t have as much of an impact on capital raising,” he explains.

Finally, non-traded REIT fundraising was impacted by issues including regulatory attention, the strong performance of equities and the European debt crisis.

Roughly 78 percent of all the dollars raised in 2011, or $6.4 billion, funneled into just 10 non-traded REITs. Moreover, the top 10 sponsors were responsible for 81 percent of all money raised during the year.

Steinwedell expects to see three to five new sponsors enter the space in 2012 and approximately eight to 10 new REIT offerings. Those numbers may indicate that the industry is beginning to lose some of the momentum. In 2010, for example, the sector welcomed 15 new offerings from nine first-time sponsors, according to Blue Vault Partners.

However, long-time sponsors continue to be active. Moreover, they continue to innovate and bring offerings to the space that will attract new investors. For example, Cole Capital and American Realty Capital have announced products that provide investors with more frequent portfolio valuations and higher levels of liquidity.

“Over the long term, we anticipate that these new product designs may potentially change how the industry is perceived and allow for non-traded REITs to be thought of as more mainstream investments,” Steinwedell says. “And, if they are well-received during the first half of the year, I think we’ll see more sponsors introduce funds during the second half of 2012.”

With that said, Steinwedell acknowledges that the non-traded REIT space is facing some challenges. Among them: the increased regulatory scrutiny of these investments and legal issues surrounding sponsors such as Apple Hospitality, which is in the midst of a lawsuit regarding the source of its distributions and the way its broker/dealer network represented its investments.