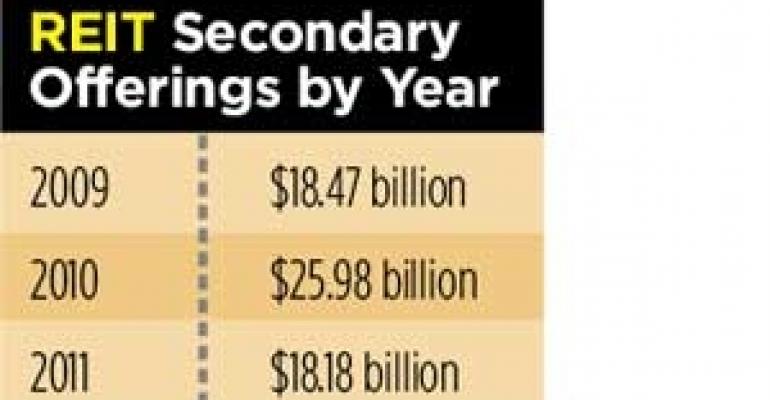 It’s mid-February, and U.S.-based publicly-traded REITs have already issued more than $1 billion through secondary equity offerings, according to SNL Financial.

The activity not only illustrates ongoing investor interest in REITs, but also indicates that REITs are continuing to clean up their balance sheets and to look for capital to grow their businesses.

For the past five years, there has been an average of $15.4 billion annually in REIT secondary offerings, also known as follow-on offerings, according to SNL Financial, a Charlottesville, Va.-based analyst firm. “That volume shows pretty consistent investor demand,” says Jason Lail, a manager in SNL Financial’s real estate group. “The market has traditionally been accepting of those offerings.”

So far this year, the largest secondary offerings came from Houston-based apartment REIT Camden Property Trust ($394 million) and Birmingham, Ala.-based healthcare REIT Medical Properties Trust ($229 million)—continuing a trend that begin in 2011. Six of the top 10 largest follow on offerings in 2011 were issued either by apartment-focused REITs or healthcare-focused REITs. The REITs in those two sectors also happened to be trading at the highest premium to net asset value (NAV).

Lail says it makes sense that REITs pursue secondary offerings when their shares are trading above NAV since they don’t want to sell their shares at a discount. “As a REIT, if your stock is trading at a premium to NAV, it’s probably a good time to issue equity,” he explains, adding that about 56 percent of U.S. equity REITs currently is trading at premium to NAV. “Current valuations indicate that REITs are in a good place to raise capital through equity offerings.”

Other REITs chose to issue equity with plans to improve the overall health of their balance sheets by paying down debt or to make property acquisitions. “Reducing leverage has been one of the drivers for equity offerings for the past four years and into this year,” Lail says.

Earlier this month, for example, Kilroy Realty Corp. announced plans to issue 8.25 million shares of common stock at $42 per share. The Los Angeles-based office REIT expects to net proceeds of about $332.2 million and said in a statement that it plans to contribute the funds to its operating partnership to use for general corporate purposes including acquiring properties and repaying outstanding debt.

Lail cautions REITs investors to conduct an appropriate level of due diligence before they invest in secondary offerings—not only considering how shares are priced relative to NAV, but also delving into a REIT’s plan for the proceeds. “By issuing equity, REITs are diluting the value for existing shareholders, so they need to have to have some sort of plan for the money,” Lail says. “You don’t want them to raise it and then just sit on it.”