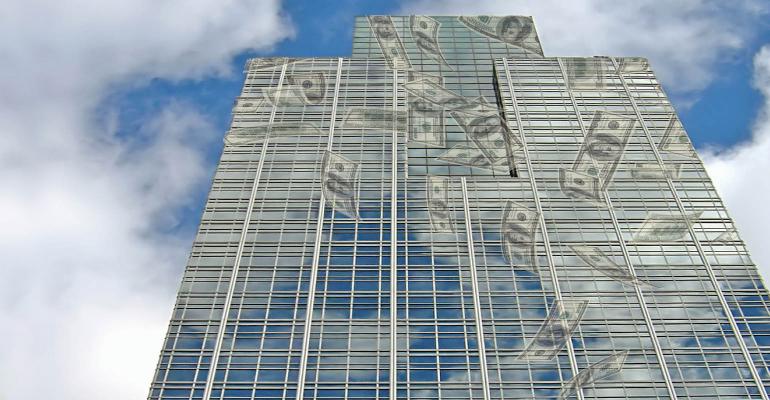 REITs Appear Poised for a CRE Down Cycle

The commercial real estate sector seems poised for a slowdown. But bulwarked by healthy balanced sheets and strong portfolios the sector’s publicly-traded firms, for the most part, should be able to deal with any challenges. In fact, it may be a time of opportunity for REITs that can snap up assets in opportunistic plays.

These were among the findings of NREI’s second research survey exploring the state of publicly-traded REITs.

But there is also caution in the air.

“The warning signs of a slowdown are clear,” one respondent to the survey wrote. “This is a great opportunity for REITs to reduce debt and plan for a weaker market.”

To merge or not?

But overall, M&A activity for REITs has been muted.

REIT mergers and acquisitions in the U.S. and Canada amounted to about $16.4 billion in 2016, according to SNL data provided to NREI. Activity was subdued across all commercial real estate sectors last year, according to industry observers.

“Overall M&A activity was down sharply because of a decline in portfolio sales and entity-level transactions,” says Jim Costello, a senior vice president at Real Capital Analytics (RCA), a New York City-based research firm. “The issue is that 2015 was the year of the mega-deal, with lots of entity-level and portfolio sales happening.”

In 2016, most public REITs experienced stock prices that were below net asset values, says Mark Bratt, senior director of retail capital markets for commercial real estate services firm CBRE. Therefore, the lower mergers and acquisitions activity was a function of REITs lacking sufficient capital and stock price valuations to carry out some of the transactions. The slower activity affected all REIT sectors, not just retail, according to Bratt.

Observers are not certain that 2017 will be a busy year of consolidations for the REIT sector. Bratt notes that the sector might go in another direction altogether.

“With lower stock prices it might be a good time for some companies to go private,” he says.

Respondents were asked to rank what REIT sectors would be at the top of their “buy” and “sell” list and were able to select up to three property types in both categories.

Industrial REITs surged to the top of the list in this year’s survey, with 46 percent of respondents naming the sector as being on their “buy” list. That was up 12 percentage points from last year, when 34 percent put in on their buy list.

Further, industrial REITs were only named on 9 percent of respondents’ “sell” lists, giving it the strongest net positive response in the survey.

Other sectors at the top of the “buy” rankings included medical office REITs (35 percent) and student housing REITs (24 percent).

“Banks [are] requiring more equity, which means they are lending less percentage-wise,” one respondent wrote. “With less leverage, you buy less, not more. So the opportunity is finding equity partners.”

But an April report from Fitch said that the U.S. REIT sector has seen a “significant” increase in commercial bank borrowing in recent years. At the end of 2016, bank borrowing exposure, including outstanding amounts on unsecured revolving credit facilities and term loans, accounted for 16.5 percent of total debt. Although that is an improvement from the  18.8 percent a year ago, it is still hovering near a 10-year high and is well above the 8.5 percent from year-end 2010.

The “failure” of REITs to capitalize on the strength of the unsecured bond market to reduce bank borrowings is increasing liquidity and funding risk, according to Fitch. One concern of the elevated exposure is that REITs may max out bank borrowing now when financing is still available and not have enough “dry powder” in terms of financing options if credit starts to tighten.

“If one of those forms of capital goes away, that could be problematic, particularly if it is during a period where they need to access capital and they can’t do so any longer from their bank relationships,” says Steven Marks, managing director, corporate finance, at Fitch.

“Capital market access is extremely important to REITs,” adds Chris Wimmer, vice president and head of REITs at Morningstar Credit Ratings. REITs access capital through public, private, debt and equity sources. “To the extent that REITs can demonstrate access to each of those four quadrants, that gives them a better credit profile,” says Wimmer.

Part of what may be frustrating some ratings agencies is that the higher level of bank borrowing comes at a time when the bond market is quite robust. Yet REITs have been turning to the banks for financing for a couple of reasons. Banks have been aggressive in courting new business and are offering five- and seven-year loans. REITs may also be relying more on bank financing simply because of the flexibility it offers.

“What the commercial banking market provides is that it is not necessarily cheaper, but it is more flexible in the extent of the maturities,” says Philip Kibel, associate managing director, real estate finance, at Moody’s Investors Service. For example, REITs can get three-, five- or even seven-year debt that can fit nicely into their maturity schedules with no pre-payment penalties, he notes.

What to do next

In terms of deploying capital, about half of respondents (47 percent) said redeveloping or repositioning assets was what REITs should be doing with their cash. Other top responses included paying off debt (39 percent), acquiring assets (33 percent) and investing in core operations (24 percent). Only 12 percent supported share buybacks.

In terms of managing portfolios, it seems to be anyone’s guess as to what REITs will do. About 31 percent of respondents said they expect REIT portfolios to remain stable. And then about one fifth of respondents (21 percent) said REITs would be net acquirers, but about one quarter (28 percent) said they would be net sellers. Additionally, about one-fifth, 21 percent, admitted they weren’t sure what REITs would do with their portfolios.

Several respondents wrote about an opportunity that could be returning to the market soon: distressed assets.

“There is oversupply in pockets for multifamily and structural changes in retail,” a respondent wrote. “For those with good liquidity and cash flow, with low leverage, opportunities may surface in distressed assets.”

In projecting performance for the rest of the year, respondents are mixed on the outlook for publicly-traded REIT stock prices and total returns for the balance of 2017.

The picture is similar for total returns. Just under half of respondents (47 percent) expect total returns to increase for the balance of 2017. Another 22 percent said total returns would be flat and 31 percent expect a decrease (up from 20 percent in 2016).

At the end of the day, however, uncertainty remains an issue. No one is sure where the Trump administration is headed in terms of its policy and legislative goals. And that’s causing uncertainty in the economy as well. So perhaps the best strategy for REITs is just to sit tight and see what happens.

“These are uncertain economic times so I would just position company to have cash, not excessive debt and see what develops in Washington,” one respondent wrote.

Donna Mitchell and Beth Mattson-Teig contributed to this report.

The NREI research report on the REITs was completed via online surveys distributed to readers in May. The survey yielded 380 responses. More than half of respondents reported their titles as Owner/Partner/President/Chairman/CEO/CFO. The results from the current research were compared against a prior study completed in 2016. The 2016 survey yielded 350 responses.