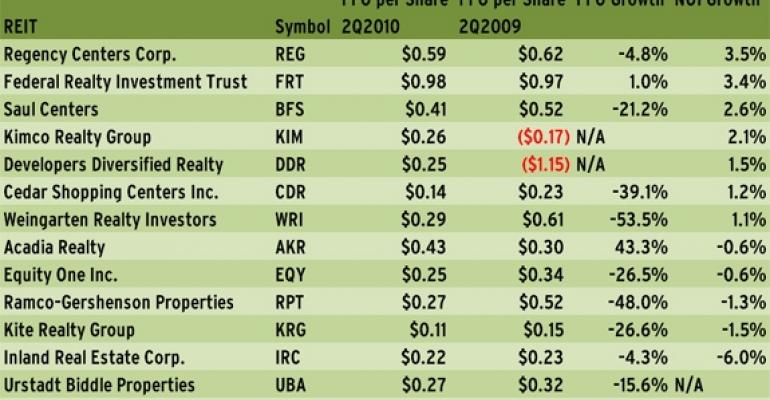 “While [it’s] still a tenant market, the position of retail landlords is improving, which should be reflected over time in our leasing spreads, same-store NOI, renewals and occupancy,” said David Henry, president and CEO of Kimco Realty Corp., during the company’s conference call with analysts on July 29.

Another REIT executive, Dan Hurwitz, president and CEO of Developers Diversified Realty, noted that the past quarter marked the first time since the beginning of the financial crisis in 2007 that shopping center REITs have collectively experienced positive leasing spreads and same-store NOIs. NOI growth for shopping center properties is now near pre-recession levels, according to Rich Moore, analyst with RBC Capital Markets. Average rents have also begun to trend upward. For example, Developers Diversified Realty reported that its average annualized base rent increased 0.4 percent year over year, to $12.54 per square foot, from $12.49 per square foot.

Improved leasing fundamentals can be attributed to the fact that many of the retailers that have survived the Great Recession are now in stellar financial shape and have learned to adapt to a more subdued consumer environment.

In July, same-store sales for U.S. chain stores rose 2.8 percent year-over-year, according to ICSC. That’s in spite of the fact that consumer confidence keeps falling. In July, the Deloitte Consumer Spending Index declined for the third straight month, to 4.45 percent, from 4.63 percent in June. Yet, during each of the three months, same-store sales have trended up. Year-to-date, same-store sales have increased 3.6 percent.

“As consumer confidence has continued to drop, most of our key retailers are posting positive comps and significant profits regardless,” Hurwitz told analysts on Aug. 3. “It is very difficult for our industry to successfully overcome job and wage reductions or even seizures in the capital markets. But our retailers have proven that operating in a low consumer confidence environment is not only possible, but can actually be extremely profitable.”

The lackluster outlook on job growth, however, continues to worry analysts. A recovery in shopping centers fundamentals will be hard to sustain without a visible improvement in employment statistics, says Todd Lukasik, a REIT analyst with Morningstar.