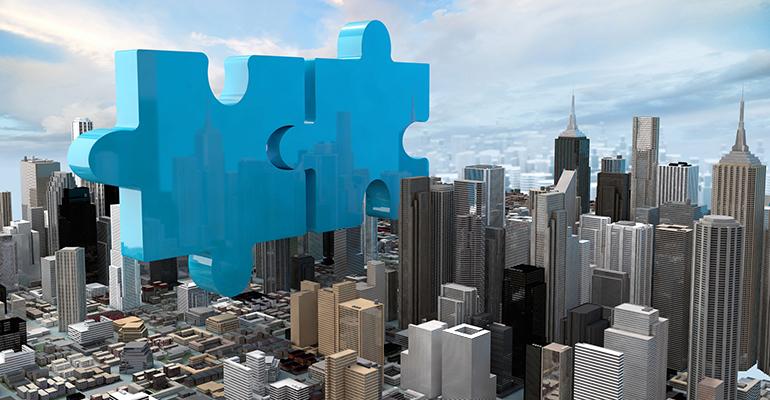 Would Forest City Agree to a Brookfield Deal?

Forest City’s stock has been trading at a big discount to the consensus estimate, according to analysts.

Recently, there has been talk that Brookfield Asset Management is interested in acquiring Forest City Realty Trust—a Cleveland-based REIT that is undergoing formal review of strategic alternatives that could include anything from a merger to nothing at all.

But with the supposed offer price not “meaningfully higher than where the stock currently trades,” according to Bloomberg, it might be a hard sell.

“If that’s true, then I can’t imagine that the company is very excited about that,” says Paul Adornato, a veteran REIT analyst. Over the last couple of years, Forest City’s stock traded at a big discount to the consensus estimate of its net asset value (NAV), especially in comparison to the rest of the REIT universe, he notes.

Sheila McGrath, senior managing director at Evercore ISI, the equity research division of investment banking advisory firm Evercore, says she would be surprised if Forest City’s board accepted Brookfield’s offer as described. “If there were a bid for the company closer to its consensus NAV of $28 per share, then perhaps the board would view an offer more seriously,” McGrath says.

Another consideration is that Forest City converted to a REIT two years ago, and there are tax penalties that practically restrict the company from selling assets within five years of this REIT conversion, McGrath says. “I think that these additional frictional costs would impede the value of what other buyers might pay at this juncture. The board may be in a better position to maximize shareholder value when these restrictions burn off in three years,” she notes.

Still, Brookfield would be among the players that would make sense as a buyer for Forest City, though other private equity firms or teams of companies could also step up, Adornato says. “Brookfield is a large asset manager, and they have an appetite to acquire large entities and large assets,” he notes.

A Forest City acquisition would also offer the complexity Brookfield tends to seek, Adornato adds. For example, Brookfield acquired the Rouse Co.—which operated class-B malls—about two years ago and turned the company private. “They have a history of bucking the trend in terms of buying assets that are perhaps more difficult to value or not properly valued by the public markets,” Adornato says.

Ann Dai, director in the equity research group at Keefe, Bruyette & Woods, declined to speak specifically about the talks. However, Dai notes that Brookfield has a long history of managing real estate well and has not been afraid to write a big check. “It definitely is in their wheelhouse,” says Dai, of Brookfield making large acquisitions. McGrath adds that Brookfield is a big organization with a lot of capital—plus a history of not pursuing hostile transactions. “If it were in fact Brookfield, it wouldn’t be under any hostile circumstances,” she notes.

The reported offer comes as Forest City’s board works its way through a formal review of strategic alternatives, a move the company announced in September amid activist pressure. The company has not given any update on the process or when it might end. During the most recent earnings call, Forest City CEO David LaRue said the board’s review is “robust,” but declined to answer an analyst’s question about the timetable on its completion.

Meanwhile, the REIT has been working on downsizing its retail portfolio. Forest City executives have said in the past that they would like to reduce its risk exposure, and the retail sector has been experiencing volatility, Adornato notes. Forest City has been in the process of completing of its 10-mall portfolio sale to QIC. In January, the REIT announced an agreement with Greenland USA, Forest City’s joint venture partner at Pacific Park Brooklyn, that would reduce Forest City’s ownership in the mixed-use development to 5 percent from 30 percent—a step toward reducing its exposure to development risk, says Adornato.

Aside from its reported interest in Forest City, Brookfield has expressed interest in other REIT acquisitions. In November, Brookfield Property Partners made an unsolicited $14.8 billion offer for the rest of the GGP shares it doesn’t already own. Many analysts noted that while Brookfield is in a unique position, as it already owns nearly a third of GGP’s shares, the bid was likely too low, and GGP rejected it.