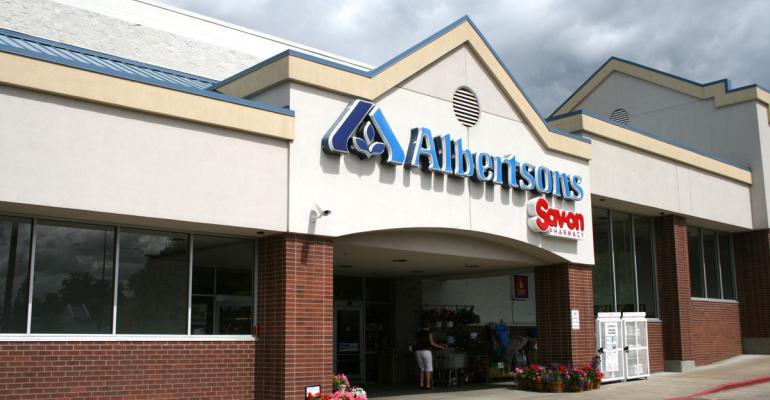 For now, a near-term revival of Albertsons’ scuttled listing attempt is off the table.

(Bloomberg)—Add Albertsons Cos. to the growing list of companies haunted by the specter of Amazon.com Inc.’s takeover of Whole Foods Market Inc.

Almost two years after the grocer postponed its initial public offering, Albertsons’ management and its private equity backers have put renewed plans for a listing on hold again, according to people familiar with the matter. Its own failed courtship with Whole Foods and Blue Apron Inc.’s weak IPO performance have further complicated options for a company already struggling with negative same-store sales amid a cutthroat grocery price war.

In the months before Amazon’s game-changing $13.7 billion takeover of Whole Foods was announced on June 16, Albertsons had been considering reviving its IPO plans and going public by the end of the year, the people said, asking not to be identified because the details are private. If the company had pursued that route, it was planning to relaunch with a narrower price range and go straight to investors that showed interest in the deal in 2015, the people said.

Albertsons has also continued to update its quarterly financial results in amended filings with the U.S. Securities and Exchange Commission, a sign industry watchers say indicates the company’s IPO plans may not be iced forever. The last filing was made on May 11.

For now, a near-term revival of Albertsons’ scuttled listing attempt is off the table, said the people. Slipping financials as well as the poor stock performance of its closest peer, Kroger Co., has left stakeholders convinced that the company won’t get close to the valuation of as much as $12.4 billion that it targeted in 2015, based on the number of shares outstanding after the offering, they said.

Albertsons is backed by private equity firm  Cerberus Capital Management, which first invested in the grocer in 2006 and has grown it through acquisitions, including a $9.2 billion deal for Safeway Inc. that was announced in 2014. Buyout firms pool money from investors with a mandate to buy companies within five to six years, then sell them and return the money with a profit. The firms typically seek to more than double their money per investment, holding each company for three to five years.

Cerberus is constantly evaluating monetization options as well as market conditions and dynamics to determine the best outcome for its investors, the firm said in an emailed statement.

A viable merger opportunity may yet materialize, though options in the grocery industry are narrowing. Albertsons was spurned in its attempt to negotiate a deal for Whole Foods through April and May, while the organic grocer was also in talks with its eventual buyer Amazon. As recently as March the Boise, Idaho-based company discussed a merger with Sprouts Farmers Market Inc. that would involve taking the organic grocer private, people familiar with the matter said at the time.

Buying Sprouts would give Albertsons expertise on perishables and natural foods that could be applied across its chains, according to Bloomberg Intelligence analyst Jennifer Bartashus.

During its ownership, New York-based Cerberus has already proved it’s willing to pursue big deals: Albertsons took on debt of more than $6 billion to acquire Safeway, giving it 2,000 stores and creating the second-biggest supermarket chain in the U.S. behind Kroger.

Albertsons has already been facing sustained pressure from existing competitors. Wal-Mart Stores Inc. and discount chains like Lidl Ltd. have been luring customers with ultra-low prices, while grocery chains like Publix Super Markets Inc. are focusing on quality of their food offerings to compete.

Albertsons’ overall same-store sales turned negative in fiscal 2016, with the Safeway-branded stores declining 3.7 percent in the last quarter of the year, according to a company filing.

To convince potential investors of its growth prospects in its 2015 IPO roadshow, Albertsons pitched plans to expand its natural and organic foods offerings. Now, the looming Amazon-Whole Foods tie-up squelches confidence in those hopes.

“Nobody really knows exactly what Amazon is going to do, but you’re already dealing with a hyper-competitive space where margins are pretty thin,” said John McClain, a high-yield bond manager at Diamond Hill Capital Management.

It’s not the first time an unexpected shock in the grocery industry has scuttled Albertsons’ listing plans. The day the grocer was first supposed to price shares in November 2015, Wal-Mart released a profit forecast that sent the company’s stock into the biggest decline in more than 27 years. Albertsons at first delayed its IPO to give it time to reassure potential investors, but ended up postponing the listing indefinitely.

While the company wasn’t as far down the road to an IPO this time, the effects of the Whole Foods deal were still immediately felt. Albertsons’ debt plunged after the acquisition was announced, with an 8.5-year junk bond sold last year dropping as low as 91.75 cents on the dollar, from about par. The debt has since recouped some of its losses, but is still trading well below its pre-deal levels. The company’s loans have also declined.

Last week, Albertsons canceled a plan to repurchase $500 million of bonds, saying it hadn’t been able to satisfy financing requirements. The company announced the buyback before the Whole Foods deal was announced and said it would need to issue new debt to fund it.

Investors are hardly smiling on grocery stocks. Kroger, Supervalu Inc. and Weis Markets Inc. lost huge chunks of their market value the day Amazon’s blockbuster move was announced, while Blue Apron -- the only food-related company to attempt an IPO in the U.S. in the intervening weeks -- priced well below its targeted valuation. The meal-kit delivery company is now trading down from its reduced IPO price of $10 at as low as $7.45.

Blue Apron tried to counter the looming Amazon-Whole Foods deal on its IPO roadshow by playing up the uniqueness of its product offering and its growth potential, people familiar with the matter said last month. Investors didn’t buy it. Albertsons, meanwhile, is struggling to stand out in a crowded industry that is bracing for a major push by Amazon.