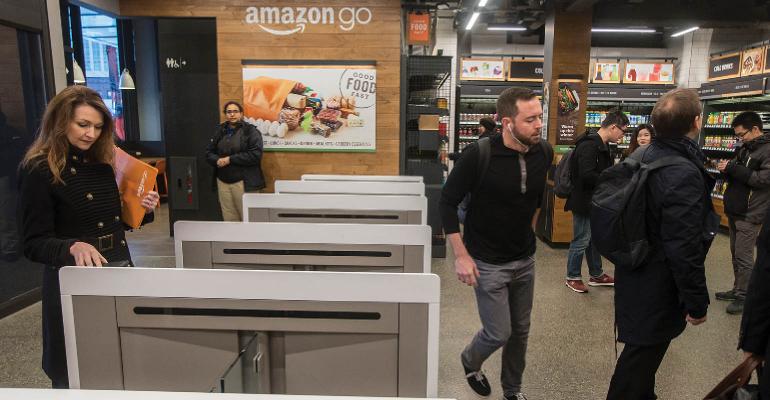 Amazon is considering opening 3,000 AmazonGo stores, after launching its first location in Seattle in 2016.

(Bloomberg)—If Amazon.com Inc. proceeds with a plan to open 3,000 cashierless stores by 2021, it could cost as much as $3 billion, according to analysts at Morgan Stanley, but also signal a bigger push by one of the world’s largest companies into the grocery business.

The e-commerce giant is taking a close look at the future of its AmazonGo stores, where shoppers use a smartphone to make purchases. Amazon unveiled the first such store near its headquarters in Seattle in 2016 and has since announced two additional sites in its hometown and one in Chicago. Some of the shops only offer a limited selection of salads, sandwiches and snacks, while others have a small selection of groceries, making it more akin to a convenience store.

“We see Amazon as having to invest between $0.5 billion and $3 billion in building these 3,000 stores,” analysts led by Brian Nowak wrote Thursday. “Given Amazon’s need to invest in in-store automation technologies, cameras and sensors, we would not be surprised to see the cost toward the higher end of this range,” they added. It would still be a small investment based on Amazon’s $200 billion in total 2018 retail operating expenses, according to the note.

The original AmazonGo in downtown Seattle required more than $1 million in hardware alone, a person familiar with the matter has said. Adding 3,000 convenience stores would make AmazonGo among the biggest such chains in U.S.

Though an expensive investment, the analysts said the benefits of gleaning hints at human behavior will outweighing the costs.

“Go’s technology and offering furthers Amazon’s efforts to build deeper, more integrated relationships with consumers, with the goals being to increase data capture and understanding of consumer demand and intent and ultimately drive higher/more frequent purchase behavior,” they wrote. “Over time, Amazon’s ability to use all of these datasets should lead to a more customer-focused brick and mortar shopping experience and a higher share of wallet flowing toward Amazon.”