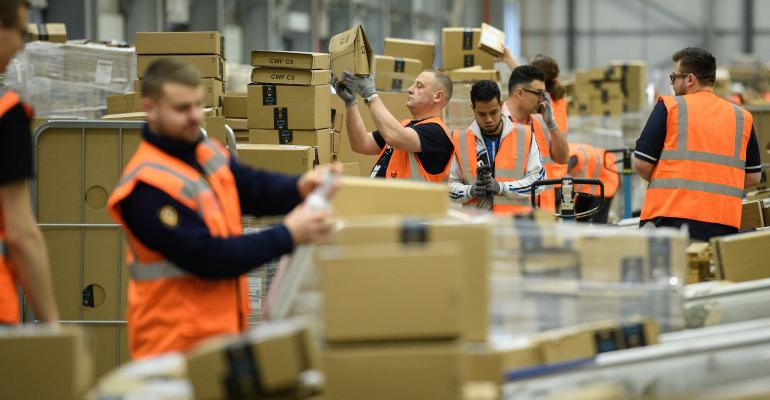 Brick-and-mortar sales during the Thanksgiving weekend went down 6.6 percent, according to RetailNext.

(Bloomberg)—The presents may not yet be wrapped and under the tree, but at least they’re in transit with a tracking number. With spending increasingly moving online, a new set of winners is emerging as the Black Friday holiday shopping weekend comes to a close.

“We are seeing a fundamental shift in who’s considered winners and losers coming out of Black Friday this year,” Bloomberg Intelligence analyst Jennifer Bartashus said. “Whether you’re talking about department stores, mass merchants or specialty apparel chains, consumers are voting with their online spending and driving this evolution.”

Prognosticators went into Thanksgiving expecting this holiday shopping season to be one of the best since the recession, possibly rivaling the boom days of the mid-2000s. The economy is growing, gas prices are low and median wages have been rising. But not everyone can come out on top. Here’s a look at who’s having a merry season -- and who’s out in the cold.

Gone are the days of Thanksgiving-night stampedes. Americans spent a record $7.9 billion online on Cyber Monday, up more than 19 percent from last year’s totals, making it the largest digital shopping day of all time in the U.S., according to Adobe Analytics. But mobile and desktop spending wasn’t just a Monday phenomenon: It came on top of the $3.7 billion spent on Thanksgiving Day and $6.2 billion on Black Friday itself.

Amazon.com Inc. reaped a lot of those rewards. The internet retailer saw its biggest shopping day in history on Cyber Monday, with the most products ordered worldwide than any other day. Amazon customers ordered more than 18 million toys and 13 million fashion items on Black Friday and Cyber Monday combined, with the new Echo Dot Alexa device the top selling product on Amazon globally over the holiday weekend.

Despite Amazon’s encroachment, big-box retailers still know how to pull off a dynamite Black Friday. Walmart Inc., Best Buy Co. and Target Corp. all kicked off holiday promotions weeks before the big weekend but still found ways to entice buyers with the Black Friday doorbusters and promotions they’ve become famous for.

Target, which added about 500 square feet of additional space for toys across 500 stores this season, was rewarded. Walmart also benefited from the absence of Toys “R” Us. “Target and Walmart seemed to do the best job of picking up toy market share,” Barclays analysts said in a note. Best Buy was a winner in TV sales, KeyBanc analysts wrote, helped in part by its unlikely ally -- Amazon, which has partnered with the nation’s biggest electronics chain to sell smart televisions embedded with Amazon’s Fire platform.

Kohl’s Corp. is another retailer that has aligned with the online giant, setting up Amazon-branded shops in about 30 stores and processing returns of Amazon purchases. Like Walmart and Target, Kohl’s benefited from high demand for kitchen appliances like the cult favorite Instant Pot, which all retailers discounted heavily over the weekend to entice shoppers to move beyond toys and televisions.

The two biggest sellers on Cyber Monday were both toys: WowWee’s Fingerlings and L.O.L. Surprise by MGA Entertainment Inc., both of which had made Toy Insider’s Hot 20 list. Nintendo Switch came in third, though it was the No. 1 online purchase made on Thanksgiving Day itself, Adobe data show.

L.O.L. Surprise brand -- a line of collectible dolls and accessories that kids unwrap -- sold well at Target, according to store manager Rob Stermann. With the store open earlier on Thanksgiving Day compared with previous years, that attracted entire families to come shop, rather than just parents. Families with kids tend to shop the entire store, rather than just coming for one big item, he said.

Although some crowded big-box and department stores made it look like the 2000s, the overall traffic trend was down. U.S. store traffic was down 1 percent on Thanksgiving and Black Friday combined versus 2017 levels, according to ShopperTrak. RetailNext, which measures store traffic, found that brick-and-mortar sales during the four-day period from Thanksgiving to Sunday were down 6.6 percent.

“Overall spending leading up to and including Black Friday is higher than last year, though online shopping likely detracted from in-store visits,” Bloomberg Intelligence analysts Bartashus and Poonam Goyal said. “With many doorbuster promotions available online and in stores, there was less motivation for customers to venture to stores.”

Mall-staple Sears Holdings Corp., which is still open for business this holiday despite an October bankruptcy filing, said Black Friday traffic for Sears and Kmart was “softer than last year.” According to Peter Boutros, president of the Kenmore, Craftsman and DieHard brands, shoppers are “cherry picking deals and going to different retailers” to snag the cheapest prices.

Some legacy retailers also found their less-than-robust websites couldn’t keep up with the influx of traffic. Home-improvement store Lowe’s Cos. temporarily showed an error message on Friday afternoon. J. Crew’s homepage went down Friday, too, with a full-page banner asking customers to “hang on a sec” amid higher than normal traffic. Lululemon Athletica Inc. said on Facebook late Thanksgiving that it was “working hard to get the dot com running smoothly again.” Even Walmart reported some issues amid higher than expected web traffic.

Mobile shopping garnered more than half of all traffic to retail sites on Thanksgiving and Black Friday, according to data provider SimilarWeb, and some retailers missed out on the surge. And for those retailers who did just fine online, the surge of discounting shipping offers will hit their margins come February.

“Many retailers have upped their free-shipping game, as the battle for superior convenience and speedier delivery rages on,” said Scot Ciccarelli, an analyst at RBC Capital Markets.

It appears gun sales were down this holiday season. While there is no exact count of firearms sold in America, a common barometer is the bureau’s National Instant Criminal Background Check System, and it showed background checks down more than 10 percent on Black Friday this year.

Buying guns has become something of a Thanksgiving tradition in the U.S., with retailers offering discounts and giveaways on firearms and accessories for the holiday shopping rush. But gun sales declined after the election of Donald Trump, whose Republican party generally opposes restrictions to firearm access.