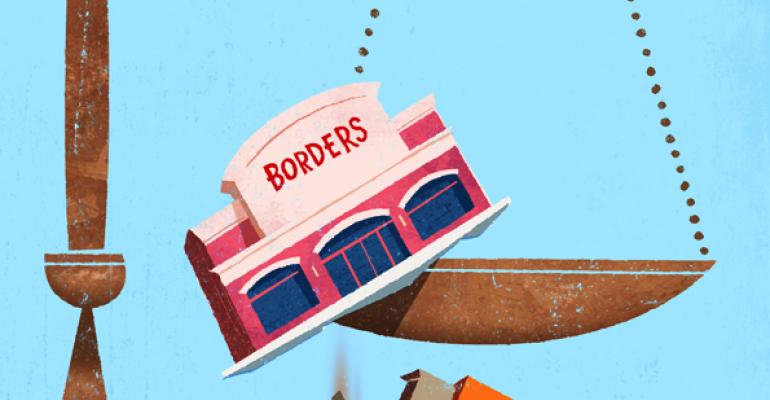 Is Barnes & Noble Heading the Way of Borders?

Recent announcement by Barnes & Noble founder Leonard Riggio that he no longer plans to buy the retail portion of the business has industry pros concerned. While the country’s last remaining big-box bookseller is nowhere near its final days, many in the retail industry were hoping the buyout would disentangle Barnes & Noble’s core business from its money-bleeding Nook venture and allow the company to find a winning formula for its stores with help from private money.

Now that Riggio withdrew his plans, Barnes & Noble’s management remains stuck with the Nook, reversing its earlier decision to discontinue the development and production of new Nook tablets in-house. And it doesn’t look promising that the chain’s retail group CEO Mitchell Klipper, who oversees Barnes & Noble’s bricks-and-mortar stores, has sold 401,000 of his shares of the company stock in a transaction valued at more than $5 million, in the wake of Riggio’s announcement.

“They don’t have enough money to keep putting into the Nook, and their book business is terrible because Amazon is chewing up their [market share],” says Howard Davidowitz, chairman of Davidowitz & Associates Inc., a New York City-based retail consulting and investment banking firm. Riggio’s decision not to buy out the retail division means: “more losses, more deterioration, more closed stores.”

For the first quarter of fiscal 2014, ended July 27, Barnes & Noble reported that same-store sales in its core retail division fell 9.1 percent and same-store sales at its college bookstores fell 1.2 percent, while sales of the Nook and associated content and accessories fell 20.2 percent. The company’s management expects sales to continue falling through the remainder of fiscal 2014.

“Nook investments in hardware design and manufacture are perceived as a perpetual cash burn given competitive disadvantages to Apple and Samsung, and weak device sales mean weak content sales. Both factors limit potential for Nook profitability and growth, and we believe profitability and growth are required for Nook to be valued as a going concern.”

Not all is lost

The good news is that Riggio’s decision to forgo a buyout of the company likely has more to do with his age (he’s 72) than with a belief that Barnes & Noble is unsalvageable, according to Davidowitz. To turn around a chain of that size, at a time when booksellers as a group are losing market share, would be a massive, multi-year project, Davidowitz notes, and Riggio might not want to invest that much of his self in the job.

There remains a possibility that a private equity firm may come along and buy out the retail portion of the business, says Neil Stern, senior partner with McMillan Doolittle LLP, a Chicago-based retail consulting firm. But the obstacle may once again be the Nook, which today takes up a significant amount of space inside Barnes & Noble stores.

“It’s certainly a classic private equity play, assuming you can effectively decouple those two business [retail and the Nook],” Stern notes. “Up until about a year ago, this was a very stable retail business. That is not the case today. Their most recent numbers are pretty scary.”

Both Davidowitz and Stern believe there remains a space in the marketplace for a bricks-and-mortar bookseller. But in order to occupy it comfortably, Barnes & Noble would need to both tinker with its in-store merchandise selection, which currently runs the gamut from physical books to Nook devices and accessories to lifestyle products like gifts and candy, and to somehow downsize its stores.

“Barnes & Noble stores are too big, because demand [for their products] is lower,” says Davidowitz. “But I think there is a need and a desire in the marketplace for a bookstore. That’s why I think private equity might be interested in it. The book business is still very much cash flow positive. The losses are in the Nook.”