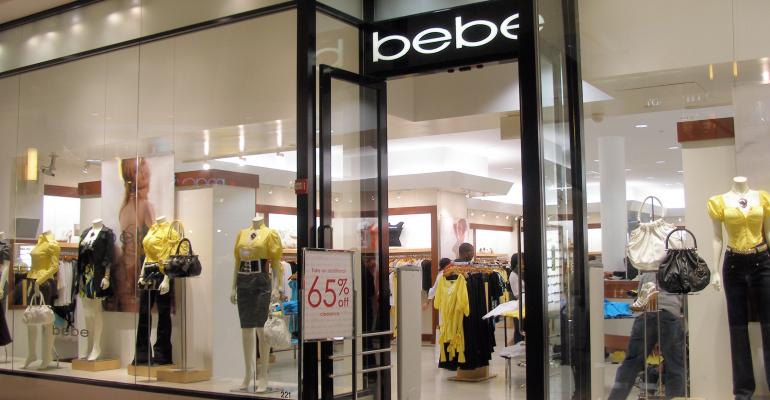 Bebe Said to Be Closing Stores in Brick-and-Mortar Retreat

Unlike many retailers, Bebe has no significant debt. But the company has lost about $200 million over the past four years, and negotiating with landlords to get out of leases may prove difficult.

(Bloomberg)—Bebe Stores Inc., a women’s apparel chain with locations across the U.S., is planning to shut its stores and seek a turnaround as an online brand, according to people familiar with the situation.

The company is trying to close the locations without filing for bankruptcy, said the people, who asked not to be identified because the efforts aren’t public. However, Chapter 11 may be required if enough landlords aren’t willing to negotiate, they said. The company, known for selling trendy going-out apparel to young women, has been operating about 170 boutique and outlet stores.

Bebe would become the latest retailer to shed brick-and-mortar stores and hitch its fortunes to e-commerce. Kenneth Cole Productions said in November that it would close almost all of its locations, concentrating instead on its online, international and wholesale businesses. A consumer shift to the internet has contributed to several retail bankruptcies this year, including those of HHGregg Inc., Gordmans Stores Inc. and RadioShack.

Unlike many retailers, Bebe has no significant debt. But the company has lost about $200 million over the past four years, and negotiating with landlords to get out of leases may prove difficult. The retailer didn’t immediately respond to requests for comment.

The shares fell as much as 31 percent to $4.42 after Bloomberg reported on the plan. That was the biggest intraday decline since May 2016.

Manny Mashouf, who founded the company in San Francisco in 1976, owned 57 percent of its stock as of Jan. 26. He remains chairman and chief executive officer of the company, which touts its apparel as fashion for “the confident, sexy, modern woman.” Mashouf, now in his late 70s, created the brand as a twist on Shakespeare’s “To be or not to be.”

Last year, Bebe sold half of its brand to Bluestar Alliance LLC to develop a wholesale licensing business, a move that helped raise cash.

The stock has fallen more than 80 percent over the past two years, though it began to rebound last month. It had been up 26 percent in 2017 through Monday’s close.

The company, now based in the San Francisco suburb of Brisbane, focuses on women’s apparel and accessories. Bebe already announced some store closures for the current year. It said in February that it would be shuttering as many as 25 locations in fiscal 2017, reducing square footage by about 16 percent.