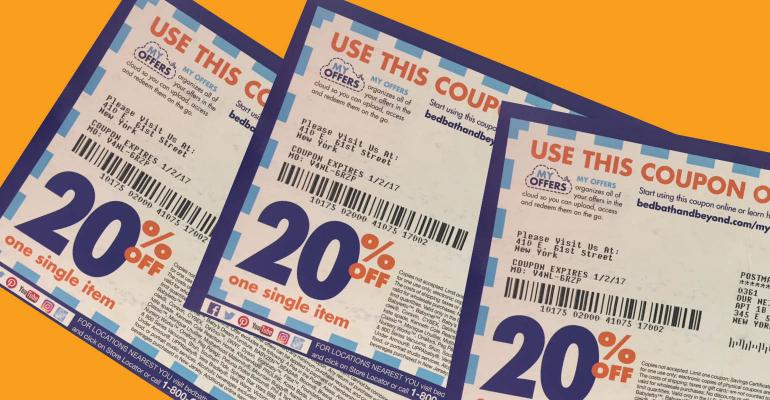 At just $2.8 billion in market value, or less than $20 per share, Bed Bath & Beyond is now noticeably cheap.

(Bloomberg Gadfly)—Bed Bath & Beyond Inc.'s perpetual discounts, in coupon form, are so well-known that they regularly make it into comedy bits. But few investors are laughing -- the retailer's shares recently fell to their lowest level since 2000, hurt partly by all this price-cutting.

At just $2.8 billion in market value, or less than $20 per share, Bed Bath & Beyond is now noticeably cheap. With an enterprise value of a little less than 4 times forward Ebitda (including existing debt totaling just 1.5 times Ebitda), the company makes an appealing buyout target.

While GOP tax proposals may roil the returns and popularity of leveraged buyouts, that won't be a roadblock to the small portion of such deals featuring low borrowing levels. A potential take-private of Bed Bath & Beyond would fit in this category.

For deals with leverage of 5 times a borrower's Ebitda or less, the lost tax shield from the GOP's proposed cap on interest deductibility would be more than offset by a cut in the corporate tax rate to 20 percent, according to Goldman Sachs analysts. Such deals only comprised 19 percent of U.S. leveraged buyouts this year through Oct 31, according to data from LCD, an arm of S&P Global Market Intelligence.

To be sure, any suitor would need conviction that Bed Bath & Beyond has a viable future in the changing retail landscape. And the chain's future looks bleak. For one, declining traffic to its stores has offset its growth in e-commerce.

Its operating margins have been squeezed. That's partly because it's footing the bill for free shipping for many online orders -- but those big, blue-and-white "20 percent off" coupons that regularly appear in your mailbox don't help either.

There's a case to be made that Bed Bath & Beyond could thrive by transforming into the Best Buy Co. Inc. of the home-goods category. The electronics giant is managing to make the big-box format work just fine in the digital era, partly by slashing costs, but more importantly by making its stores into experiential playgrounds with high-touch customer service.

You could imagine Bed Bath & Beyond doing more visual storytelling in its stores to show, say, how to set your dining room table for Thanksgiving dinner or how to use cabinet organizers to make better use of space in your pantry. The retailer could go bigger with interior design services, much like Best Buy is doing with its in-home advisors program.

But even if Bed Bath & Beyond were to do that, it's fighting an uphill battle. Target Corp. has sharpened its home assortment in the past couple of years and shows no signs of slowing down: Hearth & Hand with Magnolia, a new brand designed by HGTV stars Chip and Joanna Gaines, hits stores this week.

Meanwhile, upstart digital shop Wayfair Inc. is coming on strong, grabbing market share from more established retailers. And never count out Amazon.com Inc., which is now selling private-label home goods under brands such as Pinzon and AmazonBasics and is reportedly investing in supply chain updates that will help it handle bulky pieces of furniture.

And don't forget that Bed Bath & Beyond is more than just its flagship chain. There's the innovative One Kings Lane brand, which is surely an asset. But the company also owns a stable of retail misfits that collectively make up about one-third of its total store portfolio. Good luck to any buyer trying to figure out what to do with those other brands.

Other potential buyers include retail specialists such as Leonard Green & Partners LP, which coincidentally owned a small stake in Bed Bath & Beyond through the end of 2015; they may be lured in by price alone.

For a cashed-up private equity firm that thinks it can fight the retailer's woes, Bed Bath & Beyond is almost too cheap to ignore.

Gillian Tan is a Bloomberg Gadfly columnist covering deals and private equity. She previously was a reporter for the Wall Street Journal. She is a qualified chartered accountant.