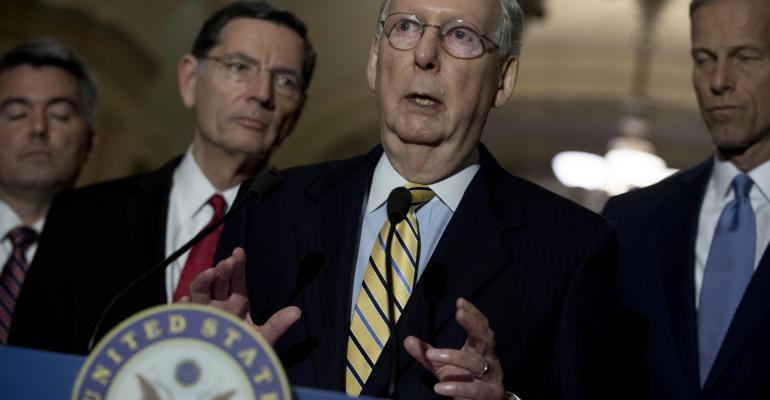 The controversial provision is a centerpiece of House Republican leaders’ blueprint for overhauling taxes because it would raise more than $1 trillion over 10 years to help offset the cost of individual and corporate rate cuts.

(Bloomberg) — House Ways and Means Chairman Kevin Brady is forging ahead and planning to hold a hearing next week on the proposed border-adjusted tax, even as the top Senate Republican said the measure probably won’t pass his chamber.

“One key element of that hearing will be border adjustment and the role that it plays as a crucial element in tax reform to level the playing field for made-in-America products,” Brady told reporters Tuesday.

The controversial provision is a centerpiece of House Republican leaders’ blueprint for overhauling taxes because it would raise more than $1 trillion over 10 years to help offset the cost of individual and corporate rate cuts. Brady and House Speaker Paul Ryan have continued to defend it, even as it’s faced attacks from industries that import goods as well as criticism from the White House and Senate Republicans.

Brady has said he wants a tax overhaul to get done in 2017, and on Tuesday he pushed back against the idea that distractions from the White House were making that goal harder. White House controversies -- the firing of FBI Director James Comey, reports that Trump leaked highly classified information to the Russians and an allegation that the president asked Comey to end the investigation into his former national security adviser -- have dominated political discussions on Capitol Hill, sidelining the GOP’s legislative agenda.

Senate Majority Leader Mitch McConnell said Tuesday in an interview with Bloomberg News that he’d like to see “less drama” from the White House. “I think it would be helpful if the president spent more time on things we’re trying to accomplish and less time on other things,” he said. During the interview, McConnell emphasized the need for rewriting the tax code, but didn’t commit to completing that task in 2017, and wouldn’t put a deadline on it.

The proposal would replace the 35 percent corporate rate with a 20 percent tax on companies’ domestic sales and imported goods. Exports would be exempt. Retailers, oil refiners and other industries that rely on imports say the tax would raise consumer prices on basic items. The tax’s proponents say it would result in a strengthening dollar, evening out the tax’s effect on prices over time. But some economists question whether exchange rates would react predictably.

Treasury Secretary Steven Mnuchin and National Economic Council Director Gary Cohn are scheduled to meet with Democratic and Republican members of the tax-writing Senate Finance Committee Wednesday to discuss tax policy, according to two people familiar with the meeting who asked not to be named because the details are private.

Brady didn’t budge when asked if Senate opposition to the border-adjustment concept would change his plans. “I’ll continue to bring to the table our solutions on how to address that challenge in the current tax code,” the Texas Republican said, adding he’s open to a “new approach and designs on border adjustment.”

Freedom Partners, the conservative group associated with billionaire brothers Charles and David Koch that has opposed the border-adjusted tax, kept up its pressure this week. The group released a report Wednesday morning that said the tax would threaten high-paying manufacturing jobs and hurt the energy sector even if there were a partial currency adjustment.

The House Ways and Means Committee is holding its first tax-related hearing on Thursday about economic growth.