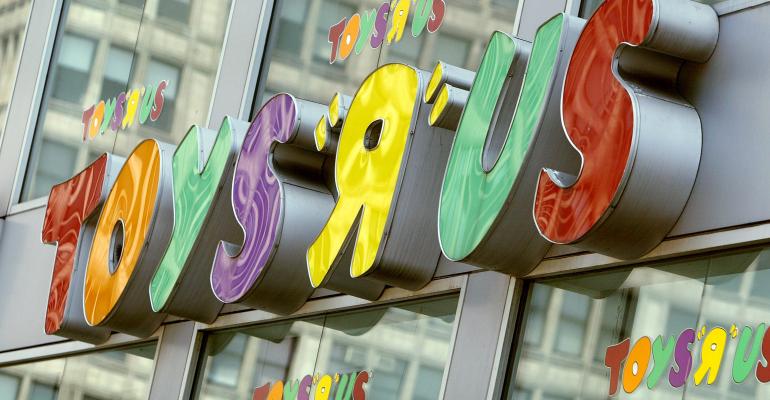 Can Toys ‘R’ Us and Bon-Ton Come Back from the Dead?

Toys ‘R’ Us lenders have called off a bankruptcy auction and are looking at opening new stores under the old brand name.

After filing for bankruptcy and shuttering more than 700 U.S. stores in June, the iconic toy retailer Toys ‘R’ Us might be resurrected just months later, and Geoffrey the Giraffe could have a gig again.

A group of lenders that now controls Toys ‘R’ Us decided to call off the bankruptcy auction to sell the company’s intellectual property. Instead, the lenders will hang onto the Toys ‘R’ Us and Babies ‘R’ Us brand names, website domains, registry lists and other assets, including mascot Geoffrey. The group of various hedge funds that owns the company decided that rebooting the chain would have more value than selling it off for parts.

Toys ‘R’ Us, which was struggling with more than $5 billion in debt, filed for bankruptcy in 2017. The company planned to reorganize, unload some debt and continue to stay in business. However, after a dismal holiday shopping season and weakened confidence from toymakers and creditors, the lenders were ready to pull the plug.

Now, these same lenders have had a change of heart and are looking to reorganize the assets into a new company that will maintain the current license agreements and invest in new retail operating businesses.

They want to “open a new Toys ‘R’ Us and Babies ‘R’ Us branding company that maintains existing global license agreements and can invest in and create new domestic retail operating businesses,” according to last week’s bankruptcy court filings. They also want to expand the retailer’s international presence and further develop its private brands business.

The plan is to open stores in the U.S. and abroad. The lenders are working with potential partners to develop new ideas for Toys ‘R’ Us and Babies ‘R’ Us stores that could  “bring back these iconic brands in a new and re-imagined way,” according to a company release.

The new ownership group is composed of about 10 hedge funds including investment firm Angelo Gordon, which had no comment on the plans, and Solus Alternative Asset Management, which didn’t respond to a request for comment.

How could it play out?

Few details have emerged regarding how the retailer’s revival would work, including how many stores would open and in what locations. However, the company will be starting from scratch, because Toys ‘R’ Us has sold most of its real estate including stores and distribution centers.

Toys ‘R’ Us owners also could decide to license the name and brand to another group and let them tackle the huge job of revitalizing a brand.

“While there are certainly positive brand associations…  it is another thing to resurrect a brand at retail,” says Neil Stern, senior partner at Chicago-based consulting firm McMillan Doolittle.

“It requires a significant organization to replicate the buying and operations necessary to operate retail stores,” he notes. “The Toys ‘R’ Us brand is incredibly powerful and there is certainly opportunity for stores. They would likely not be full 40,000-sq.-ft. boxes, but smaller, or a seasonally-driven model makes sense. Think Spirit Halloween.”

“Toys ‘R’ Us should be another figment, in my opinion, of the Apple Store,” she notes. “It should be all about touching and feeling and kind of being able to lose yourself. I think Toys ‘R’ Us over time became no different than shopping at a Wal-Mart. It almost needs to be like a pseudo-daycare for your kids.”

Toys ‘R’ Us has faced fierce competition from lower-priced retailers, including Wal-Mart, Target and Amazon.

“It’s speculative on my part, but if I owned that company, from what I know about the business… I would be going to a smaller footprint and having a third to half of that store flex in its use,” adds Nick Egelanian, president of SiteWorks Retail Real Estate Services, a retail real estate consulting firm based in Annapolis, Md.

For most of the year, when the toy business relies heavily on birthday parties, the chain could focus more heavily on party and baby products, he notes. And when the fourth quarter and end-of-year holiday sales coming around, it might make sense to focus 90 percent on toys and “become a more lean retailer.”

“I don’t know what the exact square footage is on that, but I know it’s not what they had,” Egelanian says.

A $6.6 billion leveraged buyout by private equity firms in 2005 hurt Toys ‘R’ Us, as it continued to struggle with debt. The investors wanted to squeeze some value from the company’s real estate assets.

“Over the past eight or 10 years, the company was overleveraged, and there was no investment in the stores, no right-sizing of the stores, and no significant internet strategy,” Egelanian says. “The operators were financial guys and real estate guys. They were not retailers, so they ran into problems.”

He adds that the fact that the brand now exists without an operating business could be an opportunity to create a new toy store under the same name. Moreover, Egelanian says there’s no reason to believe that there can’t be a single, dominant national player in the toy sector, as long as the stores appeal to customers, are the right size and are run by experience retail operators.

Toys remain a very big business, he notes. “But it’s a highly seasonable business, so you have to run that business differently than you run other businesses. You have to be heavily inventoried in the fourth quarter and manage your cash during the other three quarters.”

The U.S. toy industry is estimated at about $27 billion.

Bankrupt department store chain Bon-Ton is looking to reopen stores now that a new owner has acquired its brand.

Merillville, Ind.-based technology and retail investment firm CSC Generation Holdings purchased the rights to Bon-Ton and its subsidiary department store chains, including Herberger’s, Carsons and Younkers. It acquired the retailer’s trademarks, websites and other intellectual property.

While the new Bon-Ton will focus heavily on its online presence, CSC is negotiating with landlords about reopening stores in Minnesota, Colorado, Illinois, Wisconsin and Pennsylvania, reported the Star Tribune. Two-thirds of the stores will reopen in closed Bon-Ton locations, while one-third will be near former stores, said the company’s CEO Justin Yoshimura. The stores would be considerably smaller and carry different inventory than the original chain.

“CSC Generational Holdings has competencies in the e-commerce space, but does not have experience in operating retail stores,” Stern says. “It will not be an easy task to run stores as complex as a department store due to this, but landlords will likely want to cooperate for trial.”

Can bankruptcy provide retailers with a fresh start?

“The whole point of going bankrupt is getting smaller, tighter, better,” Efros says. “Years ago, it used to be the path of least resistance. ‘I’m going to hang on until the end.’ But in all of these cases, it would have been death by a million paper cuts. So, in a sense, it’s best to just do it because everybody else is doing it, and then you just resurrect yourself. There’s not really one that has gone away and truly gone away. They all seem to be coming back.”

She points to retailers like Claire’s and Gymboree that have emerged from bankruptcy.

Plus, both the Toys ‘R’ Us and Bon-Ton brands have equity behind them, Efros notes.

“What I mean by that is they mean something to the consumer,” she says. “They’ve been around for a long time. It’s actually the brand that has the equity around it, and so that’s what they’re trying to rebuild.”