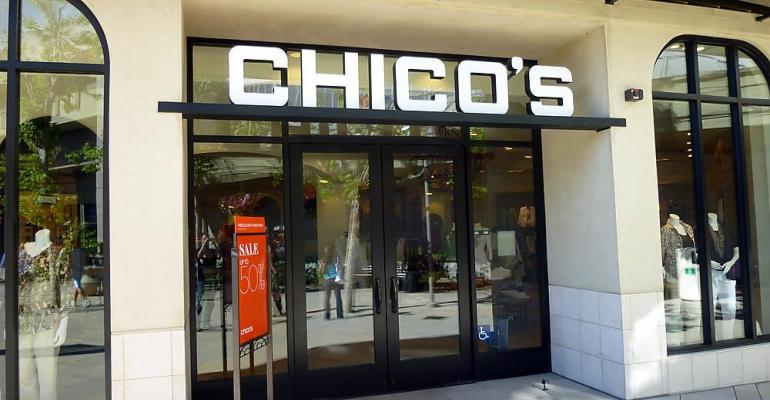 Chico's Weighs Buyout While Trying to Move Beyond the Mall

(Bloomberg)—Malaise in the shopping mall is certainly no secret, with thousands of stores shutting and some familiar names disappearing. Struggling women’s apparel merchant Chico’s FAS Inc. now has a potential lifeline -- which it may throw back.

The retailer said Friday it would review an unsolicited buyout bid from Sycamore Partners, the owner of office supply giant Staples Inc. and department-store chain Belk, noting that it had previously rejected a higher offer from the private equity company.

Chico’s is part of a hard-hit category that targets mature women. Its peers include clothing stores like J. Jill Inc. and Dressbarn, operator of Ann Taylor and several other labels, which Bloomberg reported is on the block. Merchants in the sector have struggled to find their footing with competition from department stores and online brands.

“The reality is there are very few of them left,” Instinet analyst Simeon Siegel said in an interview. Their customers tend to be mothers who won’t spend on themselves “if anything goes bad,” Siegel said.

“The Chico’s FAS Board of Directors will carefully review the proposal to determine the course of action that it believes is in the best interests of Chico’s FAS shareholders,” the company said in a statement.

The offer price discounts the strength of the company’s brands and potential for a turnaround, B. Riley analyst Susan Anderson wrote in a note Friday.

Still, Sycamore’s interest is a positive. There’s been little private equity interest in specialty retail for several years given the decline of the shopping mall, according to Anderson. Once-familiar names like the kids apparel chain Gymboree Inc. and discount shoe seller Payless Inc. liquidated this year after second trips to bankruptcy court.

Chico’s net income plunged by almost two-thirds last fiscal year, while its stock has tumbled 60% in the past 12 months. It closed on Friday at $3.99. Still, Chico’s has advantages. Unlike some of its peers left with unmanageable debt following leveraged buyouts, the company owes just $57.5 million, leaving more resources available for a turnaround.

The Ft. Myers, Florida-based chain also operates the Soma lingerie and White House Black Market clothing chains. Earlier this year, it announced plans to close 250 of its more than 1,400 stores, saying it wants to “rebalance” its physical and digital presence.

“Retail is changing, and Chico’s FAS believes that success lies in the intersection of digital and physical,” the company said. “We are positioning Chico’s FAS for success and look forward with confidence in our ability to grow in an evolving retail environment.”

The company is selling clothing and intimate apparel in partnerships with ShopRunner, Amazon.com and QVC Inc. It introduced its own online lingerie brand, TellTale, which will compete with now-established digital rivals such as ThirdLove and Stitch Fix.

“They need a customer,” Siegel said. “And in the world of the everything store, one very targeted category doesn’t leave you much room for error.”