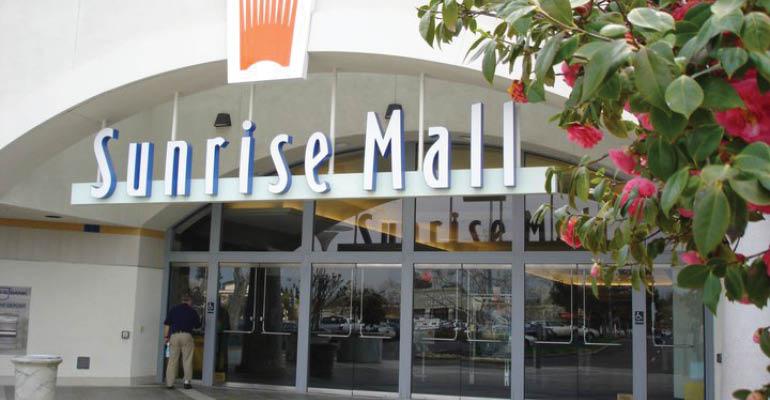 Department Stores Cling to Power Over Landlords on Mall Upgrades

The aging retail juggernauts are exploiting contracts with landlords that give them the power to dictate how a property can be developed, covering everything from parking to signage.

(Bloomberg)—The owners of the Sunrise Mall in Northern California have a vision for updating the 45-year-old center. Tenants there are making it difficult to get it done.

Proposed changes have been held up by the property’s department stores, which include Macy’s, J.C. Penney and Sears. Shoppers in the area, meanwhile, are turning to other, more modern centers as the redevelopment stalls.

Department stores may be struggling to draw customers, but they haven’t relinquished their hold on America’s malls. The aging retail juggernauts are exploiting contracts with landlords that give them the power to dictate how a property can be developed, covering everything from parking to signage to what types of operators are allowed into a center.

Known as reciprocal easement agreements, or REAs, the contracts were put in place decades ago, when landlords relied on department stores to lure suburban shoppers. A majority of malls in the U.S. are encumbered by an REA, tying developers’ hands as they try to keep up with rapid shifts in retailing, according to Ryan Rivera, a partner at law firm Hartman Simons & Wood LLP.

“Twenty or 30 years ago, they made sense,” Rivera said. “Today they are a hindrance.”

Department stores, hit particularly hard by the rise of e-commerce and changing consumer tastes, have been in decline for 15 years, according to DJ Busch, a managing director at real estate research firm Green Street Advisors LLC. The dated restrictions imposed by the REAs are partly why many malls have struggled to evolve, he said. In many cases, what worked 50 years ago is now obsolete.

For example, “department stores are extremely possessive of their parking spaces,” Busch said. “It’s not hard to argue they don’t need as much as they used to.”

One of the thorniest issues for mall owners is that REAs give anchor stores the final say over how a property can be used. Developers are often blocked from installing businesses such as gyms, bowling alleys and medical services, according to Rivera. Those are exactly the types of tenants landlords are pursuing, to fill space left by shuttered stores and offer customers experiences they can’t find online.

“These documents prohibit any other use that’s inconsistent with a first-class shopping center,” Rivera said. “Think of a bowling alley in a typical enclosed regional mall in the ’80s -- they weren’t first-class operations.”

GGP Inc., the second-largest owner of U.S. malls, hasn’t had any of its redevelopment plans bogged down by REAs, according to Chief Executive Officer Sandeep Mathrani. As long as the landlord’s proposal brings in more shoppers, anchor tenants won’t fight against a new use, he said.

“Department stores want traffic, and anything that generates traffic, they are not going to object to,” Mathrani, whose company has been proactive in filling empty stores, said in an interview. “If you bring in a noxious use, then they could object.”

For Ami Ziff, director of national retail at Time Equities Inc., which buys outdated malls and renovates them, the REA is among the first things he looks at when evaluating an acquisition. Signage restrictions are often a sticking point. Anchor tenants typically don’t let other vendors place signs on the exterior of an enclosed mall, effectively funneling foot traffic through their stores. New tenants want to install their own signs, Ziff said.

“The anchors own the outside of your mall,” he said.

It’s theoretically in the best interests of all involved -- including the department stores -- to refresh a struggling center’s tenant mix with companies that are likely to draw larger crowds. Still, different tenants are bound to have different ideas about what is best for the property, Ziff said.

These contracts are in place for as long as a tenant occupies the space, so there is little a landlord can do to get out of them, according to Ziff. It’s not uncommon to resolve such disputes by writing a check to pay off an anchor that objects to a modification of an REA, he said.

Whether proposed amendments to an REA are beneficial for a center is becoming increasingly irrelevant to department stores that are facing a bleak and uncertain future, according to Dan Whalen, who scouts locations for eatery chain MOD Pizza. Some simply leverage the REA to demand payment from the mall owner, said Whalen, who was a director of development at mall landlord Starwood Retail Partners before joining MOD Pizza.

“They are going to hold out their hands because they can,” Whalen said.

At the Sunrise Mall, about 15 miles (24 kilometers) outside Sacramento, California, a joint venture of Alliance Bernstein LP and Spinoso Real Estate Group planned to update the 1.2 million-square-foot (111,500-square-meter) property with new tenants and uses when they bought it in 2015. Progress at the site has been slow, and the mall continues to lose business to more-modern shopping centers in the area, according to reports in local media including the Sacramento Bee.

The mall’s department stores have hampered development by holding up proposed changes, according to people with knowledge of the negotiations. Macy’s Inc. was seeking several million dollars from the landlords in order to move forward with the upgrade, said the people, who asked not to be identified because the talks are private.

A representative for Macy’s declined to comment, while Spinoso didn’t return calls. Jonathan Freedman, a spokesman for Alliance Bernstein, said the firm is “in a constructive dialog to maximize the value of the mall and unlock the inherent value of the site to the benefit of all constituents.”

A Sears Holdings Corp. spokesman, Larry Costello, said REAs “benefit all parties tied to a mall property and these agreements have been in place for decades.” A representative for J.C. Penney Co., the mall’s other anchor tenant, declined to comment.

Many mall companies include a multimillion-dollar payment to the anchor tenant in their calculation for the cost of redeveloping a property, according to Green Street’s Busch. Typically, the department stores use the cash to renovate their own space, he said.

“They are trying to flex the power that they were provided when these things were signed,” Busch said.