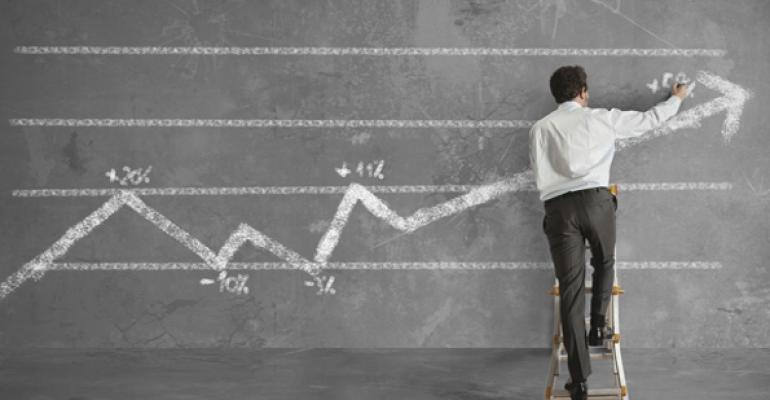 While overall economic growth remains slow, consumers appear to be weathering the storm. This is particularly impressive given the one-two punch of higher taxes and spending cuts facing the country’s consumer base. Retail sales growth, though inconsistent, has generally remained positive. However, these favorable indicators have not translated into significant or consistent absorption of neighborhood and community shopping center space. The limited demand that exists is primarily for smaller units of less than 5,000 sq. ft. while landlords continue to have a more difficult time leasing larger boxes.

As a result of these market headwinds, the U.S. second quarter vacancy declined by just another 10 basis points to 10.5 percent. On a year-over-year basis, the vacancy rate has declined by 30 basis points. In our view, the drag on economic growth from fiscal policy and higher interest rates is dampening demand for retail space that might otherwise be accelerating in response to reasonable levels of employment growth and new household formations. It will likely be late this year at the earliest before the economy creates the opportunity for a faster pace of vacancy rate reduction. While the outlook for the neighborhood and community shopping centers may not be as bleak as it was a few years ago, it is important to recognize that the current U.S. vacancy rate is just 60 basis points below the sector’s all-time high of 11.1 percent set during 1990 and the third quarter of 2011 and remains well above the cyclical trough of 6.7 percent set during the second quarter of 2005.

Asking and effective rents both grew by 0.3 percent during the quarter, a pace essentially unchanged from the first quarter of 2013 and representing the seventh consecutive quarter that both asking and effective rents have increased. However, the combination of the current level of vacant stock, and a net absorption rate insufficient to exert meaningful downward pressure on availabilities, continues to translate into a glacial pace of rent growth. 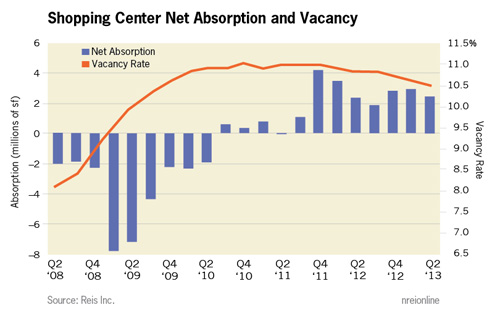 The top 12 markets ranked by highest average effective rent are located in California, the New York suburbs, and the Washington, D.C., suburbs. These are all affluent metro areas, providing relatively strong demand for consumer goods. Moreover, their locations as coastal markets create constraints on new construction which help to keep new supply in check. Conversely, contracting industrial economies such as Indianapolis, Ind., as well as Cleveland, Columbus and Dayton, Ohio, continue to have some of the highest vacancy rates because of weak demand for consumer goods and retail space.

The recovery in regional mall vacancy took a breather during the second quarter. The national vacancy rate was unchanged at 8.3 percent, marking the first time this segment of the market did not register a decline in vacancy since the third quarter of 2011 when mall vacancies reached their all-time high of 9.4 percent. Asking rent growth, though still positive, was identical to last quarter at 0.4 percent. On a year-over-year basis, rent growth slightly accelerated from 1.2 percent last quarter to 1.3 percent this quarter. Although demand remains weak, new supply remains virtually nonexistent, which should support the ongoing recovery in the segment. Only one new mall, located in Salt Lake City, has been constructed in the U.S. in the last seven years. However, construction is expected to recommence on the stalled and partially completed mall near MetLife Stadium in Northern New Jersey. 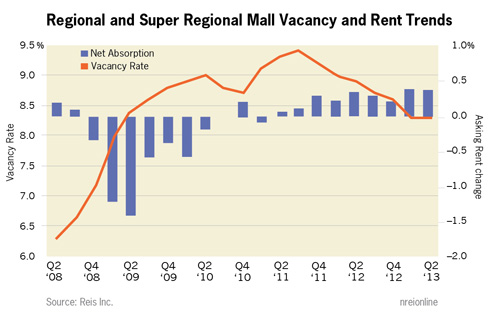 We expect improvements through the remainder of 2013 to be modest at best. For neighborhood and community centers, both net absorption and new construction are anticipated to increase slightly during the latter half of the year. However, there will only be moderate increases with a significant amount of the net absorption stemming from pre-leased space in newly completed projects. Demand for older space is projected to remain near historically low levels as tenants continue to prefer newer projects. As a result, vacancy is only expected to contract by roughly 20 basis points through the second half of the year. Rent growth is not likely to accelerate and concessions will remain in place this year because of the still-elevated vacancy rate.

Even with the slight pause during the second quarter, malls should continue to recover throughout the balance of 2013. With no new construction on the horizon and net absorption projected to remain positive, we expect mall vacancy rates to continue to decline toward 8 percent. Rent growth is expected to accelerate in the coming quarters, especially for the highest-quality malls. Landlords in these high-caliber centers have recognized that the pendulum has swung back in their favor and they are adjusting rents and concessions accordingly.

Brad Doremus is senior analyst and Victor Calanog is head of research and economics for the New York-based research firm Reis.