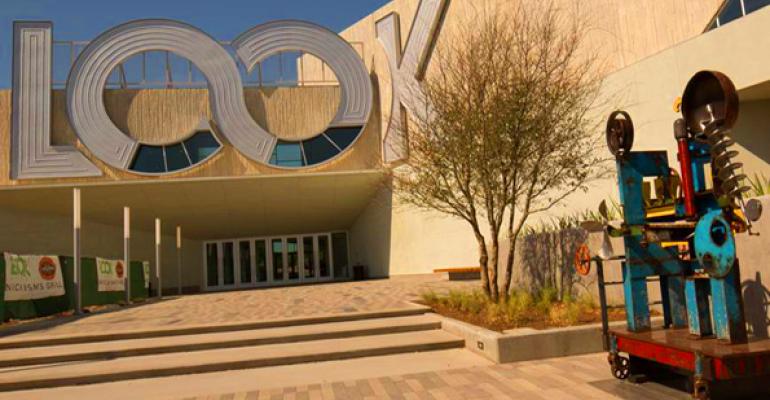 Entertainment Tenants Can’t Save All the Struggling Retail Centers

In the age of showrooming and multiple struggling big-box chains, retail landlords and managers have been increasingly looking at entertainment and restaurant tenants to take up spaces left over by large-format traditional retailers. The logic goes that while a Best Buy or a Barnes & Noble store may be taken out by Amazon, movie theaters and restaurants are more immune to online competition because they offer an experience that can’t be duplicated online.

Speaking about the future of power centers, for example, R.J. Hottovy, a retail analyst with Chicago-based research firm Morningstar, notes that “there will be a lot more non-traditional tenants—restaurants, lifestyle brands, entertainment concepts. [Tenants] that don’t necessarily have pressure from online retailers: you are looking for somebody who has that natural protection.”

Brokers at firms ranging from Jones Lang LaSalle to Cushman & Wakefield to SRS Real Estate Partners point to concepts like Studio Movie Grill, a dine-in movie theater that takes up approximately 45,000 sq. ft. of space, as a viable replacement for many large-format tenants. There is also LOOK Cinemas, out of Dallas, which opened its first location at Prestonwood Creek in Texas in March. LOOK Cinemas combines an 11-screen movie theater with a restaurant and a wine bar.

The Alamo Drafthouse, a similar venue, now operates at least six locations in Texas, while AMC has eight dine-in theaters around the country offering a premium theater-restaurant experience. Offering that kind of premium experience can help serve as an added draw to get people to see movies on the big screen instead of at home.

The movie theater sector has experienced some competitions from online players like Netflix and iTunes, but the impact has been more limited in comparison to the fallout for retail chains in categories like books, office supplies and electronics. Last year, the U.S. box office totaled more than $10.9 billion, according to Box Office Mojo, representing an increase from $10.1 billion in 2011. And while ticket sales plunged to a 16-year low in 2011, at 1.29 billion, they rose 5.6 percent in 2012, to approximately 1.36 billion.

But landlords shouldn’t count on miracles—today, movie theaters are not expanding rapidly enough to fill holes in every struggling center and they are not likely to go into centers that are on a death spiral either. At best, they can make a mediocre property stronger and a good property great.

“I think there continues to be expansion in the category, but it’s not as much as it was,” says Greg Silvers, COO of EPR Properties, a Kansas City, Mo.-based specialty REIT that invests in and develops megaplex theaters and entertainment retail centers. “We really are not seeing as much screen growth—we are seeing older theaters [torn] down and newer theaters come in. We think there is annual growth in new product, but that becomes kind of a net number.”

As of 2011, the most recent year for which data is available, there were 38,974 indoor movie screens in the U.S., and 5,331 indoor cinema sites, according to the National Association of Theatre Owners. The number of indoor cinema sites has been gradually decreasing since 1999, when there were 7,031 of those sites in the U.S., in part due to the emergence of multi-screen movie theaters. In 1999, there were 36,448 indoor movie screens nationwide.

Good tenants are hard to get

It’s easy to understand why retail landlords might want to bring more movie theaters to their centers. The theaters don’t just have the ability to take large chunks of space—they serve as true traffic drivers, according to Larry Rose, a consultant with DJM Realty, a Gordon Brothers Group company offering consulting and advisory services.

“The movies are recession-proof. It’s a relatively inexpensive form of entertainment and the other nice thing for landlords is that more often than not, you are not just going to the movies you are going to the restaurant before or after,” Rose says. “So it allows the landlord to increase the customers’ stay at their location.”

Plus, movie theater operators might not be as averse to opening locations in smaller markets as some retail chains, Rose adds. Depending on the operator, they may be looking to open new theaters in secondary and tertiary markets where theirs would be the only theater in town.

That being said, movie theaters also come with very specific site requirements that may be difficult for a landlord to satisfy, according to Silvers. In suburban areas, they normally require a three-mile “film free” zone—meaning that they can’t open within a three-mile radius of another theater in an effort to avoid competition. Their parking requirements are based on the number of theater seats and are therefore much greater than the parking needs of a regular retailer. And it’s often too much of a challenge for a movie theater operator to refurbish a vacant big-box space because the ceilings tend to be too low, the columns too many and the bathrooms too few. While movie theater operators remain open to replacing traditional tenants, they normally prefer to build from the ground up or renovate an existing theater space, Silvers says.

Ultimately, the decision comes down to demographics. If the retail center is in the right trade area, offers good access and plenty of parking and already has restaurants on site, helping drive customer traffic, multiple movie theater operators might be interested in moving in, according to Silvers.

If the center is struggling and desperately needs a movie theater to fill an empty space, it might be a challenge and the landlord would have to offer plentiful discounts to make the deal work.