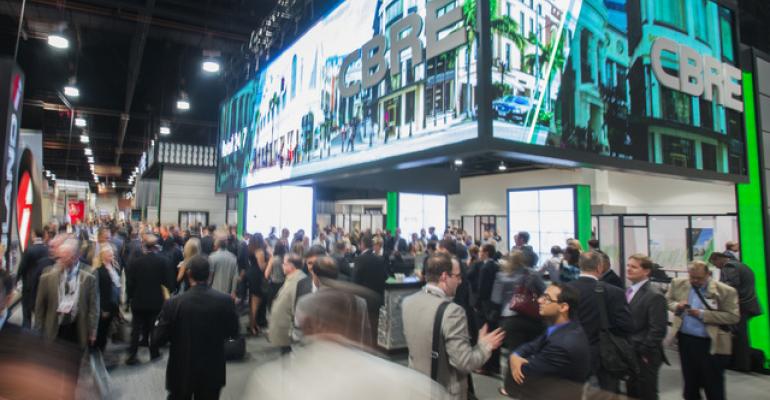 If you are heading to Vegas at the end of this week, expect a busy show, as ICSC reports that registrations this year are already up by about 1,000 compared to 2014, with approximately 33,500 people, and possibly more, attending the annual retail real estate convention.

“I think, from an activity standpoint, we are going to see the busiest show that we’ve had since the recession,” says Jesse Tron, a spokesman for ICSC. “Each year we’ve seen the numbers going slightly up, slightly up in terms of attendees and activity. This year, people are booking basically every half hour and their calendars are full. It’s going to be a beehive of activity.”

The representatives from commercial real estate services firm Colliers International have 800 meetings booked from Monday through Wednesday, and that doesn’t take into account off-site meetings this weekend, notes Anjee Solanki, the firm's national director of retail services. Colliers has expanded its show booth by 25 percent this year in anticipation of increased activity, Solanki adds.

This year, commercial real estate services firm JLL will also send its largest ever delegation to RECon, with more than 300 people, notes Naveen Jaggi, president of retail brokerage with the firm. And Solomon Poretsky, vice president of organization development with brokerage firm Sperry Van Ness, says that his team has been running out of RECon badges earlier than in recent years.

“Our firm’s attendance is up, and I expect that we will see that conference-wide,” Poretsky notes.

And people should also add to the official tally all of the real estate professionals who will be in Las Vegas to do business this coming week, but have not registered with ICSC and will be taking meetings off-site, adds Jaggi.

ICSC changed the show’s format this year to be more in line with pre-recession scheduling, with the Marketplace and the Leasing Mall open from Monday through Wednesday, but closed on Sunday. Instead, Sunday will be devoted mostly to educational programs, according to Tron, an arrangement the attendees NREI interviewed seemed happy with. Not having to stay in their booth on Sunday allows people to attend more industry functions and connect with more business associates one-on-one, they noted.

“The Sunday start has never been attractive,” says Jaggi. “You’ll see more people coming in on Sunday and staying until Tuesday, as opposed to the last few years, when many people left on Monday. This is a far better program in terms of getting people to stay.”

So what will people be talking about in all those meetings? Well, the recent Cushman & Wakefield deal with DTZ will definitely be a hot topic of discussion. “That’s a big disruption in the industry,” notes Jaggi.

This year, attendees feel highly optimistic about retailers’ upcoming store opening plans, expecting many meetings to result in new leases down the road. In addition to the general improvement in the economy, many retail chains have learned how to use the omni-channel sales model to their advantage, rather than looking at online sales as an adversity. “You are seeing e-commerce retailers come to [RECon] to look at opportunities in bricks-and-mortar,” says Solanki. What’s even more promising, the leasing activity will probably expand from the core markets into secondary and tertiary areas, predict both Poretsky and Jaggi.

Investment sales will also continue to be on many companies’ agendas, in spite of some people’s concerns last year that the industry may be facing a bubble. So far, however, low interest rates and improving property fundamentals have supported the high valuations, experts say.

“The fact is there are a lot of folks out there who have a large checkbook, so there will be a lot of interest on the acquisition side. You’ll also see people taking advantage of the market to sell assets to meet their strategic objectives,” says Dave Collins, executive vice president of portfolio management with InvenTrust Properties, a self-managed diversified REIT.

“Interest rates are still very, very low; the underwriting discipline is still very good, so I think the people who are buying assets today are buying them smart,” Collins adds. “Are they expensive? Yes. But I don’t think it portends the next bubble. Interest rates are so low that people can buy at an aggressive price and it still makes sense.”

But perhaps the biggest sign that the retail real estate industry is coming back to full health is the expectation of an uptick in new development projects showcased at the conference as well as more meetings about new construction. There are likely to be more projects presented at this year's RECon than there have been at the past seven conventions, predicts Jaggi, though most of those projects won’t be delivered until 2016-2017.

According to Poretsky, “There is no question we will see more development. I think that when you look at markets across the country, new supply has been gradually swallowed up. We are very bullish on anchored centers, we expect demand for that to be coming up. And it’s not just concentrated in coastal markets. We are tracking them in Tampa, Fla., in Orange County. We think we will hear about new developments coming out.”