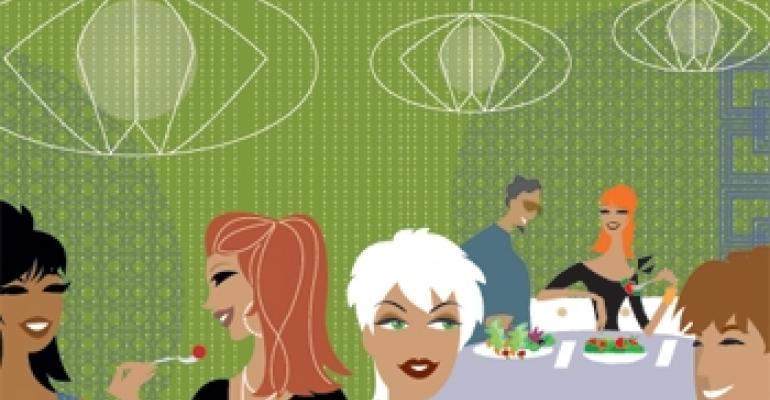 The economic troubles of the past few years may have put a damper on consumer spending, but industry observers say that through it all, shoppers appear to have maintained a healthy appetite for dining out. Now, with the economy showing signs of recovery, new concepts for restaurants are emerging. Local and regional chains are vying to squeeze in among the national contenders, appealing to developers who want to snag diners with a diverse menu of distinct and flavorful options.

Overall, the U.S. restaurant industry added 2,600 new eating and drinking locations in 2009, according to a report from the National Restaurant Association (NRA), citing data from the U.S. Bureau of Labor Statistics. That’s well off the pace of 11,000 new locations per year averaged between 2002 and 2008, but given the depth of the recession, the growth was viewed as a positive sign.

The stakes are high for landlords—they know that a shopper who eats at the mall is likely to stay longer and spend more. “We look at the clusters of restaurants at our centers as becoming another anchor,” says Guy Mercurio, a vice president who oversees restaurant leasing for Santa Monica, Calif.-based regional mall REIT Macerich Co. “The number of people that they bring in by combining several concepts can equal the number of people that go into a department store.”

Shoppers can spend up to 40 percent longer at a property if they eat there, according to one study Mercurio cites. In addition, he says, a slate of restaurants can draw upwards of 2 million diners a year, many of whom might not have visited the mall otherwise.

“We’re essentially trying to stretch the shopping day and the shopping hours,” he says. With the right restaurants, “we believe we will draw more people from a greater distance, and they’ll stay longer at our center.”

Over time, landlords and restaurateurs have changed their thinking about what kinds of restaurants will accomplish that goal. They now emphasize that today’s diners are looking for unique, lively experiences. Customers who once sought out reliability and consistency now desire authenticity, says Rob Wilder, co-founder of Washington, D.C.-based restaurant operator ThinkFoodGroup.

“The big trend over time has been that restaurants are entertainment,” says Wilder, a business partner of Washington–based Spanish chef José Andrés. “They’re social. Families get to sit down with their kids and focus. There aren’t those demands you have around the kitchen table.”

In keeping with that trend, observers say, restaurateurs increasingly aspire to create a fun and casual atmosphere. They’re shying away from excessive formality and adding a wider array of entrees at varying price points, including kids’ menus at restaurants that previously overlooked younger diners. Some expanding chains even introduce movies, live music, games or bowling into the dining experience.

These developments come as restaurateurs show growing optimism about their prospects in coming years. An NRA survey in September found that 43 percent of operators expected higher sales over the next six months compared to the same period the previous year. Meanwhile, 38 percent anticipated an improving economic outlook over the next six months, up from 25 percent in August. They also reported rising customer traffic, and net same-store sales rose for the first time in six months. In addition, the NRA’s Restaurant Performance Index stood at 100.3 in its October reading. Anything above 100 signifies expansion in the index of key industry indicators.

Eating out, but eating less

Compared to retailers, observers say, restaurants weathered the recession relatively well—though not all equally. Customers continued to eat out but sought to save money by sharing portions or trading down to cheaper locations. That resulted in steeper declines in revenues at the highest-end restaurants, such as steakhouses, says Bryant Siragusa, professional director of mall restaurants and entertainment for Chattanooga, Tenn.-based regional mall REIT CBL & Associates Properties Inc. Companies taking employees out on expense accounts traded down to upscale casual locations, whose usual diners in turn traded down to casual dining. The lower-end restaurants saw less of that churn.

At restaurants at Macerich locations, “frequency and customer counts are fairly normal, almost where they’ve always been,” Mercurio says. Yet diners have been a bit more frugal, spending less by getting wine by the glass rather than buying full bottles, or by sharing salads or entrees.

To accommodate such thriftier diners, some restaurants began offering more specials, such as bundling courses together into fixed-price menus, says Mercurio. Customers have also cut back on their lunch budgets, so restaurants might switch up menus and present the midday crowd with a cheaper, fast-casual, but still somewhat upscale set of dishes. At night, the restaurant returns to full-service.

At CBL, the focus remains on long-term prospects. Many of the group’s leases with restaurateurs extend to 10- or 15-year terms, Siragusa says, meaning that the company must look beyond short-term economic hardships. “Trading down to cheaper options may be happening now, but it won’t always be that way,” he says. “Just because fast casual is popular, CBL isn’t going all fast casual.”

Landlords now signing deals face an increasingly varied array of options. With higher-end restaurants and national chains reining in aggressive expansion, local and regional players have seized opportunities to fill the void. That can prove to be an asset for a landlord seeking to distinguish a property with an up-and-coming hometown restaurateur who can bring novelty and buzz to the site.

Among national chains, Cheesecake Factory, for example, was once opening 20 locations a year, says Peter Haback, vice president of restaurant leasing for Chicago-based regional mall REIT General Growth Properties Inc. This year, they opened three. P.F. Chang’s was once expanding at a similar pace but it opened only six locations this year.

CBL’s Siragusa says that trend appears to be ending. “Most of the national chains have flipped the switch and have started looking to expand again,” he says. “I’ve also seen a big emergence of smaller chains that really have the ability to go national.”

So who are the expanding chains to watch? Leasing agents cite a number of up-and-comers. One is Bravo Brio Restaurant Group, a Columbus, Ohio-based chain that just went public with an October IPO. The company’s Bravo! Cucina Italiana and Brio Tuscan Grille brands are likely to be in high demand, says Siragusa.

Siragusa also points to Cheddar’s, a Texas-based chain akin to T.G.I. Friday’s, Applebee’s and Ruby Tuesday; and to BJ’s Restaurant and Brewhouse, a California-based company that sells its own custom brews. Likewise, Cooper’s Hawk, a Chicago-area chain that makes wine on site, may be seeking to expand. The eatery just won a Hot Concept award from Nation’s Restaurant News.

Diners and developers know Florida’s Darden Restaurants for its widespread brands such as Olive Garden, Red Lobster and LongHorn Steakhouse. Darden is now building out with Seasons 52, a premium casual American grill with a seasonal menu.

In addition, it’s doing its best to keep its more mature concepts as fresh as possible. The firm recently announced a plan to remodel all of its nearly 700 Red Lobster locations in a style reminiscent of the seaside village of Bar Harbor, Maine, while introducing new menu items in the $8.99 to $18.50 price range. Thirty-three percent of restaurants will be remodeled by June 2011, with the goal of all Red Lobster restaurants receiving a remodel by 2014.

Macerich’s new Santa Monica Place in Santa Monica, Calif., will feature a True Food Kitchen, a growing chain that Macerich’s Mercurio expects to be popular. The restaurants sprang from a partnership between noted health guru Dr. Andrew Weil and Fox Restaurant Concepts, a Phoenix-based company. You might expect hippie grub such as “tofu and cabbage,” as Mercurio says, but True Food instead presents healthy organic food, juices and smoothies, as well as wine, beer and specialty cocktails.

Entertainment-themed establishments form a subcategory of their own. Looking for bowling? There’s Lucky Strike and Ten Pin Alley. Toby Keith’s I Love This Bar and Grill brings live music into the mix, and AMC has been opening dine-in movie theaters. Chuck E. Cheese, long popular among kids, continued to expand and even reap positive revenues during the recession, says CBL’s Siragusa.

Kasal also likes working with restaurants that use social media and Web marketing tools such as Twitter, Facebook and Groupon. Such efforts demonstrate that the restaurateurs care about improving their offerings and responding to feedback from customers. “Those are the ones we’d like to be associated with,” Kasal says.

The array of expanding national chains, along with the local and regional restaurants seeking to grow, gives landlords a mix of choices. They now consider not just whether their restaurants are local, regional or national, but also the range of cuisines represented and how the restaurants will complement their surrounding retailers.

“The goal is to provide something in each category,” says Gar Herring, president of MGHerring Group, a Dallas-based developer. MGHerring recently added six restaurants to its Village at Fairview in the Dallas area, and three more will move in by the end of the year. Some are regional, others national, and the cuisines include Asian, Tex-Mex, Italian, seafood, burgers and baked goods.

By selecting these restaurants, MGHerring sought to offer enough variety that shoppers wouldn’t have to decide on what they wanted to eat before they arrived at the center. For those doing a little more advance planning, such as scheduling an event, Fairview also employs a dedicated restaurant concierge to field questions and requests.

For its part, Macerich doesn’t follow set formulas when balancing local, regional and national tenants, says Mercurio. But having all of them is key. “You appeal to a wider range of customers, and it becomes more of a destinational draw,” he says.

It’s an approach that has worked well for Macerich, Mercurio says, and it informed the buildout at Santa Monica Place, a refurbished center that the company opened Aug. 6. The site boasts regional and local restaurants, a food court with about a dozen options, and a market featuring local vendors of artisanal meats, wines, seafood, coffee, baked goods and other foodstuffs.

The assortment of upscale offerings sounds like a foodie’s dream, and indeed, one restaurateur says developers will need to up their game to get the attention of choosy diners. “People are somewhat jaded and really want to seek out something unique,” says ThinkFoodGroup’s Wilder.

For malls to remain competitive, Wilder says, they’ll need to become financial partners, which could mean spending up to $10 million to help a signature restaurant get built. Restaurants are a high capital business, fueled in part by the regulation and construction demands that restaurateurs must contend with. Diners “want somebody who’s going to push the limits a little bit, and that’s never going to be an old-fashioned mall deal.”

Wilder and Andrés, his business partner, have talked with developers but have yet to find the kinds of deals they’re looking for, he says. It’s too early to tell whether developers will change their minds, but ThinkFoodGroup isn’t ready to compromise.

“The hotel world has gotten with the program,” Wilder says. “They’re willing to build a restaurant and turn the key for us. And if you want us, you’ll have to do that.”