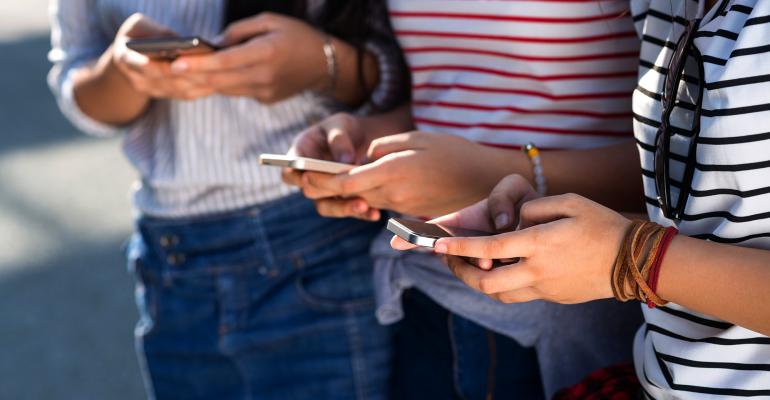 Investors have always been interested in young consumers and how their habits might open up new opportunities, but much of the long-held thinking on college kids and tweens—invest in beer stocks or TV networks or junk food—don’t hold up today.

This is the year that Generation Z becomes the biggest consumer cohort globally, displacing millennials as a top obsession for investors trying to figure out how to cash in on their unique shopping, eating and media habits. While they might still be in school, they have spending power to the tune of $143 billion in the U.S. alone, leaving fund managers salivating at the chance to harvest some of that potential alpha.

“Gen Z has their finger on the pulse on the companies that speak to them, that they think are going to grow with them,” said Phil Bak, CEO of Exponential ETFs. “Therefore they’re probably better suited to pick those investments than some of the more seasoned financial professionals.”

Investors have always been interested in young consumers and how their habits might open up new opportunities, but much of the long-held thinking on college kids and tweens—invest in beer stocks or TV networks or junk food—don’t hold up today. Gen Z, roughly between the ages of seven and 22, were born after the internet went mainstream and occupy a world where marijuana is going legal. Anything and everything can be delivered to their front door with a swipe of a finger and they grew up on platforms like Snapchat and Instagram, where the influencer culture has taken hold.

For investors looking to factor Gen Z into their portfolios, here are some broad trends they may want to consider:

1. They Can Be Influenced

While older millennials graduated college before the rise of Facebook, or even mobile phones, these new consumers live on Instagram and other platforms. In fact, 52 percent said they primarily find out about new products from social media, a jump of 10 percentage points from millennials and double the rate for their Gen X parents, according to a recent survey by Bloomberg News and Morning Consult.

That means influencers—celebrities or everyday people with big social media followings who are paid to promote products—can have an outsized impact with this cohort where nearly six out of 10 self-diagnose spending too much time on their phones.

Take for instance Kylie Jenner, 21, who promoted her makeup line on Instagram and is now considered the youngest self-made billionaire. Her makeup line made its way over to Ulta Beauty Inc. last year and the company’s shares are up more than 40 percent in 2019. She’s so influential, one tweet from her in February 2018 disparaging Snapchat wiped out $1.3 billion in market cap.

Bloomberg recently constructed a hypothetical stock portfolio called The Influencer Economy ETF, or ticker GENZ. The fund is up about 15 percent since the start of 2018, outpacing the gain in the S&P 500 Index over the same period.  GENZ’s holdings are weighted based on the rank of their associated influencer, per Forbes.com, which incorporates social media followers and rankings from other agencies. The top holdings include Electronic Arts Inc., Nike Inc., Adidas AG, Coca-Cola Co., T-Mobile US Inc. and Under Armour Inc. based off of partnerships with influencers such as Cristiano Ronaldo, Selena Gomez, Ariana Grande and Dwayne “The Rock” Johnson.

2. They Have Different Vices

Younger consumers are wary of nasty hangovers and eager to wake up on the weekends feeling fresh so they can get outdoors and capture selfies. Beer in particular is going through a slump as Americans cut back on alcohol. That’s bad news for Anheuser-Busch InBev SA and Molson Coors Brewing Co., which make the mass-market brands like Bud Light and Coors Light that are getting hit the hardest.

Marijuana, meanwhile, is going mainstream. It’s perceived as healthier than alcohol by many Gen Z consumers and is now legal for adult use in 10 U.S. states. Gen Z consumers are coming of age in time when the decades of stigma around weed—think reefer madness—are fading away as more states legalize and stressed out, tired Americans look to cannabis compounds to alleviate insomnia and anxiety, or just unwind after a hard week of work.

Investors have two main options for betting on weed. They can invest in Canadian companies—think Canopy Growth Corp. and Aurora Cannabis Inc.—which benefit from federal legislation there but also are operating in a country with a population smaller than California.  There are also the so-called multi-state operators in the U.S., like Curaleaf Holdings Inc. and Green Thumb Industries Inc. The U.S. legal market is already larger than all of Canada’s, but federal prohibition creates hurdles for the American companies—and leaves some money managers wary of advertising their bets.

3. They Don’t Have to Go to Stores

Gen Z could be the first generation to truly embrace online grocery shopping—though maybe not yet. Just 83 percent of them said they primarily purchase groceries at a physical store, compared to 95 percent of baby boomers and 87 percent of millennials. Surveys have also indicated that Amazon is one of the favorite brands of Gen Z consumers, who’ve never lived in a time without the e-commerce giant.

It’s worth noting that the oldest members of Gen Z are barely out of college by most measures, not exactly peak grocery-buying age. Still, they’ve grown up in a world where digital shopping is ubiquitous. As of now, a tiny percentage of groceries are purchased online, because most people still want to touch their tomatoes. But since Amazon.com Inc. announced a deal to buy Whole Foods almost two years ago, Kroger and Walmart, the largest sellers of groceries in the U.S., have spent billions investing in technology and keeping prices low as they brace for the digital invasion. Whoever figures out the equation for grocery delivery—human-delivered or self-driving cars—will have a lot to gain.

4. They Choose Their Brand Loyalties Carefully

The rise of Gen Z could be bad news for traditional clothing retailers like Gap Inc. and Macy’s Inc., already battered by the shift to buying clothing online. The next generation is also embracing second-hand apparel, which will be bigger than fast fashion within the decade, according to Thredup’s 2019 Resale Report. Thredup, fashion resale website, says more than one in three Gen Z shoppers will buy used clothing this year, versus less than one in five boomers or Gen X consumers. That seems to stem, in part, from the generation’s interest in environmental issues and ethical shopping.

Apparel brands looking to connect with younger shoppers have tried embracing edgier brand ambassadors, a departure from the days when consumer companies went to great pains to avoid politics. That's because Gen Z actually wants corporations to take a stand on issues, with 40 percent saying they’d pay more for a product if they knew the company was promoting gender equality issues and 42 percent for racial justice initiatives.

Nike understands. Last year, it released an ad featuring Colin Kaepernick, and while the inclusion of the controversial quarterback-turned-activist initially spooked investors, the shares have since rebounded. And there are indications that ads have helped boost sales.

“A lot of times in this industry people want to overcomplicate the process of picking stocks,” Exponential ETFs’ Bak said. “We think that there’s a pretty high correlation between companies that from your personal experiences you think are good and high-growth companies.”

Gen Z consumers are more likely to skip meat than the older U.S. cohorts, the latest dining disruption with big implications for fast-food restaurants and packaged-food giants. Burger King this week announced a test of a plant-based Impossible Whopper, another sign that even the purveyors of indulgent onion rings and big burgers see a shift ahead.

Just a few years ago, the narrative was that millennials were killing off traditional fast-food chains, opting instead for the so-called fast casual competitors like Chipotle Mexican Grill Inc. and Panera Bread that were promising higher quality and cleaner ingredients with the same quick convenience. It’s true that eating habits have shifted, but old-school burger chains like McDonald’s Corp. and Burger King still dominate in the restaurant industry. McDonald’s has bounced back from a sales slump, thanks in large part of all-day breakfast, and recently invested $300 million in a technology company it says will help boost drive-thru sales. It turns out even today’s teens still want fries with that.

It’s more Big Food that's feeling the pain. Large packaged-food makers like Kraft Heinz Co. and Campbell Soup Co. have been battered in recent years by the shift away from traditional brands that dominated grocery stores for decades. They’ve tried to reshape their portfolios, but have struggled to resonate with younger consumers.

So what does this all mean for savvy investors trying to tap into Gen Z’s buying habits? People in generational cohorts are never as uniform as marketers would like, and with the youngest still in elementary school, there's still some time before the preferences of the wider generation shake out. But for some forward looking investors, now’s the time to start thinking about how to structure a portfolio for a post-boomer economy.

“Gen Z are likely still on the younger end to consider investing in their consumption patterns,” said Jay Jacobs, head of research and strategy at Global X, which created a millennial-tracking ETF called MILN. But “the millennial demographic tells us that there can be clear and obvious differences in the ways that certain generations spend their money. As Gen Z eventually enters their prime earning years, some of these trends could start to become more concrete and visible.”