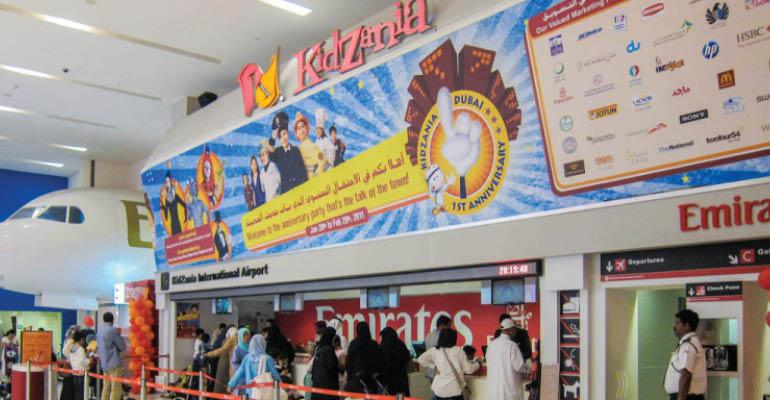 KidZania can sop up square footage vacated by department stores and has the added bonus of being immune to e-commerce.

(Bloomberg)—Sandeep Mathrani, head of U.S. shopping-center operator General Growth Properties Inc., was in Dubai when he saw something that startled him: an indoor city just for kids.

In the middle of the giant Dubai Mall, he found an activity center filled with child-sized restaurants, bakeries, hospitals and police stations. The kids operated their own role-playing town -- complete with currency -- and parents were nowhere to be found.

Mathrani took to the concept, called KidZania, and is now working with the company to bring it to America. E2W, owner of the KidZania U.S. license, plans to open the first activity centers at GGP properties in Dallas and Chicago over the next two years, marking the U.S. debut of a business that has staked out locations in 24 cities overseas.

At a time when U.S. malls are facing hundreds of store closings, they’re looking to fill their space with more diverse tenants -- everything from urgent-care centers and supermarkets to climbing gyms. KidZania can sop up square footage vacated by department stores and has the added bonus of being immune to e-commerce.

“The country is over-retailed,” Mathrani said in an interview. “The biggest advantage we can have is to recapture department stores and repurpose them.”

GGP, which owns 126 retail centers in 40 states, has gone on the offensive in converting department stores into other facilities. Instead of just waiting for stores to go vacant, it has bought out leases and physical property from chains like Macy’s Inc., Sears Holdings Corp. and J.C. Penney Co. The company has now reclaimed more than 100 stores over the past five years, Mathrani said.

Mathrani already knew the concept when Rubenstein approached him last year, once E2W had secured a license to operate in the U.S., Rubenstein said.

“That was a big, big, big win,” Rubenstein said. Mathrani “was ready in advance, and it just so happened we had the right product to fill those needs at his centers.”

For Mathrani, KidZania is part of a shift toward “experiential retail” -- and away from department stores. Over the past six years, GGP’s roster of department stores has dropped from 500 to 398. And the number could fall below 300 in the next five years if the company continues proactively acquiring stores, he said.

Other concepts have taken their place, including supermarkets like Wegmans Food Markets Inc., entertainment hub Dave & Busters Entertainment Inc., and a growing number of bowling alleys and fitness centers.

Each KidZania “city” allows children ages 4 to 14 to role-play in more than 100 occupations and professions, such as doctor, reporter or truck driver. The centers come with buildings, paved streets, cars and their own currency called “kidZos.” To make the experience as authentic as possible, companies sponsor local landmarks and businesses. Kids may fly a British Airways plane, for example, or operate an H&M store.

Parents are free to drop off their children for a session, which lasts about four to five hours, or they can stay to watch from a deck that looks over the scene. A session typically costs from $30 to $50 per child, depending on the location. KidZania has locations in cities such as Tokyo and London, and each one draws about half a million visitors annually, the company says.

The first U.S. locations will go into Dallas’s Stonebriar Centre in 2018 and Chicago’s Oakbrook Center in 2019. The Dallas location will be built from the ground up, while the one in Chicago will occupy the upper level of an existing Sears store. Rubenstein expects to roll out 20 more U.S. locations over the next decade.

The chain should have plenty of room to grow. The U.S. has about 24 square feet of retail real estate per capita, according to data compiled by Clarion, which has about $44 billion in real estate under management. By comparison, Canada has only 16 square feet per person.

More than 10 percent of the nation’s retail space -- or nearly 1 billion square feet -- may need to be closed, converted to other uses or renegotiated for lower rent in coming years, according to data provided to Bloomberg by CoStar Group. That means malls will need new anchors, said Jeffrey Langbaum, an analyst with Bloomberg Intelligence.

“The landlords want to bring some tenant into that space that will improve the overall quality of the mall and the traffic flow into the mall,” he said. “They’re setting about trying to find the nontraditional retailers to fill that space and accomplish what the department stores historically accomplished.”