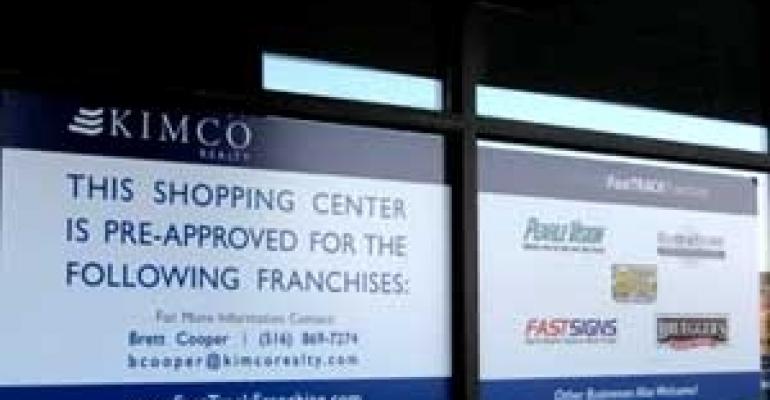 In an effort to streamline the connection between franchise operators, franchisees and its leasing personnel, shopping center REIT Kimco Realty Corp. launched FastTrack Franchise, a program aimed at alerting interested entrepreneurs to available, franchise-approved retail spaces within Kimco’s portfolio. At first, the program will cover 46 Kimco’s properties in the Mid-Atlantic and the Northeast. Eventually, the REIT plans to roll it out throughout its portfolio.

The idea came to Kimco’s Northeast leasing personnel after the firm saw strip centers owned by smaller landlords advertize available spaces to potential franchisees, according to Brett Cooper, leasing associate for the Northeast region with the firm. The strategy offers Kimco the boon of being able to alert potential tenants about a location before an existing tenant vacates the space.

“If we do have a space that’s coming back to us, we couldn’t hang up signage saying ‘For Lease’ because the current retailer is still operating for the next six months,” says Cooper. “But I can send an email to the franchisor saying ‘If you have an active franchisee in this market and this fits your criteria, this could be yours in six months.’ We are letting them know where our inventory of vacancy stands.”

Kimco started working on the program six months ago, studying expanding franchise concepts and their space criteria. Today, it already has agreements with 18 chains, including Anytime Fitness, Great Clips, Pearle Vision, UPS Store and Bruegger’s. In January, the firm launched a website that allows entrepreneurs to search for pre-approved spaces within its portfolio by either franchise brand or location. On Feb. 17, it started putting up signage on site at shopping centers, which will serve as the primary way to peak people’s interest, according to Cooper.

“Once we get everything set up, we think all the different components—the signage, the website, the marketing we are doing—is going to help get the word out there,” he says. “In itself, we never anticipated the website to attract that much attention.”

Once potential franchisees find a site they feel would work for them they can contact Cooper directly and have a letter of intent drafted contingent on their approval going through. After that, Cooper will forward their information to the franchise operator for further review.

From the franchise operators’ point of view, FastTrack creates an avenue for them to grow their portfolios using site selection criteria rather than franchisee preferences, according to Jim Runyon, vice president of franchise real estate in the Northeast with Anytime Fitness.

“Right now we are largely franchisee driven and this offered us an opportunity to be site-driven,” he says. “It’s another method of exposure.”

Anytime Fitness is searching for spaces ranging between 4,000 sq. ft. and 5,000 sq. ft., in class-A centers at “class-B rates,” according to Runyon. The chain particularly likes former Blockbuster and Hollywood Video stores.