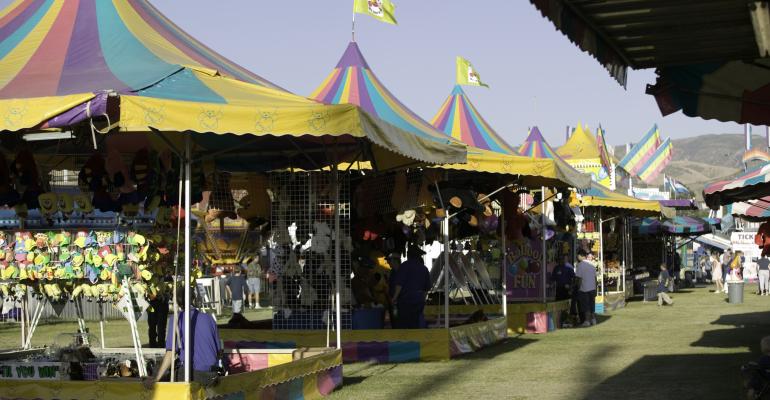 With customer traffic sagging, U.S. retail landlords are using their sprawling concrete lots to host events such as carnivals, concerts and food-truck festivals.

(Bloomberg) — Malls are fighting for shoppers with one thing their web rivals can’t offer: parking lots.

With customer traffic sagging, U.S. retail landlords are using their sprawling concrete lots to host events such as carnivals, concerts and food-truck festivals. They’re aiming to lure visitors with experiences that can’t be replicated online -- and then get them inside the properties to spend some money.

“Events draw people to come to the shopping center,” said Keith Herkimer, whose company, KevaWorks Inc., is working with big landlords including GGP Inc. and Simon Property Group Inc. to produce outdoor events. “They generate revenue for the owner and offer a chance for cross-promotion, so they can try and drive more customers into the stores.”

Mall owners across the country are grappling with record store closings and declining rents. Retail property values are down 3 percent in past six months, as all other types of commercial real estate showed gains, according to the Moody’s/Real Capital Analytics indexes. A Bloomberg gauge of publicly traded mall landlords has tumbled 15 percent in the past year, the worst performance among U.S. real estate investment trusts.

Amazon.com Inc. and other internet retailers continue to grow, while department stores including Sears Holdings Corp. and Macy’s Inc. have been closing hundreds of locations. Payless Inc., the discount shoe seller, is among the latest to announce a massive shuttering -- of 400 stores -- as part of a bankruptcy plan.

“We expect to see a trend of more closings,” said Carol Kemple, an analyst at Hilliard Lyons. “Most retailers, if they’re still standing in September, will probably try to make it through the holiday season.”

Retail landlords have already made a push toward experience-driven offerings by adding restaurants, movie theaters and activity centers for children. Many malls are also adding rotating stores around for only a short time -- known as pop-up shops -- that are meant to attract young customers who see shopping as an event.

Now, events are reaching beyond the malls themselves. Herkimer’s task is to bring crowds to parking lots with events that generate as much as $60,000 a week for mall owners from the largest outdoor events.

The idea is gaining traction. Next month, Simon Property is having the first carnival in its Round Rock Premium Outlets parking lot, about 20 miles (32 kilometers) north of Austin, Texas. Similar events are being held for the first time at locations such as Central Mall in Port Arthur, Texas, managed by Jones Lang LaSalle Inc., and a Cheyenne, Wyoming, mall owned by CBL & Associates Properties Inc. In July, Simon Property’s Orland Square Mall, southwest of Chicago, will be holding its first parking-lot food-truck festival, with plans for live music performances, Herkimer said.

Lisa Harper, senior director of specialty leasing for Chattanooga, Tennessee-based CBL, said the company has expanded its carnival business at many of its 87 properties over the last couple years. She and Herkimer have discussed the possibility of pumpkin patches in the fall months and adding movie nights to some properties. CBL’s Triangle Town Center, in Raleigh, North Carolina, is about to start its second mini concert and food-truck series, called Creekside Wind Down, Harper said.

Retailers rent the outdoor space in a structure that resembles their indoor leases, Harper said. While each deal varies, the agreements involve a base rent fee for the use of the space and a percentage payment after the event reaches a certain threshold. Department stores, which sometimes own or control their parking lots, are seeing more value in renting the space after many years of restricting their use, she said.

There’s no guarantee, of course, that people will go inside, said Tracey Hatley, director of specialty leasing for JLL Retail. But the events offer opportunities for cross-promotion. Customers receive fliers advertising stores or restaurants inside the mall or coupon books to help draw them in.

That works well for properties like the Santa Rosa Mall in Mary Esther, Florida, Hatley said.

“They are a property that’s struggling with occupancy, struggling with driving traffic to the center, so they love doing parking-lot events,” she said. “You can see it from the road and it gets people on the property.”

Some malls are doing fine even without renting out their outdoor space, especially higher quality properties with upscale stores. They have been drawing visitors with grocery stores, medical offices and high-end restaurants -- all businesses that face less risk from e-commerce competition than traditional tenants. Some retail REITs are adding office space or apartments to their portfolios to diversify.

Sandeep Mathrani, chief executive officer of GGP, said at a conference this month that the perfect mall now would include one department store, a supermarket, an Apple store, a Tesla store and businesses that started out online, like Warby Parker, the purveyor of prescription eyeglasses and sunglasses. Clothing stores now represent about 50 percent of the average shopping center, down from about 70 percent, he said.

“Landlords are trying to give people reasons to come to the mall, whether it’s a Tesla charging station or getting local car clubs to host events in their parking lots,” said Alexander Goldfarb, an analyst at Sandler O’Neill & Partners LP. “It’s not a fun time to be either a retailer or landlord, but it doesn’t mean every single mall or shopping center is going to close. Far from it.”

And for some retailer landlords with better-performing properties, the industry’s turmoil could mean more opportunity.

“This very painful process will surely take more than five years,” Steven Roth, Vornado Realty Trust’s chief executive officer, said in a letter to shareholders this month. “It will also create enormous opportunity for those with the capital and management platforms to feed on the carnage.”

Urban Edge Properties, a Vornado spinoff, is one landlord adding to its holdings. The company is under contract to buy seven retail properties, with 1.5 million square feet (140,000 square meters) of gross leasable space, mostly in the New York City area.

Until malls can figure out how to bring in steady crowds, expect to see corn dogs and carousels in their parking lots, Herkimer said.

“If retail turned around and vacancy rates dropped again, and all the sudden these malls and shopping centers are full of tenants, I think there’d be a circle in the other direction,” he said. “They’d say, ‘We need the parking space for customers.’”