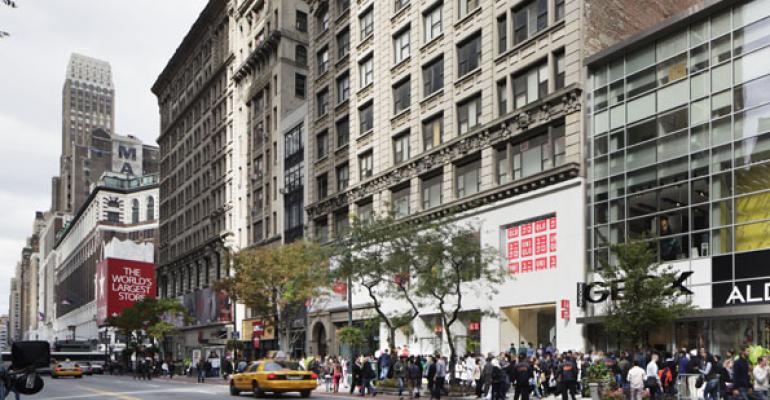 Manhattan Landlords Are Turning to Giveaways for Retailers

Tenant-improvement allowances haven&rsquo;t been typical in the Manhattan retail market. But now the concessions, which can pay for anything from lighting and displays to a complete overhaul, are becoming a key component in some new leases.

(Bloomberg)—Manhattan landlords, who have seen retail occupancy plummet after boosting rents to record levels, are trying to avoid big price cuts. Instead, they’re writing checks for things like interior redesigns and moving expenses to keep storefronts from going empty.

Tenant-improvement allowances haven’t been typical in the Manhattan retail market. But now the concessions, which can pay for anything from lighting and displays to a complete overhaul, are becoming a key component in some new leases, particularly for large, flagship stores in high-profile areas, such as Madison Avenue and Fifth Avenue, according to Steve Soutendijk, an executive director at brokerage Cushman & Wakefield Inc.

“We’re seeing tenant-improvement and concession packages that retail landlords never, ever contemplated before,” he said.

The sweeteners signal that the balance of power is tilting toward merchants in Manhattan after a relentless surge in rents during the past five years. Landlords facing rising vacancies are more willing to negotiate with retailers, who have gotten battered by the rapid rise of e-commerce and have shied away from committing to costly, long-term leases.

The incentives are “a creative solution that landlords are using now to get deals done,” said Jeffrey Roseman, an executive vice president at Newmark Grubb Knight Frank Retail. “It’s a way to get over the hump.”

The details of leases in Manhattan are often closely guarded secrets, making it difficult to quantify the incentives retailers are receiving. Landlords have a lot of ways to cut a deal without lowering asking rents, such as paying the construction contractor, offering an extended period of free rent or simply writing a check for the tenant to use at their discretion.

Property owners are kicking in as it becomes more expensive to build out stores. Companies are creating elaborate installations, such as the basketball court where customers can try out their sneakers in Nike Inc.’s 55,000-square-foot (5,100-square-meter) Soho store, in an effort to create an experience that shoppers can’t get online. Sportswear maker Under Armour Inc. plans to open what Chief Executive Officer  Kevin Plank has called “the single greatest retail store in the world” at its new Fifth Avenue home, formerly occupied by FAO Schwarz.

In the city’s largest retail lease of 2016, Nike in December signed a 15-year agreement to rent 69,214 square feet across seven floors at 650 Fifth Ave. in Midtown. Landlords SL Green Realty Corp. and Jeff Sutton had been working to fill the space since acquiring the property in 2013. They bought out the leases of Devon & Blakely and Godiva and committed to adding three additional floors and rerouting the storefront’s entrance, according to a presentation in December for SL Green’s investors.

“That deal did not come easy by any stretch,” Andrew Mathias, president of SL Green, said while discussing the Nike lease at the investor conference.

As part of Nike’s deal at 650 Fifth Ave., the landlords offered to take over the company’s lease obligation at an existing store about five blocks away and adjacent to Trump Tower, according to a person with knowledge of the transaction who asked not to be named because the terms are private.

The landlords haven’t disclosed the breakdown of rental rates and costs associated with the $700 million Nike deal. In its presentation, SL Green forecast a 7.75 percent return on the investment.

Representatives of SL Green, Sutton and Nike declined to comment.

At 680 Madison Ave., fashion designer Tom Ford signed a lease in August for 12,300 square feet, taking over the space after a Qatari luxury retailer backed out of a deal. As an enticement, landlord Thor Equities gave Ford about $12 million in an improvement allowance, a person with knowledge of the transaction said. A representative for Thor declined to comment on the deal.

Merchants in Manhattan are gaining more leverage in negotiations after landlords pushed leasing costs to record highs. As the U.S. emerged from the recession and overseas tourism in New York boomed, rents on Fifth Avenue from 49th to 60th streets -- the world’s most expensive stretch of retail real estate -- jumped about 50 percent in the past five years, according to Cushman. The growth drew property investors.

Tepid demand for luxury goods and a stronger U.S. dollar that’s crimped spending by tourists have particularly hurt Fifth Avenue, where the space-availability rate was at a record 15.9 percent in fourth quarter, up from 10.1 percent a year earlier, Cushman data show. The average rent on the stretch from 49th to 60th streets reached a record $3,213 a square foot in the third quarter before dropping in the last three months of the year to $2,985.

Some landlords will grant generous tenant-improvement allowances rather than slash rents in order to maintain a property’s value, said Susan Kurland, an executive vice president of retail services at brokerage Savills Studley Inc. That trend has accelerated over the past 12 months in prime locations in Manhattan, she said.

Upscale retail corridors outside of Manhattan are faring better, according to Naveen Jaggi, president of the retail brokerage at Jones Lang LaSalle Inc. Rents along Chicago’s Michigan Avenue and Rodeo Drive in Beverly Hills, California, are still on the upswing, and vacancies aren’t as prevalent, he said. Retailers had disproportionately large footprints in New York, which means they have more extra space to give back as they contract, Jaggi said.

“If you went to New York, you went big,” he said. “Big is not always great today.”

Outside of urban centers, owners of lower-tier malls are spending more cash up front to avoid vacancies and accommodate restaurants and entertainment venues, which are costly to build and are replacing many traditional retailers hurt by online shopping, Green Street said in report this month.

The firm has estimated that several hundred malls around the country will cease operations over the next decade.

The rise in costs for retail landlords mirrors trends in other corners of the commercial-property market. Manhattan office landlords, facing falling rents and heightened competition, took on a record 12 percent of the expense of converting raw space last year, according to Savills Studley. Apartment landlords are offering concessions and paying broker’s fees -- a burden typically shouldered by the tenant in New York -- to better compete as a glut of new towers gives renters more choices.

“People bought assets predicated on achieving incredible rents and were unable to deliver,” Goldfarb said. “One of the oldest tricks in real estate is to maintain high face rents by funding a lot of incentives up front.”