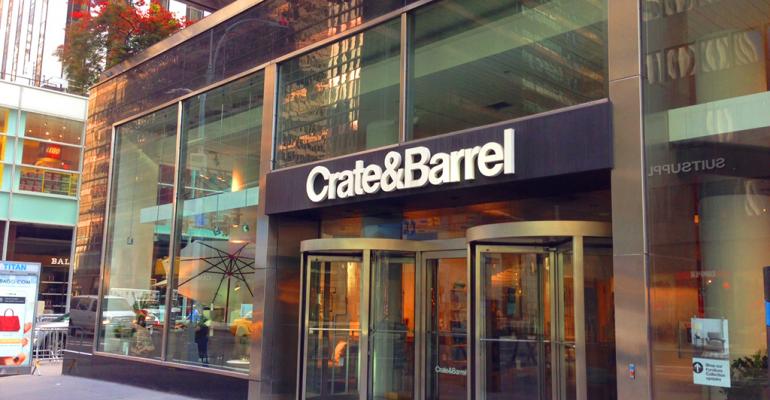 Rents in Manhattan’s famous shopping districts are among the priciest in the world—so pricey, in fact, that many retailers and restaurants have been forced to abandon them in favor of less expensive locales.

Crate and Barrel, for example, is shuttering its flagship location at 650 Madison Ave., five years before its lease expires. According to numerous reports, the privately-held chain already pays $20 million for the 62,000-sq.-ft. store, which it has occupied for roughly 20 years. The home furnishings retailer will continue to operate its Soho location, according to a statement from the company.

Likewise, Toys “R” Us plans to close its iconic Times Square location. The Wayne, N.J.-based company chose not to renew its lease on the 110,000-sq.-ft. flagship store. The lease expires next year, and current rental rates for such a desirable location have increased to $2,500 per sq. ft. for the ground floor, according to industry estimates.

“I do think we're beginning to flirt with the top level, where any retailer would have trouble making money,” says Faith Hope Consolo, chairman of The Retail Group at real estate services firm Douglas Elliman Real Estate. “While some of these flagships are advertising and the corporate parent can afford a loss leader, most of these statement stores really are supposed to contribute to the bottom line.”

Luxury retailers can afford the rent

Only a few select retailers and restaurants can afford the rents in Manhattan’s most expensive shopping districts—those that are high-volume, ringing up thousands of transactions daily, or those that sell luxury goods worth tens of thousands of dollars.

“Don’t confuse the best-known shopping districts with all of Manhattan—there are certainly more affordable (though admittedly not cheap) areas that aren’t Fifth, Madison, Times Square or Soho,” Consolo says, adding that the priciest spaces will be leased to international conglomerates with deep pockets. “You just aren’t a serious international presence with a store here somewhere,” she says.

Other retailers and restaurants are moving to less expensive side streets in Manhattan, out to the boroughs or exiting New York City entirely, creating new shopping neighborhoods. Consolo says those priced out of Soho are going to the Lower East Side or Brooklyn, and the Bronx is “finally getting its due,” as are neighborhoods in Queens.

Michael Greenberg, CEO of Level Group, a commercial and residential real estate firm, points to the high rents as the impetus for many restaurateurs to choose Brooklyn over Manhattan for new openings. “It’s one reason that Brooklyn now is on the cutting edge of the food scene,” he says.

Despite the sky-high rents in Manhattan’s best-known shopping districts, demand for space continues to be strong. “Globalization is bringing a wealth (pun intended) of retail entrants from around the world who can [afford the rents],” Consolo says.

While demand is one part of the equation for higher rental rates in certain shopping districts, new ownership is also playing a significant role. Case in point: 650 Madison Ave., the 594,000-sq.-ft. building that houses Crate and Barrel’s flagship store.

In 2013, a joint venture led by Oxford Properties, Vornado Realty Trust, Crown Acquisitions and Highgate Holdings acquired the 27-story tower for nearly $1.3 billion. According to various reports, the owners have plans to juice their returns by increasing retail rents.

“Building sale prices that assume very high retail rents [force] new owners who have paid top dollar based, in part, on the expectation of sky high retail rents, to seek rents in that range to assure that their properties produce the sort of returns that their investors expect,” Greenberg says.

Rob Frischman, who heads the retail division of EVO Real Estate Group, a commercial real estate management and leasing company, says Manhattan continues to be a landlord’s market, despite the high rents. Moreover, he doesn’t believe retailers will unilaterally abandon pricey districts in Manhattan or any other city with expensive retail rents.

“It’s not that retailers will ‘leave’ because of the rent pricing… I think there is a more esoteric change that continues as to what types of retailing can thrive in these expensive markets,” he explains.