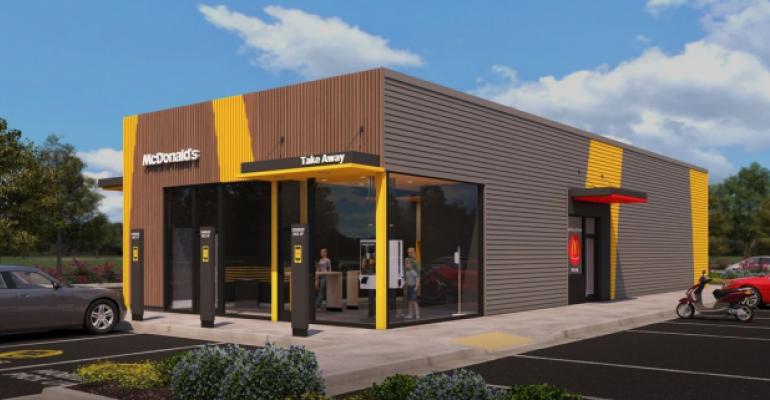 Is McDonald’s Trying to Catch Up to Rivals with New Growth Plan?

Adding a loyalty program and a premium chicken sandwich, announced Monday, are long overdue for the Chicago-based chain, says industry analyst John Gordon; franchisees have been asking for months for a sandwich that can compete with Chick-fil-A.

McDonald’s Corp. and its franchisees have spent millions of dollars over the last few years modernizing its stores for the next generation of consumers by infusing automation into it’s drive-thru lanes and adding kiosks in stores.

With 70% of revenue coming from the drive-thru, investing in that channel proved to be serendipitous for the brand during a pandemic that has pushed consumers out of dining rooms. Recovery is in sight for the brand.

But on Monday, it was clear that the quick-service brand was outlining a plan to catch up to rivals in some areas of its business. The Chicago-based chain's long to-do list included joining the year-old chicken sandwich war, engaging with consumers on social media and developing a world-class app.

“With its massive global footprint and enormous market position, McDonald’s has historically been slower to implement new concepts and new products. While that is very dangerous in our business, they finally are catching up,” industry analyst John Gordon, a principal at Pacific Management Consulting Group, said on Tuesday.

A year after being named CEO upon the abrupt firing of Steve Easterbrook, Chris Kempczinski and his core executive team unveiled the brand’s new growth plan dubbed Accelerating the Arches. The plan includes amplifying innovation that started three years ago with the brand’s massive restaurant modernization program, Velocity Growth Plan.

The plan also called for pushing for cultural relevance.

“This is a moment that we take pride in who we are, and how much good we can do with the world,” Kempczinski said. “ It’s not about putting purpose above profits. This is about recognizing the impact we have on our communities.”

It was a lot to unpack. Yet despite the avalanche of ideas, many questions remained unanswered including how franchisees would pay for their part of a plan to invest  $1 billion annually in new technologies during an economic crisis. The future of certain menu items like coffee and All Day Breakfast also remained fuzzy.

McDonald’s said it would innovate on its McCafe program, where it is the No. 2 coffee brand in the world by servings. But, how they plan to build on this program remained unclear.

The company said it would study markets individually and adapt based on “how their customers like to experience coffee.”

Gordon called this part of the strategy head-scratching as the company has already invested in various McCafe updates in recent years. McDonald’s added new espresso drinks in 2017 followed by a packaging redesign in 2019.

“I don't see that there's anything wrong with their coffee program right now?” Gordon said.

When asked to provide more details on pending coffee program changes, the company did not respond.

Could McDonald’s be looking at a subscription program like Panera Bread?

“I don't think that will work for McDonald's,” Gordon said. “The nature of the bakery cafe is to get people to come in and buy food.”

A long over due loyalty program

While copying Panera on subscription coffee isn’t a good idea, McDonald’s could look to rivals like Panera when it comes to juicing up their app.

“They got really behind,” Gordon said.

On Monday, the company said it is introducing next year MyMcDonald’s, a new loyalty program that offers consumers points for food, more personalization and direct delivery. A version of the program will roll out in the Phoenix area in the coming weeks.

Wall Street welcomed the prospect of a new app, which would enrich the company’s knowledge of consumer behaviors while also enhancing its already robust digital footprint.

But Gordon noted they have a lot of catching up to do, as peers and compeitors have been providing consumers with well-oiled apps and loyalty programs for years.

McDonald’s franchisees have been asking for menu simplification for years, especially after Easterbrook caved to consumer demands with the introduction of All Day Breakfast in 2015. In the weeks preceding the pandemic, operators made waves about the chain’s ability to compete with Chick-fil-A.

On Monday, they seemed to have won both battles but not the war.

McDonald’s said it plans to stick to its core menu of burgers, chicken, and coffee. The chain will innovate off classic menu items, introduce a premium chicken sandwich next year, as well as a plant-based menu.

Still, McDonald’s said menu simplification is important to maintain speed of service for consumers, which has improved throughout the pandemic. Having a limited menu has also helped margins, according to recent franchisee survey by Kalinowski Equity Research.

“I didn’t realize how much our larger menu was costing us in profits,” one franchisee said. Another wrote: “Almost all that is gone now should stay removed.”

In a statement sent to Nation's Restaurant News, McDonald's USA said any decision made to All Day Breakfast will be made in partnership with franchisees, and will take into account consumer demand while minimizing operational disruptions.

Restaurant consultant Tim Powell of Foodservice IP in Chicago said, for the short term, keeping the menu limited is a good idea.

With coronavirus cases spiking, it’s good to have “a contingency plan” in case dining rooms have to close again in markets where they have reopened.

One thing operators do want in the menu mix is a  premium chicken sandwich, which is expected to debut nationwide last year.

Gordon said franchisees “have been aghast” at the length of time it’s taken McDonald’s culinary team to develop a chicken sandwich that would compete with rivals like Chick-fil-A and Popeyes. Both chains “opened up the space” last year with they engaged in an epic social-media spat that went viral.

“I just don't know exactly what would cause two or three years to get a chicken sandwich ready to go,” he said.

Analysts, for the most part, cut McDonald’s some slack after the brand’s big announcement Monday. In a note to investors, KeyBanc Capital Markets credited McDonald’s for “investing ahead of the curve” when it comes to off premise technology.

As for Gordon, he said: “To their credit, even a battleship can turn and put on a new coat of paint.”