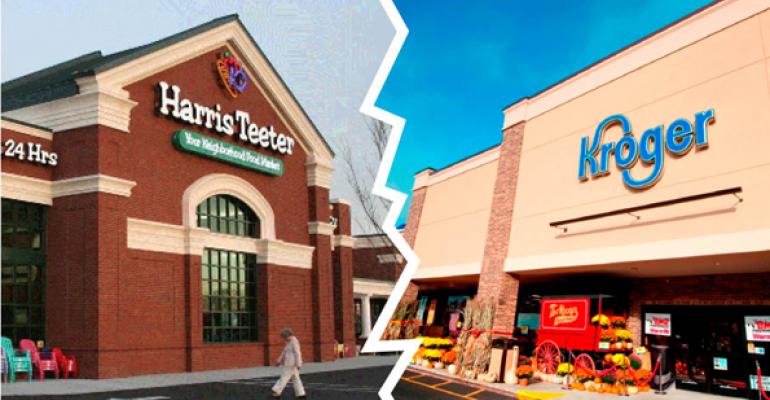 Kroger’s planned acquisition of Harris Teeter, the second major supermarket buyout of the year, again highlights that traditional grocery operators are fighting for survival as they face off against a crowded field of traditional competitors and new entrants—such as Amazon—in the battle for food dollars.

While Harris Teeter, which operates 212 stores, has been an outperformer in its Southeast and Mid-Atlantic strongholds, part of its decision to put itself up for sale likely had to do with encroaching competition from Walmart and Publix, notes supermarket consultant David Livingston, head of Pewaukee, Wis.-based DJL Research LLC.

For the second quarter of fiscal 2013, ended Apr. 2, Harris Teeter reported same-store sales growth of 3.66 percent and announced plans to open six net new stores. While some industry insiders were surprised that the chain was even exploring a sale, in Livingston’s view, Harris Teeter executives realized they couldn’t fight off Walmart on their own.

“I think this is good for Harris Teeter shareholders because over time the company would lose more and more market value to competition,” he notes.

According to the terms of the acquisition, valued at more than $2.4 billion, Kroger will pay $49.38 per share for Harris Teeter stock and assume $100 million of the company’s outstanding debt.

Facing Walmart and Publix in the South, it seemed that Harris Teeter was exploring expanding into the Washington, D.C. market as a growth path, but the market is extremely hard to penetrate, according to Jeffrey Edison, principal with Phillips Edison & Co., a privately-held shopping center owner with a 28-million-sq.-ft. portfolio and sponsor of the Phillips Edison-ARC Shopping Center REIT Inc. Doing so with Kroger’s help, given the company’s scale, should be much easier.

On Kroger’s side, the deal should result in up to $50 million in cost synergies, the possibility to enter Northern Virginia and Maryland markets that are experiencing healthy grocery sales growth and potentially, some insurance against Amazon through Harris Teeter’s click and collect program, according to Ken Perkins, an analyst with Morningstar. Kroger currently operates more than 2,600 stores.

The program allows customers to order groceries online and pick up their ready-to-go shopping bags at the stores.

“It’s too early to determine how much Kroger could deploy this model to its entire store base, but we see little downside from Kroger gaining a greater perspective on this strategy, especially as AmazonFresh gains traction and other non-traditional retailers continue experimenting with in-store lockers and other pick-up options,” Perkins wrote in a note on July 9.

In addition, acquiring Harris Teeter will give Kroger some ammunition against Publix in southeastern states, where Kroger has limited presence, adds Edison.

“It gives them a pretty strong foothold in that market,” he says. “I thought it was a great buy.”

On a larger scale, the deal illustrates that the grocery market is still a battlefield, with constantly evolving alliances and a clear split between winners and losers, according to Neil Stern, senior partner with Chicago-based consulting firm McMillanDoolittle LLP. He notes that the reason Harris Teeter attracted the interest of another supermarket operator and was able to get premium pricing was because it’s a strong regional chain with an attractive upscale offering. A weaker player would more likely be picked up by private equity financial engineers, as it happened with the Supervalu brands earlier this year.

And the weaker players tend to be midmarket national chains that offer neither steep discounts nor organic products, Stern notes. He names Safeway, Delhaize and A&P as the operators that are currently causing the most concerns, in addition to Supervalu.

“The grocery sector continues to be a challenging market,” he says. “There are lots of people who want to sell food, from dollar stores and warehouse clubs and hard discount stores like Aldi to drugstores. As a result of that, the grocery sector has grown at a fairly negligible pace. The national number one competitor is, of course, Walmart, and [that means] you have to find a way to be different that’s not necessarily price-driven.”

To some extent, a chain’s success depends on a given trade area, according to Edison, who notes that Safeway performs well in Western U.S., but is falling behind in Chicago, for example. “It’s hand to hand combat in each market,” he says. But he concedes that mergers and private equity buyouts will likely continue to be a major trend in the grocery sector for the foreseeable future.

“There’s been a consistent moving around of the grocery business as new concepts evolve and new competition has come in,” he says. “It’s constantly changing and I think there will be consolidations and spinoffs as each grocer figures out where they can get dominant market share and profitability.”