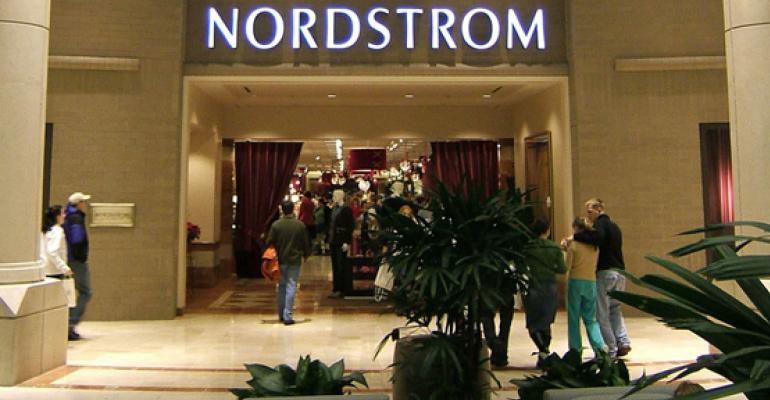 Nordstrom Suspends Buyout After Struggling to Get Financing

(Bloomberg)—Nordstrom Inc. is suspending efforts to take the company private after struggling to get financing with favorable terms, another sign that the department-store industry has lost favor with both customers and investors.

The controlling members of the Nordstrom family will renew a review of its operations after the holiday season, the company announced on Monday. In scrubbing the deal for now, the chain cited “the difficulty of obtaining debt financing in the current retail environment.”

The transaction was meant to help the company continue its turnaround efforts outside the glare of market scrutiny. But even Nordstrom’s prestige -- the upscale retailer is seen as a stronger business than the likes of Macy’s Inc., J.C. Penney Co. and Sears Holdings Corp. -- couldn’t sway enough potential lenders.

“Nordstom is a high-quality retailer, but it is still an apparel retailer, and that becomes difficult to finance,” said Tom Shandell, chief executive officer of Marble Point Credit Management. The industry is being “painted with one brush,” he said.

The announcement sent the shares down as much as 6.5 percent to $39.86 in New York trading. The stock was already down 11 percent this year through the end of last week.

Nordstrom embarked on the buyout plan in June, sending the stock on its biggest rally in more than eight years. Family members formed a group to evaluate a possible deal, which would involve acquiring 100 percent of the outstanding shares. The board also created a special committee in connection with the idea.

Together, the Nordstrom family owns about 30 percent of the company, which was founded as a Seattle shoe store in 1901. Gordon Haskett analyst Chuck Grom estimated that they needed to raise between $5.65 billion and $8.19 billion to acquire the remainder of the retailer.

But brick-and-mortar retail is a tough sell. While credit generally has been free-flowing for companies amid a global hunt for yield, it’s been a different story for an industry that has increasingly come under distress.

Borrowing costs in a Bank of America Merrill Lynch index of junk-rated retailers climbed 1.3 percentage points during the past year to 8.31 percent. For junk issuers more broadly, the measure dropped about half a percentage point to 6 percent, the index data show.

The entire department-store industry has been scrambling to overhaul operations after years of slowing sales. Macy’s, J.C. Penney and Sears are closing hundreds of locations and trying to beef up their online sites.

Nordstrom hasn’t been hit as hard by that downturn. In August, the company reported a quarterly same-store sales gain of 1.7 percent. Analysts had predicted a drop of 0.5 percent.

Still, the company has been looking for new ideas in a bid to freshen its image. Last month, Nordstrom announced a smaller store concept called a “neighborhood hub” that doesn’t carry inventory on site. Instead, customers try on clothing and have it delivered.

Leveraged buyouts have been a risky gambit for many retailers. Toys “R” Us Inc. was pushed into bankruptcy last month, more than a decade after a take-private deal with Bain Capital, KKR & Co. and Vornado Realty Trust loaded it with debt.

Nordstrom has about $2.7 billion of debt maturing between 2020 and 2044, according to data compiled by Bloomberg. Most of that debt trades above par, and the company is rated triple-B by all three major ratings agencies, an investment-grade rating. S&P Global Ratings has said that a potential buyout of the chain would involve “significant leverage” that could lead to a downgrade of the company’s debt.

Neiman Marcus Group Ltd., another upscale department-store chain, squelched hopes of a takeover deal in June. The retailer, which indicated earlier in the year that it was exploring strategic options, said it was no longer holding deal talks. Neiman Marcus was previously reported to be in discussions with Hudson’s Bay Co., the owner of Saks Fifth Avenue, about a buyout.

“Given what you have seen, including Neiman Marcus, when you look at retailers in our space, it become difficult to finance,” Shandell said.