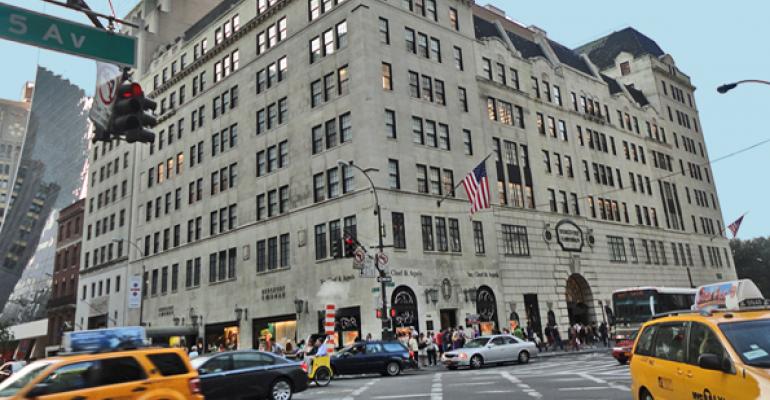 Street retail is becoming so much a part of some REITs’ investment strategy that it’s now getting spotlight analyst coverage. This week, RBC Capital Markets put together a conference call on the segmented market for U.S. street retail, forecasting that it will become a staple in many publicly-traded portfolios going forward.

According to the report by RBC REIT analyst Rich Moore, there are 11 “institutional” street retail markets in the country, totaling 10.2 million sq. ft. of space and $118 billion’s worth of product. These markets include Fifth and Madison Avenues in New York City, Michigan Avenue in Chicago and Union Square in San Francisco, among other easily recognizable streets. In RBC’s estimates, retail rents on institutional retail streets can reach up to $3,240 per sq. ft., and such properties trade at cap rates in the 4 percent to 5 percent range, and sometimes lower.

Street retail offers landlords some other advantages as well, noted Ken Bernstein, president and CEO of Acadia Realty Trust, during a conference call on May 12. The supple/demand ratio there tends to be more favorable to landlords than at suburban retail centers. The leases are shorter, so there are more opportunities to raise rents. And annual contractual rent growth is close to 3 percent, above that for suburban locations. The street retail play has proved so successful for Acadia, the REIT is investing not only in established locations, but in what Bernstein calls “next generation” streets like the Bowery in New York City and Broughton Street in Savannah, Ga. These areas offer “higher risk and, hopefully, higher returns,” he notes.

For his part, Sandeep Mathrani, CEO of General Growth Properties, talked about the unique branding value that street retail holds for chain retailers. He noted that three of today’s most successful global fast-fashion chains—H&M, Zara and Uniqlo—first attempted to break into the U.S. market with stores at regional malls, with limited success. It was the opening of flagship stores on high streets, particularly in New York City, that brought them the kind of brand recognition that allowed them to expand throughout the country. Locations on urban high streets create a branding opportunity, drive sales and allow retailers to display their entire merchandise collection, Mathrani said.

“The street retail business is the most compatible business to the regional mall business,” Mathrani noted. “Street retail is predominantly flagship retail. Almost all of the stores operate profitably even though the rents have started [getting higher]. It’s a must have.”

At the moment, however, publicly traded REITs, represented primarily by GGP, Acadia, SL Green and Vornado, own only 4.3 percent of institutional quality street retail in the U.S.

“Given the fragmented ownership nature of street retail, we suspect that this form of street retail will be the first to be accumulated by major real estate landlord,” Moore writes. “Over time, however, we would not be surprised to see the public REITs work their way into some of the other street sub-categories as well.”