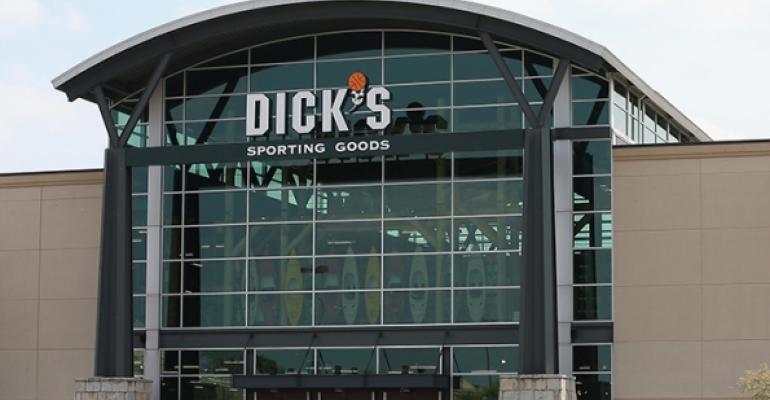 Dick's Sporting Goods Inc. said Tuesday that sales at established stores rose 5 percent in the most recent quarter from the year before as it picked up retail locations from now-defunct sporting goods competitors such as Sports Authority and Golfsmith.

But the company also warned sales and earnings growth would slow in the coming year, lower than analyst consensus, even as it opens 60 new stores. Shares dropped as much as 9 percent on the news.

Investors spent much of 2016 bidding up Dick's stock under the assumption it would score big as competitors closed shop. When Oppenheimer analyst Brian Nagel upgraded Dick's to the equivalent of "buy" from "hold" in September, he estimated the company could get a sales boost of $110 million to $225 million by taking 10 to 20 percent of Sports Authority's business.

But Nagel ended up downgrading the stock last month, after Under Armour Inc. and other big suppliers posted poor results. He said Dick's might be gaining more of the spending pie, but the pie is shrinking. U.S. spending on sporting goods fell by 8 percent in February from a year earlier and has been losing steam for the past seven months, according to data from payment-processing firm First Data Corp.

And while Dick's kept saying on its conference call Tuesday that it was winning market share from failing retailers, it didn't provide any actual numbers on that front. Its weaker-than-expected forecasts didn't really instill confidence, especially considering the chain will start lapping easier comparisons in the upcoming third and fourth quarters.

When a store closes, 15 percent of its sales typically move online to a retailer's website, 15 percent go to nearby stores, and 70 percent simply disappear, according to an analysis by Kevin Hillstrom, a former Nordstrom marketing executive who now runs a retail consulting business. When retailers close stores, nearby stores lose foot traffic, and even competitors can suffer, according to Hillstrom. Many customers turn to Amazon.com Inc.

The local-search app Foursquare found that shoppers drawn to store-closing sales stopped going to healthier competitors while they were spending money at the shuttering retail stores. While much of this traffic bounced back, the gains weren't spread evenly among retailers.

We've seen such a trend play out among struggling department stores. Take J.C. Penney Co., which last year defiantly said it wouldn't follow Macy's Inc.'s lead in closing more than 100 stores. At the time, J.C. Penney said it was comfortable with its store count and looked forward to picking up former Macy's customers.

Fast-forward a few months to February, when J.C. Penney announced a plan to shutter 13 to 14 percent of its locations -- more or less matching Macy's plan -- after it became clear that 130 or so of its stores weren't profitable enough to merit more investment. So much for picking up those Macy's sales.

Over in another struggling category, electronics, RadioShack's current owner is now contemplating another bankruptcy. And regional electronics chain HHGregg Inc. filed for bankruptcy on Tuesday, just days after its CEO defended a plan to return to profitability by closing stores.

Best positioned to benefit from those losses would be Best Buy Co. Inc., the market leader among brick-and-mortar electronics stores. On its earnings call last week, Best Buy indicated that 20 percent of HHGregg's store base overlapped with its own. Best Buy said a bankruptcy could send $1 billion in sales to HHGregg competitors. Best Buy's stock jumped 6.3 percent.

That reaction shows investors still haven't learned their lesson. Yes, there will always be winners and losers in retail. But in today's environment, where shoppers are fickle and stores have to fight fiercely just to hang on to their customers, one company's pain doesn't exactly mean another's gain.