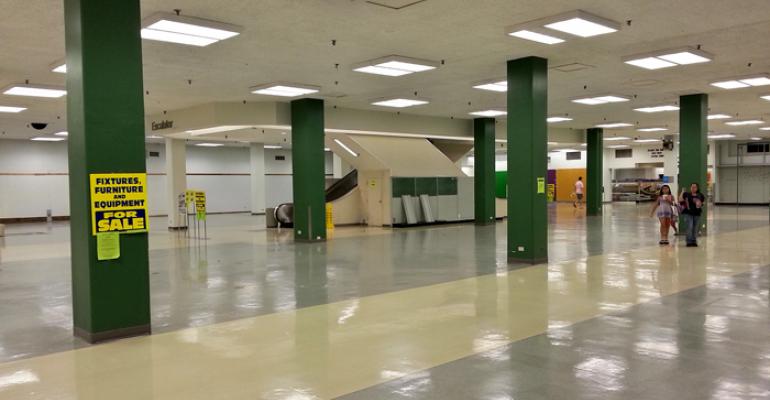 One year from now Macy’s expects to have closed 100 stores, leaving it with about 628 brick-and-mortar locations. The intent, gleaned from the company’s August 11 statement, is clear: to shed weaker stores, shore up the retailer in competitive markets and become as strong in omni-channel operations as it once was in traditional retailing.

Retailers continue to adapt to a business environment in which they have to battle for dominance on two fronts: competition from peers and the steady growth of e-commerce’s share of overall retail sales. Figures for e-commerce’s share of all national retail sales vary, especially when comparing industry figures and those from the U.S. Department of Commerce, which also tracks retail sales. The overall trend, however, is harder to overlook. Global consulting firm Deloitte predicts that online purchases will account for roughly 30 percent of all U.S. retail sales by 2030, according to “E-Commerce Implications for Retail Real Estate,” a 2015 report by USAA Real Estate Company. It is a potentially daunting picture of the future.

Macy’s announced the store closings on the same day that it reported second quarter total sales were $5.8 billion, a 3.9 percent dip from the same period last year. Several days later the U.S. Department of Commerce noted that e-commerce sales accounted for 8.1 percent of total sales in the second quarter, on a preliminary basis. That share of online sales increased from 7.1 percent in the same period a year ago, a revised figure, the department said.

“Everybody looked at it and said, ‘this is a direct result of business moving online,’” says Jan Kniffen, CEO of J Roger Kniffen WWE, a New York-based firm that consults with institutional retail investors, about the Macy’s announcement. “Nobody has said that with respect to these closings before.”

Many retailers across all categories have already adopted multi-channel sales models. The ongoing question is how landlords will reuse the space when anchor stores like Macy’s and specialty retailers adopt leaner store footprints.

It turns out that landlords have plenty of options, and have already put some of those strategies to work.

The retail real estae industry might have already positioned itself to adjust to a world with smaller store footprints. Lifestyle centers, mixed-use properties and other open-air centers, for instance, often include experience-driven tenants.

Landlords are more likely to consider replacing an anchor retailer that is failing with a Cheesecake Factory or an IMAX, Kniffen says. Grocery operators like Whole Foods and Trader Joe’s, with loyal customer bases and repeat foot traffic, have become go-to additions to shopping centers, according to the USAA Real Estate Company report. Those companies post very high average sales per sq. ft., of about $1,723 and $923, respectively.

Landlords are also increasingly leasing space to business not traditionally seen in a shopping center, like doctor’s offices.

“Some of these malls will have to be more like community centers, and include tenants like doctor offices, or residential spaces,” Kniffen says.

Not all of the retail real estate industry’s hopes for robust occupancy rates rest on experience-driven tenants, however. Industry experts expect Amazon, eyeglass and sunglass retailer Warby Parker and men’s retailer Bonobo’s all to open locations nationwide. They are just unlikely to maintain store counts of 1,000 units, Kniffen notes.

“I don’t think the world of brick-and-mortar will go away, but I think it will be greatly reduced in its presence,” he says. “If I’m right, 50 percent of non-bar, non-restaurant retail sales will be online by 2030. That is only 13.5 years from now.”

Meanwhile, while landlords diversify the tenant mix in their centers, they have also focused on redeveloping the properties. The industry has succeeded in constraining the amount of new supply being put into the development pipeline, and has focused on redevelopment, according to the ICSC spokesperson. She added that occupancy rates seem to support this. The national total mall occupancy rate increased slightly to 94 percent in the second quarter of 2016, compared with 93.9 percent in the second quarter of 2016. 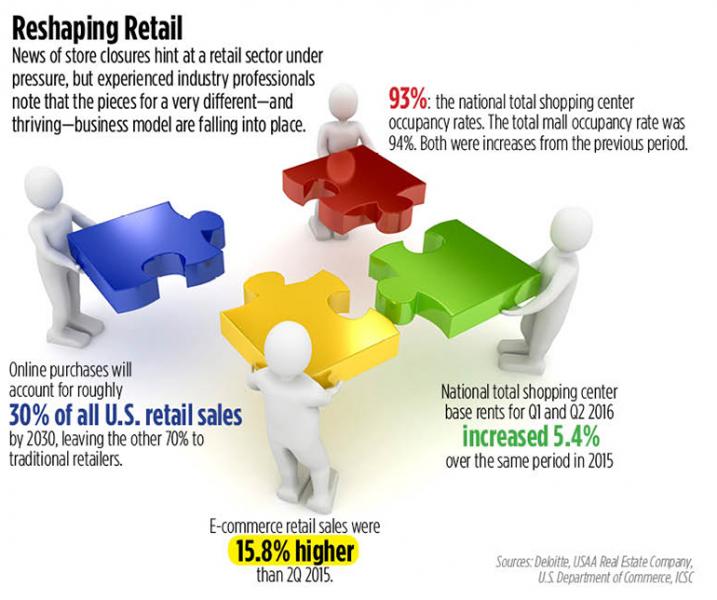