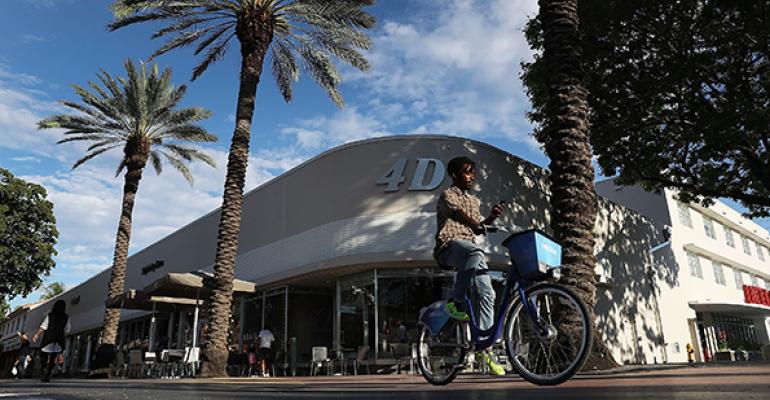 Retail Rents in Major Cities Are Beginning to Descend

Department stores and specialty retailers have been under constant pressure from industry-changing forces, including the rise of e-commerce, fierce competition in the brick-and-mortar space and changing consumer tastes. Something had to give.

That something, according to retail real estate experts, is asking rents. At the recent ICSC’s New York National Dealmaking Conference, executives including Anjee Solanki, national director of U.S. retail services with Colliers International, noted that retail rents are softening across property types.

Certainly retail asking rents have room to come down. Rents on spaces in Manhattan, for instance, are generally still higher than they were 10 years ago. Rents vary from neighborhood to neighborhood, so a retailer might have to budget $1,000 to $1,500 per sq. ft. on Fifth Avenue between 52nd and 57th Streets, while another store operator might have to pay only $500 per sq. ft. for an equivalent space elsewhere.

And who can overlook Nike’s recent mega-lease deal in Manhattan? The athletic shoe and clothing company is said to be taking over 60,000 sq. ft. of space at 650 Fifth Avenue, in a deal worth $700 million over the term of the transaction. It is said to be the largest retail lease deal of its kind in Manhattan.

The Nike transaction is a striking reminder that in some districts, rents will probably remain at 10-year highs, despite price corrections happening in other areas.

Elsewhere, however, retailers are getting a break. In its third quarter 2016 report, the Real Estate Board of New York, a trade association, found that asking rents for ground-level space in 10 of Manhattan’s 17 major retail corridors had decreased on a year-over-year basis. Otherwise, wherever rent increases occurred, they were generally modest.

“There is a trend away from stores that sell things you can get on the Internet,” says David Green, vice chairman of Colliers International’s retail group. “That is accounting for some of the pullback.”

Green added that young adult consumers are choosing to spend their money on electronics subscriptions and smart devices, leaving less money for clothing and other traditional retail items.

“The categories they are spending money on might lend themselves more to Internet purchases than hard goods,” Green says.

Retail experts agree that the trend, which took hold in 2016, is expected to continue into 2017.

Manhattan is certainly not alone among American cities where retailers are getting more breathing room on rents. Miami, another major shopping city, offers two examples of retailers that were able to use the turning tides in their favor. They occurred on Collins Avenue, one of the city’s two busiest retail arteries, where retailers such as Armani, Intermix, UGG and Versace lease stores. Along with Lincoln Road, which attracts more moderately priced retailers, landlords along Collins Avenue can command rents of $300 per sq. ft. and higher.

Fit2Run, an athletic shoe retailer, recently renegotiated its lease on 13,000 sq. ft. of space at 653 Collins Avenue, according to industry professionals. Rather than absorb a rent increase or vacate the space, Fit2Run struck an agreement to pay expenses to the landlord on the property, according to John Brod, a partner at ABS Partners Real Estate, a property management company based in New York City.

Meanwhile, commercial real estate landlord Jamestown plans on retaining Guess in its current space at 546 Lincoln Road in Miami by renewing its lease at a lower rent, Bord said in an email.

“Jamestown is a perfect example of an owner or landlord who understands the importance to keeping their retail leased in order to justify the office space above,” Brod said. “Jamestown, in my opinion, is very creative in structuring retail deals to maximize value on the space above. Jamestown recognizes that a vacancy at [ground level] does nothing good for an upper-level space.”

If a tenant is paying $300 per sq. ft. on a lease that was negotiated during a period of record high rents, then a correction in market pricing will likely lead to rent reductions during lease renewals, Brod notes.

Rents on Lincoln Road can range from $250 to $350 per sq. ft. In the current environment, rates for retail spaces in that area might come down to $200 to $300 per sq. ft., but that is still higher than it was four years ago. The same dynamic is at work in Los Angeles and other major markets.

“They are all feeling that same adjustment,” Brod says.