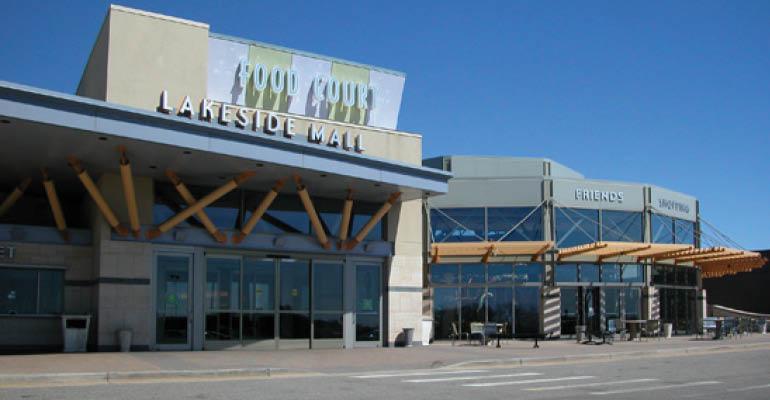 With store closures accelerating, landlords are having to change course and find ways to create malleable space.

(Bloomberg)—Outside Detroit, plans have been in the works for two years to transform the outdated Lakeside Mall into an open-air center with green space and a waterway. With the property in foreclosure and its ownership in limbo, the blueprints will have to be flexible.

The mall’s troubles have spiraled since landlord GGP Inc. stopped paying the mortgage last year and then failed to find a buyer for the property amid turmoil in the retail industry. The center’s value, already less than the $135 million loan, was slashed another $25 million in February. Officials for the city of Sterling Heights, Michigan, aren’t giving up on their project. They’re preparing to court new investors with opportunities that go well beyond retail, and anything from apartments to hotels and restaurants is possible.

“We understand that malls will never be the same,” said Luke Bonner, an economic-development adviser working with the city on the Lakeside project. “E-commerce is taking a toll on malls whether people want to admit it or not. It’s a reality.”

The forces bearing down on the project at Lakeside are playing out across the U.S., pushing property owners to redraw development plans to keep up with rapid changes in the industry. With store closures accelerating, landlords are having to change course and find ways to create malleable space that can accommodate a revolving roster of tenants.

More than a dozen retailers have filed for bankruptcy this year and chains such as Macy’s Inc. are planning to shutter locations amid the rise of online shopping and changing consumer habits. As many as 13,000 stores are expected to close next year, compared with 4,000 in 2016, according to brokerage Cushman & Wakefield Inc.

“The ground is moving beneath our feet,” said Mark Toro, a partner at North American Properties, a developer with retail projects across the U.S. “It’s moving at light speed.”

At Avalon, an 86-acre (35-hectare) development on the outskirts of Atlanta, Toro’s firm changed directions multiple times since acquiring the site in 2011, churning through 75 different merchandising plans, he said.

The project, originally envisioned as a shopping center, encompasses more than 500 apartments, 101 single-family homes and 333,000 square feet (31,000 square meters) of office space in addition to stores. A hotel and conference center will open next year at the sprawling development, which Toro describes as a town square. Prior to the recession, Toro’s group built real estate dedicated primarily to retail, but the focus has shifted in recent years.

“We concluded that shopping centers are dead and gone, and the only way to create value in retail real estate is to fabricate a street experience,” he said.

Avalon’s retail tenants include such household names as Crate & Barrel, J. Crew and Whole Foods Market. Both Whole Foods and Regal Cinemas, which operates a 12-screen theater at the center, revamped their plans midstream to meet changes in the local market, according to Toro. The retail landscape is evolving so quickly that many of the stores at Avalon would look different if they were designed today as opposed to two years ago, he said.

“Eventually, you have to pour concrete,” Toro said. “You try to pick the best horse and the concept that is most likely to survive.”

Across the country, tenant turnover is speeding up. Retailers and restaurants are no longer as willing to commit to a space for as long as 10 or 15 years, especially at weaker properties, according to Greg Maloney, chief executive officer of Americas retail at brokerage Jones Lang LaSalle Inc.

“There’s going to be more turnover, and quicker than we’ve ever experienced before,” Maloney said.

Property owners are grappling with how to create spaces that can be used in different ways without dedicating too much cash to a particular idea, according to Maloney. One solution some landlords are experimenting with is using fabric partitions in place of walls, he said.

“You can put up a false front and make it look vibrant,” Maloney said. “Those types of things are what we are going to be looking toward in the future.”

Even healthy retailers are shuttering stores. Companies filing for bankruptcy include children’s clothing chain Gymboree Corp., which announced plans last month to close 350 locations, including its one at the Lakeside Mall.

Landlord GGP relinquished that 1.5-million-square-foot property to its lender in June after negotiations with a buyer fell apart. City planners have proposed numerous options to incorporate the retail into a broader master plan for the community, including creating a canal using the man-made lake at the property’s edge.

GGP and C-III Asset Management, the firm that took over the mall on behalf of lenders, declined to comment. On its earnings call Wednesday, GGP said that it “disposed” of the property as part of its strategy of pruning lower-quality holdings.

The Chicago-based company, the country’s second-biggest mall owner, surprised investors on the call by saying it ended plans to explore strategic alternatives. CEO Sandeep Mathrani said GGP would instead focus on making the most of its properties by adding non-retail uses such as apartments, offices, hotels, gyms and movie theaters.

In Arlington, Virginia, Forest City Realty Trust Inc. was stumped on how to update Ballston Common Mall, acquired and redeveloped in the 1980s. The company spent several years studying options before Macy’s vacated a furniture store at one end of the center in 2013, according to Will Voegele, a senior vice president at Forest City.

“It wasn’t until we acquired the furniture store that we really had the opportunity to re-envision and re-imagine what the property would be,” he said.

Forest City was able to reconfigure its plan to add apartments, while also creating an open-air shopping district with access to the street, according to Voegele. The remade complex, slated for completion next year, will encompass more than 1.6 million square feet of retail, residential, office and entertainment real estate.

Malls that survive the current retail shakeout will be in places where the community has grown up around the property, rather than the generic shopping centers at highway interchanges that dominated the U.S. suburbs for decades, according to David Kitchens, an architect with Cooper Carry, which is working with Forest City at Ballston Common. Landlords that want to be successful are thinking about lifestyle first and retail second, he said.

Still, some areas aren’t conducive to developing a center that would draw today’s consumers out to spend money, and not every American mall can reinvent itself as a vibrant town square, Kitchens said.

“You can’t make beautiful mixed-use out of everything just because you want to,” he said.