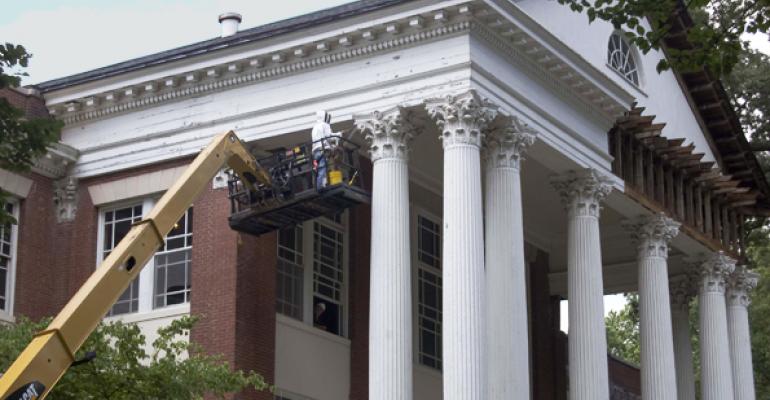 A provision in earlier drafts of the legislation would have allowed chains to immediately write off their expenses when improving locations, or moving into empty ones.

(Bloomberg)—Retailers and restaurants were supposed to be the big winners under the Republican tax law, but a last-minute drafting error that doubles the tax costs for badly-needed store renovations could eat into those gains.

Now the industry, led by Target Corp., Best Buy Co. and KFC-owner Yum! Brands Inc., is becoming more aggressive in pushing for a solution. In letters and visits to Washington last week, representatives urged congressional leaders of both parties to correct what’s been dubbed the “retail glitch.” While GOP leaders acknowledge the mistake, they haven’t guaranteed a quick fix.

A provision in earlier drafts of the legislation would have allowed chains to immediately write off their expenses when improving locations, or moving into empty ones, instead of deducting some of those costs over more than a decade. Its estimated cost -- included in a larger tax benefit worth $4.9 billion over a decade -- was calculated as part of the bill’s overall tab to the federal government. But the language didn’t make it into the final version. Even worse, the omission -- along with another error -- actually means that renovations will face a much higher tax burden.

Corrections are usually pretty routine after a massive piece of legislation such as last year’s tax overhaul, but nothing is simple with a Republican-controlled Congress that has struggled with basic tasks, like funding the government. Industry lobbyists have been fruitlessly pushing for a correction since the law was signed in December. There isn’t outright opposition, but finding consensus between the parties on anything is difficult, especially ahead of midterm elections in November.

“The political issue is when will they able to get a bill moving that can include these fixes?” Bernstein said. “At this point, what legislation can make it through both houses of Congress?”

One opportunity may come at the end of September when a spending bill has to be passed to avoid another government shutdown. A package with similar stakes passed in March and Congress attached a fix for the so-called grain glitch, which created an unintended tax windfall for some farms.

Senate Republicans didn’t need any Democrats to pass the 185-page tax law, but they’ll have to get some to sign onto a retail fix -- and the Democrats will want something in return. They’ve hammered the overhaul as a giveaway to the rich, and highlighted how the speed of its passage -- in a matter of weeks -- was bound to lead to inadvertent consequences. That kind of rhetoric will likely only increase during the run-up to the elections.

John Cornyn, the No. 2 Republican in the Senate, said he’s working with the House Ways and Means Committee to identify corrections to the tax bill. That list would likely include the retail glitch, but it isn’t clear it will get addressed this year, the Texas Republican said.

The key to getting some Democrats on board would be pairing tax corrections with a measure that’s traditionally a priority for Democrats, such as credits for businesses to invest in low-income areas or renovate historic buildings, according to Senator Ben Cardin, a Maryland Democrat.

In the meantime, retail and restaurant chains say the blunder could cause companies to reconsider opening new stores that would help revitalize declining malls. It also undercuts one of President Donald Trump’s main talking points in pushing the tax overhaul: that it would get firms to invest more in America.

Under the previous tax code, 84 percent of the cost of some store improvements could be depreciated over 15 years with half coming in the first year, according to the Tax Foundation. Republican tax writers intended to offer 100 percent right away through 2022, but because they didn’t specify a recovery period for “qualified improvement property,” those expenses will only be able to be written off over 39 years. That equates to just 42 percent of the total cost being written off.

The NRF’s Bernstein pointed to a major retailer, which she declined to name, that recently balked at taking over several abandoned stores of a failed chain because the mistake would make it much more expensive.

The glitch may also cause significant cash-flow disruptions -- especially for restaurant franchisees who are obligated to upgrade their stores every few years. The ripple effect could slow work for construction firms and suppliers of everything from sprinklers to lighting systems, the retailers said.

“We continue to reinvest in hundreds of local communities by planning restaurant remodels, in some cases several years in advance,” said Heidi Schauer, a spokeswoman for Wendy’s Co. Tax certainty “is an important part of that planning process, due in large part to its impact on cash flow.”

Store renovations are the lifeblood of these chains, spending billions of dollars each year on items such as paint and installing wireless internet and energy-efficient lights. For retailers, these kinds of investments are key to staying relevant with other chains and online competitors like Amazon.com Inc.

Republicans said they had wanted to give these industries another windfall, following a big cut in corporate levies -- one that retailers greatly benefited from because they’re mostly domestic and were paying some of the highest tax rates.

But the mistake is already leading to political finger-pointing. “It would’ve been better if our Democratic friends had worked with us,” Cornyn said. “We could’ve come up with a product that was glitch-free.”