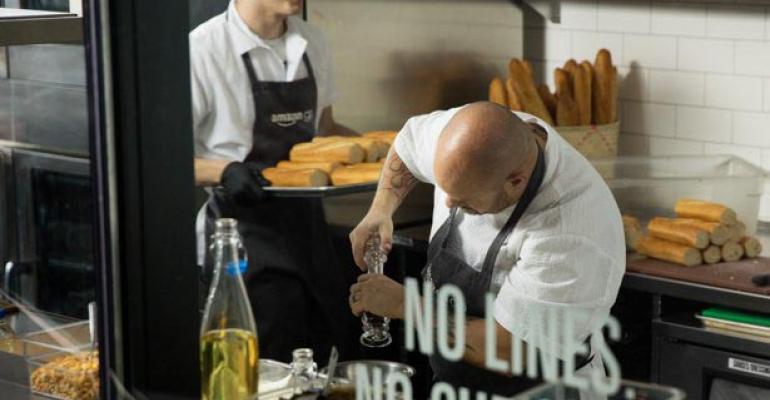 Amazon on Monday announced plans to open an 1,800-square-foot convenience store early next year, likely sending shudders through Wal-Mart Stores Inc. and Target Corp., which are already scrambling to keep up with Amazon on e-commerce.

Amazon's move to the physical realm is no surprise. It has already started building bookstores on college campuses and in shopping malls. Mall operator General Growth Properties's CEO revealed last February that Amazon could open as many as 400 bookstores. And there have been reports for months that Amazon would be rolling out convenience stores.

What is new is the concept Amazon revealed on Monday, called Amazon Go, which will use sensors and AI to eliminate checkout lanes. A promotional video shows customers, with the help of a smartphone app, simply grabbing groceries and walking out the door.

Physical retailers have reason to fear this is more than just a gimmick.

The speedy checkout technology matters because retailers have been trying to crack the checkout process for decades. If Amazon can solve one of brick-and-mortar retail's biggest sources of friction, then that could be a harbinger of how else the company might turn physical retail on its head.

Walmart once said it could save $12 million for every second it cuts from the checkout process in the U.S. This belief drove a Walmart smartphone app that let customers scan items as they shopped. The app flopped after customers said it took too long to individually scan carts full of items.

Other retailers have tried self-checkout kiosks, and Apple Pay was created partly to help speed shoppers through checkout, especially since new chip-enabled credit cards have further slowed the process. Easier, quicker payment is one of the biggest reasons customers stick with companies such as Uber and Amazon.

It's an area of the retailing world, and a huge one, that Amazon hasn't managed to dominate -- yet.

Amazon Go will give Amazon real-life insight into how consumers shop for groceries in the physical world. That can help it tailor the digital experience for grocery shopping, which isn't quite like shopping for headphones or phone cases.

All hope is not lost for traditional retailers. There's actually an upside to Amazon entering the physical retail realm: Operating in the daylight of physical stores -- as opposed to behind secretive, online algorithms -- will give traditional retail rivals such as Walmart and Target a front-row seat to Amazon's practices.

Being able to walk right into Amazon's stores, to see how they operate and to talk to customers, gives other retailers a chance to quickly match Amazon's best ideas. For smart competitors, this scary moment could be an opportunity.

Shelly Banjo is a Bloomberg Gadfly columnist covering retail and consumer goods. She previously was a reporter at Quartz and the Wall Street Journal.