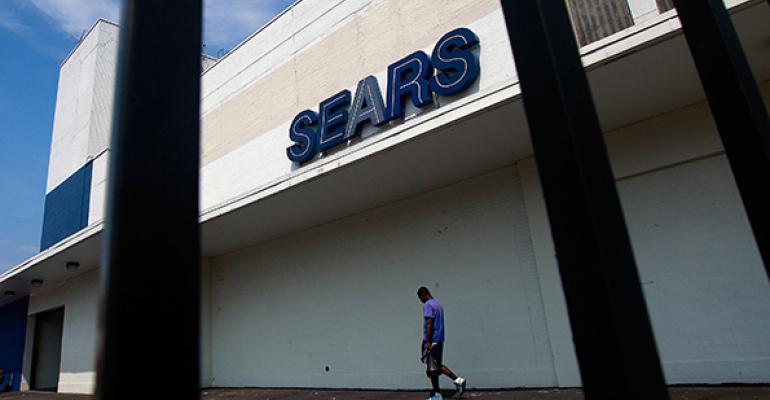 Sears added so-called going-concern language to its latest annual report filing, suggesting that weak earnings have cast a pall on its ability to keep operating.&nbsp;

(Bloomberg)—Sears Holdings Corp. suffered its worst stock decline in six weeks after acknowledging “substantial doubt” about its future, raising fresh concerns about whether a company that was once the world’s largest retailer can survive.

Sears added so-called going-concern language to its latest annual report filing, suggesting that weak earnings have cast a pall on its ability to keep operating. The 131-year-old department-store chain, which has lost more than $10 billion in recent years, was cited last year by Fitch Ratings as a company at high risk of defaulting.

The disclosure comes after more optimistic signs from the company, which has been working on a turnaround under Chief Executive Officer Eddie Lampert. Sears posted a narrower loss than predicted in the fourth quarter, and it has pledged to lower its debt burden and cut annual expenses by at least $1 billion. That upbeat assessment had helped propel the stock in recent weeks. The shares had gained more than 60 percent since Feb. 9.

That rally fizzled with Tuesday’s filing, sending Sears’s stock down as much as 15 percent to $7.77 in New York trading. It was the biggest intraday drop since Feb. 7.

“Our historical operating results indicate substantial doubt exists related to the company’s ability to continue as a going concern,” the Hoffman Estates, Illinois-based company said. But the company added that its comeback plan may help alleviate the concerns, “satisfying our estimated liquidity needs 12 months from the issuance of the financial statements.”

Lampert, a hedge fund manager who is also Sears’s biggest investor, aims to reduce debt and pension obligations by $1.5 billion. The CEO has helped keep the ailing retailer afloat by offering more than $1 billion of assistance, including a $500 million loan facility announced in January.

As part of its comeback plan, Sears has closed stores, sold real estate and offloaded businesses. Earlier this month, the department-store chain completed the sale of its Craftsman tool brand to Stanley Black & Decker Inc. for about $900 million.

Sears, which also operates the Kmart chain, has reviewed its DieHard batteries and Kenmore appliance brands for potential sales.

“While our historical operating results indicate substantial doubt exists, we want to be very clear that we’re taking decisive actions to mitigate that doubt,” Howard Riefs, a Sears spokesman, said in an email.