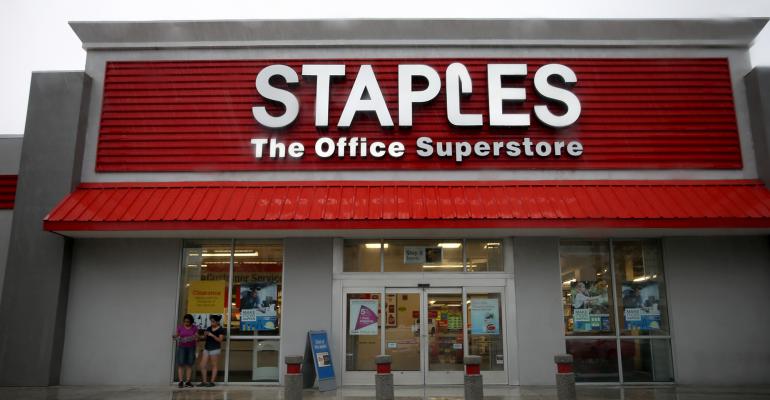 The private equity firm wants to undertake a recapitalization that will leave the retailer with $1 billion in additional debt.

(Bloomberg)—Sycamore Partners is looking to take most of its cash out of Staples Inc. through a recapitalization that will saddle the company with roughly $1 billion of additional debt, according to people with knowledge of the plan.

If successful, the debt sale will allow the private equity firm to recoup roughly two-thirds of the $1.6 billion it put up to take Staples’ corporate office-supply business private 18 months ago, leaving around $600 million of equity in the unit, the people said. Sycamore may consider an exit from the investment over the next year, most likely through an initial public offering, one of the people said.

The recapitalization and any IPO would be focused on the division of Staples that sells anything from pens to office chairs to large corporate clients, which Sycamore carved out of the chain’s retail operations at the time of the LBO. The transaction will increase Staples’ debt load to $5.325 billion from around $4.25 billion.

Representatives for Sycamore, UBS Group AG and Goldman Sachs Group Inc., the two banks leading the debt sale, declined to comment. The people familiar asked not to be identified discussing a private transaction.

Staples plans to sell $3.2 billion of new term loans as well as more than $2 billion of other secured and unsecured debt. Its total debt load, net of cash, will be equivalent to around 4.7 times a measure of earnings, the same person said.

The company is marketing the deal with adjusted earnings before interest, taxes, depreciation and amortization of around $1.2 billion, including expected cost savings from recent acquisitions, two of the people said.

Sycamore will need to buy back the debt Staples issued in 2017 because covenants would have prevented a dividend this large, two of the people said. The $1 billion of existing unsecured bonds jumped 8 points to 107.75 cents on the dollar on Friday, according to Trace data. Staples will need to buy back those notes at the so-called make-whole premium, which compensates investors for missed future interest payments, resulting in a payment of at least 111 cents.

Bond investors will not be the only ones to benefit from the buyback. Sycamore has been purchasing the unsecured notes, which traded as low as around 88 cents on the dollar last year. It had bought around $71 million of face value of the notes during the first nine months of 2018, according to a disclosure made to investors, which was reviewed by Bloomberg News.

Away from the bond market, reaction to the recapitalization ranged from muted to negative. The existing $3.25 billion term loan due 2024 gained one point to 99.25-99.75, according to traders. The cost to protect Staples debt against default for five years surged 99 basis points to 466 basis points, the biggest jump since 2012, according to data provider CMA.