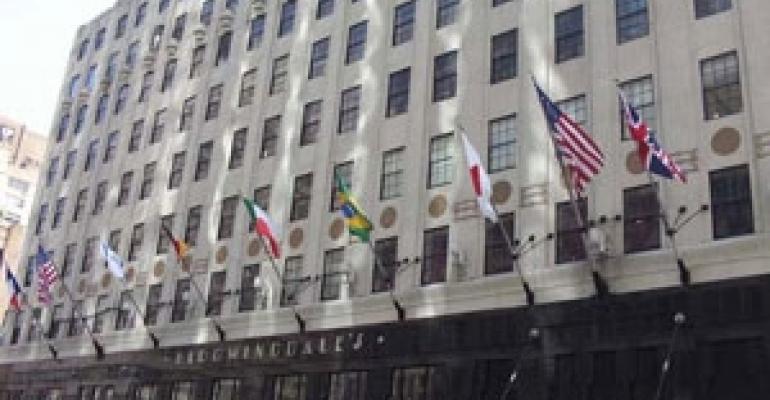 Judging by reports that Bloomingdale’s might be looking into opening stores-within-a-store in Canada, the Great White North continues to be a popular destination for U.S. retailers, but finding space there has not become any easier over the past 12 months.

This week Canadian news sources report that Bloomingdale’s might be in negotiations with the Hudson’s Bay Co., a Toronto-based firm that owns Lord & Taylor and Zellers, among other chains, to open mini-stores within its The Bay department stores.

Bloomingdale’s declined to comment on the rumors, but Canadian real estate brokers say that given the market’s tight vacancy rates, using the store-within-a-store model would be the next best entry strategy to buying leases from a local chain, the way Target did with Zellers last year.

“If they do a store-within-a-store with an iconic brand, they can get some terrific locations in areas they could never duplicate” on their own, says John Crombie, senior managing director of national retail services with Cushman & Wakefield Ltd. in Toronto.

No rooms to rent

In 2011, the overall vacancy for retail properties in Canada averaged slightly above 6 percent, according to Cushman & Wakefield research. The national vacancy for superregional centers—the most popular shopping format among Canadians, according to Crombie—stood at 3.5 percent. Vacancy at power centers was under 3 percent.

In certain markets, conditions are even tighter. In Toronto, the most popular entry point for U.S. retailers, vacancy at regional malls has ranged between 1 percent and 3 percent in recent months, according to a survey of local brokers conducted by Colliers International. Net rents range between $60 per sq. ft. and $145 per sq. ft. In Victoria, Vancouver, Regina and Winnipeg, brokers report that regional malls have vacancy levels as low as 0 percent.

“Even though there is a lot of retail development under way, in most Canadian markets there is very low vacancy and there has been an increase in lease rates,” says James Smerdon, Vancouver-based director of retail and consulting with Colliers. “So U.S. retailers are still having to be patient and, in some cases, creative with their space requirements in order to open stores in major Canadian markets.”

For example, Target, which is opening its first Canadian locations in former Zellers stores this year, has had to become comfortable with operating largely within malls, in some cases in two-level spaces and on occasion in stores that are smaller than its prototype in the U.S. Retailers that are used to stores in the 30,000-sq.-ft. range at home might have to work in stores that are almost half that size in Canada, says Crombie. Those that have always insisted on a square layout have to become open-minded about leasing rectangular spaces.

Plus, U.S. chains have to keep in mind that handling distribution logistics tends to be more challenging up North because major urban centers are located so far away from each other, notes Smerdon.

The difficulty of finding appropriate real estate, along with improving conditions in the U.S. market, has been putting a damper on some retail chains’ enthusiasm about entering Canada, according to Crombie. He notes that Kohl’s has still not opened a store there, in spite of poking around the market for more than a year. Neither has Dick’s Sporting Goods. When U.S. retailers heard about the sales volumes Crate & Barrel and Victoria’s Secret were achieving in Canada, many thought they could capitalize on the same degree of consumer demand, he explains.

“But then reality sets in when they look at how hard it is to get into the market. When shopping center sales are rising and you can take over a Borders location in your own backyard, why wouldn’t you be doing that, instead of trying to get into the Canadian market, which is a tight, expensive market to get into? So I think there is a pause.”

Even Bloomingdale’s might be looking to go into Canada largely because of rumors that Nordstrom plans to open stores there, Crombie adds. Whether upscale department stores will prove a good fit for Canadian consumers is another question, according to both Smerdon and Dave Marcotte, senior vice president and retail market expert for Canada with Kantar Retail, a global consulting firm.

“You have a substantial middle class that is spending money and that is fashion oriented and, in that context, Bloomingdale’s makes sense,” says Marcotte. “The question is: Is there a need for another department store in Canada? Most of the [specialty] retailers have absorbed demand in key [department store] areas. Personally, I am not sure what value Bloomingdale’s would bring to the Canadian market. It would take a lot of investment.”

Add in the fact that Canadian consumers have less of a taste for luxury brands than Americans do and having two upscale department stores operating in a market with a population roughly equivalent to that of California makes even less sense, adds Smerdon.

“Canada is not the same consumer market as the U.S. is. I think that’s spreading it quite thin,” he says. “Those chains will probably [have to] develop mid-price divisions to capture more of the market and broaden the demographic they appeal to.”