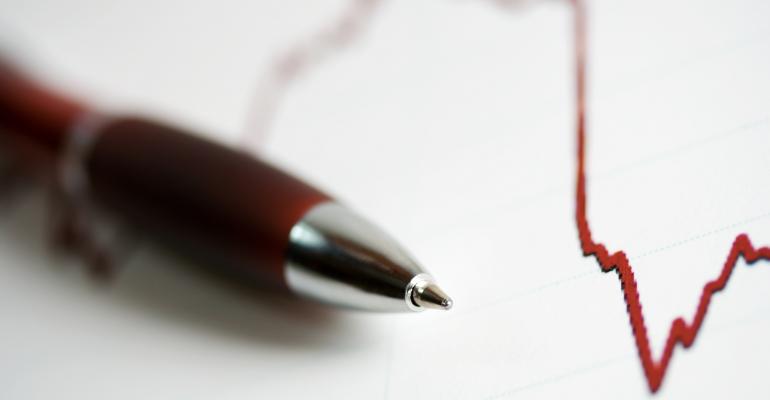 (Bloomberg)—U.S. retail sales unexpectedly fell in December, posting the worst drop in nine years in a sign of slower economic momentum at year-end amid financial market turmoil and the government shutdown.

The value of overall sales fell 1.2 percent from the prior month after a downwardly revised 0.1 percent increase in November, according to Commerce Department figures released Thursday after a four-week delay due to the shutdown. That missed all economist estimates in a Bloomberg survey that had called for a 0.1 percent gain.

Stock futures erased gains, Treasuries rose and the dollar fell, as the broad weakness across most sectors added to signs that U.S. economic growth is cooling from prior quarters -- potentially by more than projected. It may reinforce investor expectations that the Federal Reserve will hold off on raising interest rates this year amid concern about trade and global growth.

“These numbers are horrible,” said Ward McCarthy, chief financial economist at Jefferies LLC. “It appears to contrast quite sharply with reports of Christmastime sales that were generally seen as quite healthy,” and for the Fed, “rate normalization is on the back burner for a long time to come.”

What Our Economists Say

The broad plummet in retail sales at the end of the holiday shopping season likely resulted from a mix of crosscurrents. Plunging gasoline prices failed to boost discretionary spending amid the government shutdown and stock market turmoil. Consumers appear to have increased spending on just autos and building materials, while cutting on everything else.-- Yelena Shulyatyeva and Carl Riccadonna, Bloomberg Economics

Excluding automobiles and gasoline, retail sales slumped 1.4 percent, the biggest drop since March 2009, after a 0.5 percent advance the previous month.

Sales in the “control group” subset, which some analysts use to gauge underlying consumer demand, also missed estimates with a 1.7 percent decline, the biggest drop since the Sept. 11, 2001, terror attacks. That followed a 1 percent advance the prior month. The measure excludes food services, car dealers, building-materials stores and gasoline stations.

While the steep drop follows other data pointing to slower growth, it’s at odds with figures showing a healthy job market and steady wage gains. The slump also may prove temporary as stocks have regained ground following the biggest December plunge since the Great Depression, and the government shutdown ended in late January.

All but two of 13 major retail categories showed a decline, with non-store retailers -- which includes online stores -- falling 3.9 percent, the most since November 2008. The broad-based weakening reflected lower sales from clothing stores to and gasoline stations. Auto dealers and building materials stores were the only sectors to record increases.

December’s drop is likely to hit estimates of consumer spending following the best back-to-back quarters of economic growth since 2014 and of consumer spending since 2015. Economists surveyed by Bloomberg before Thursday’s data had forecast consumption to grow at a 3.4 percent annualized rate in the fourth quarter and 2.4 percent in the first three months of this year.

A separate report Thursday from the Labor Department showed filings for unemployment benefits unexpectedly rose last week, a sign of potential residual effects of the shutdown. In addition, producer price inflation cooled in January, according to a Labor Department report.

Estimates in the Bloomberg survey for retail sales ranged from a 0.2 percent drop to a 1.2 percent gain. Receipts at health and personal care stores fell 2 percent, the most since October 2016. Sales at sporting goods, hobby, musical instrument and book stores tumbled 4.9 percent, the biggest drop since September 2008. The release of January retail-sales figures -- originally scheduled for Friday -- has been postponed by the shutdown and is yet to be rescheduled. Despite the closure, processing and data quality were monitored during the closure and response rates for the December survey were at or above normal, the Commerce Department said. The retail-sales data capture just under half of all household purchases and can be volatile on a monthly basis.