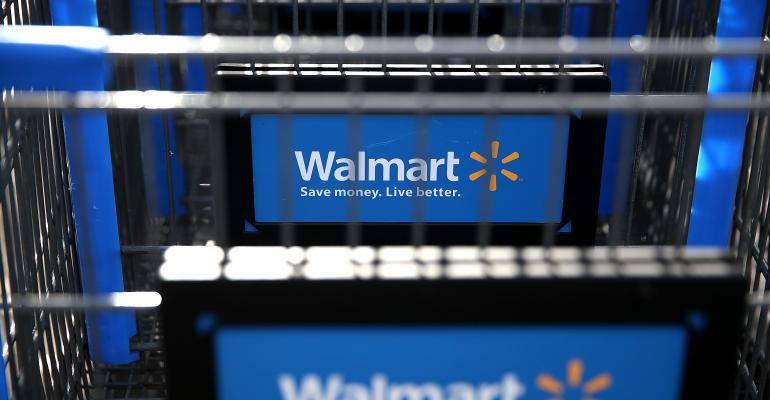 Wal-Mart Is on the Right Track, But at the Wrong Speed: Gadfly

(Bloomberg Gadfly)—What a difference a year makes for Wal-Mart.

The world's biggest retailer, at its annual meeting with analysts on Thursday, reiterated earlier forecasts that it didn't expect to grow earnings for the next two years. In a dramatic break with its past approach, it plans to slow store openings and put the money it saves into its e-commerce business.

Some investors balked at the outlook, sending shares down about 4 percent Thursday morning.

But the reaction wasn't nearly as bad as what happened a year earlier, when Walmart lost $20 billion in market value in less than 20 minutes -- the equivalent of the market value of Macy's and Nordstrom combined.

A year later, Walmart's stock price and analyst forecasts have rebounded. Sales growth at existing U.S. stores is steady, buoying confidence in the company. By resetting expectations, Walmart has bought itself some time to realign its business with changing customer shopping behavior.

The only problem is, that leeway won't last forever. Walmart needs to move faster.

It's great that Walmart plans to slow U.S. store openings -- it's been a long time coming. But the real slowdown doesn't happen until fiscal 2018, when Walmart plans to open just 35 superstores (in its heyday, Walmart opened hundreds of these massive outposts per year).

This year, meanwhile, Walmart opened, expanded or relocated 230 stores, and it expects to open 130 new locations next year.

And despite Walmart's lofty promises last year to grow online sales, they still lag the overall e-commerce market. In the first and second quarters of this fiscal year, Walmart's online sales rose 8 percent and 11.8 percent, respectively, from a year earlier. In contrast, total year-over-year U.S. online sales grew 15.5 percent and 15.8 percent in the same quarters. Amazon's quarterly retail sales growth was upwards of 25 percent in the past two quarters.

But Walmart is up against tough competition: Amazon, Alibaba and other online giants show no signs of slowing down. For Walmart to remain the world's largest retailer by revenue, it's going to have to pick up the pace.