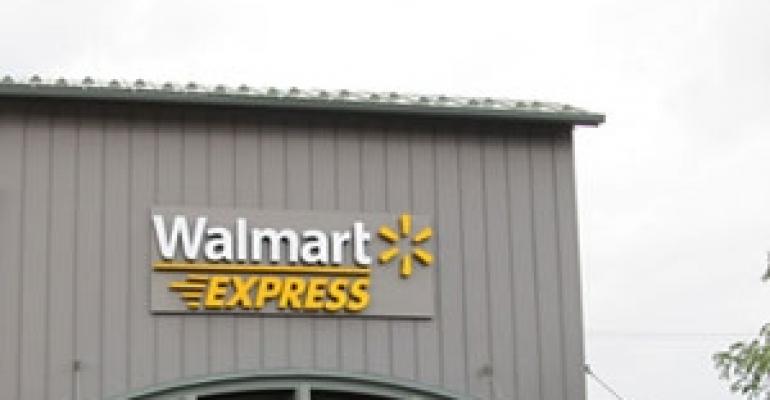 Wal-Mart’s Express Format Needs Time to Evolve, But Can the Retailer Afford to Wait?

When Wal-Mart launched its 12,000-sq.-ft. to 15,000-sq.-ft. Express format last year, the smaller stores were supposed to serve as Wal-Mart’s ticket into the urban markets the retailer found so difficult to crack in the past. Yet with the closing of the first Express location in Chicago this July, it has become clear the discounting giant still has a ways to go before becoming real competition to city-based convenience stores, dollar stores and drugstores.

While Wal-Mart executives did not respond to an inquiry about the current success of the Express format, published reports quote them as saying the store that closed in West Chatham was conceived as a placeholder for a long-planned Walmart supercenter that opened 100 years away from it this January. The company hoped the two formats could co-exist without cannibalizing sales from each other, but that’s not how the situation played out. Wal-Mart portrayed the closing in West Chatham as a solution to a unique situation, not a problem relevant to all of its Express locations.

Retail analysts, however, point out that Express stores suffer from some inherent issues that would need to be fixed if Wal-Mart is to grow the concept to hundreds of units, as company executives indicated is the goal. Wal-Mart opened its first two Express stores in Arkansas last June. Today, it operates a fleet of 10 Express stores, in Arkansas, North Carolina and Illinois. The stores are meant to serve as convenience venues for consumers in dense urban centers and rural areas and carry groceries and general merchandise. Some locations also feature pharmacies.

So far, however, getting the merchandising mix right for the smaller stores has proved to be somewhat of a challenge for Wal-Mart. Without the kind of insight into customer purchasing preferences available to competitors who already operate in urban locations, the retailer’s product selection in Express stores can be hit and miss, according to Natalie Berg, global research director with Planet Retail, an international retail analytics firm.

Wal-Mart Express units also carry dozens of options for some product categories, an approach that is at odds with the convenience store concept Express aspires to be, says Robin Sherk, senior analyst with Kantar Retail, a Columbus, Ohio-based consulting firm. “If you are thinking of a convenience trip, do you really want to see dozens of options of something?” she notes.

Looking into the future, the distance between new Express stores and Walmart supercenters will need to be carefully calibrated, to allow the retailer to take advantage of supercenters’ vast supply chains without giving way to sales cannibalization, the way it happened in Chicago, adds Berg.

Plus, Berg notes that one of Express stores’ main points of differentiation—the option it gives consumers to order items online and pick them up at the store—hasn’t delivered the kinds of benefits it can because Wal-Mart’s website is currently “just not compelling enough.”

“I think if they were to improve their e-commerce offering, this format could really work,” she says.

Given Wal-Mart’s track record in successful retailing, many market observers have confidence the Bentonville giant will eventually get the Express formula right. Although the retailer doesn’t break down its sales results by store format, in the second quarter same-store sales at all of its U.S. stores collectively rose 2.2 percent, marking the fourth consecutive quarter of sales growth.

“Stepping down to a store that’s 10 percent of their large format is probably a more difficult task then they imagined, but they don’t have to rush,” says James C. Bieri, principal with Stokas Bieri Real Estate, a Detroit-based retail brokerage and advisory firm, pointing to the negative experience of Tesco, which is now mulling shutting down its U.S. Fresh & Easy concept. “Wal-Mart needs growth like every retailer, but they don’t need growth that is haphazard.”

The concern is that profit margins at Express stores might be too low to justify the necessary investment, according to notes from Michael Keara, an analyst with Chicago-based research firm Morningstar.

Wal-Mart executives always made clear that the Express experiment would be slow and methodical, and that the company considers its Neighborhood Market concept a better growth vehicle, at least in the short term. But in spite of the retailer’s modest initial plans, it still had to cut the number of Express store openings from the 15 or 20 it planned last year to just 10 so far.

The danger of growing Express at such a slow pace, according to Sherk, is that Wal-Mart’s competitors can steal a sizeable chunk of the available market share in the meanwhile. She notes that today everyone from dollar stores to drugstores to grocery chains is expanding their urban formats.

“Sometimes, when you don’t hear about what’s happening from a retailer that tells you something,” Sherk says, referencing Wal-Mart’s relative reticence on the subject of Express stores. “I’ve heard that sales are doing well, but the notion of returns is kind of an open-ended question. Is this a scalable concept?”

Similarly, Charles Grom, Matt Siler, Paul Trussell and Shane Higgins, analysts who cover Wal-Mart for Deutsche Bank, wrote in a report dated Aug. 1 that if the retailer “rolls out a more aggressive small store strategy than currently modeled, we would look to this with more optimism.”

It seems the jury is still out on whether Express stores can be considered a success.