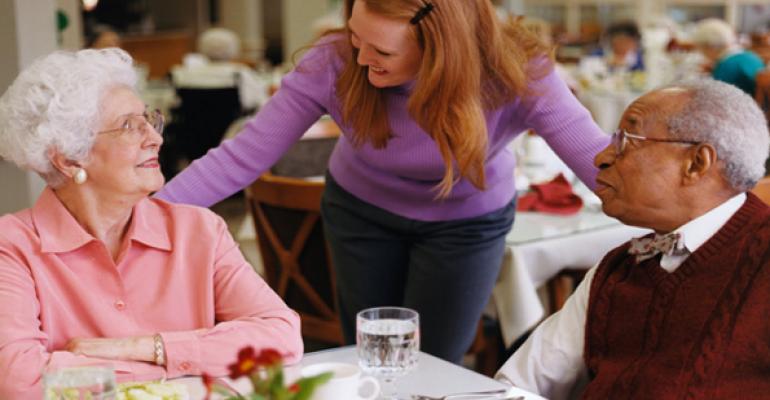 Why Seniors Housing REITs Might Be Stepping Away from Acquisitions

Depending on the outcome of the debate over tax reform, senior housing assets could become more attractive to some non-REIT players.

Private equity and institutional investors from the U.S. and around the world have been stepping up their pursuit of seniors housing assets, seizing an opportunity to capitalize on a pullback in acquisitions by seniors housing REITs.

What’s driving the slowdown in acquisitions by the REITs?

Mitchell Kiffe, senior managing director at CBRE Capital Markets, points to a broad decline in the REITs’ stock prices as tied to NAV, rather than any notion that private equity and institutional investors are simply crowding out the REITs.

Depending on the outcome of the debate over tax reform, senior housing assets could become more attractive to some non-REIT players, says Dr. David Friend, a physician who serves as managing director of the Center for Healthcare Excellence & Innovation at professional services firm BDO. At the same time, he says, the looming “medicalization” of seniors housing could intensify regulatory pressures and deter some investors.

Seniors housing consultant Andrew Carle says some non-REIT players might in fact be too hastily pouncing on seniors housing assets. In some cases, those investors are snatching up assets merely because baby boomers are aging, without giving proper consideration to market-specific dynamics, he says.

A number of the seniors housing acquisitions being made by non-REIT investors involve old, outdated facilities that face stiff competition from much newer properties, he says. “There’s a reason [these assets] are available,” Carle says. “It’s really a caveat emptor situation in some markets and with some properties.”

According to a recent report from CBRE, publicly traded companies—namely REITs—have historically executed the bulk of the deals in the seniors housing sector. But in the first half of 2017, the share of deals done by publicly-traded buyers dropped to about 10 percent, which is down considerably from 2015 and 2016, CBRE researchers note.

“Most of the publicly-traded REITs have moderated their aggressive pace of acquisitions,” CBRE report says.

Conversely, private equity accounted for 47 percent of seniors housing deals in the first half of 2017, according to the firm. With REITs largely out of the acquisition picture, at least for now, institutional and global investors have ramped up their quest for seniors housing properties in the U.S., the CBRE report says.

During the first half of this year, institutional buyers made up 35 percent of seniors housing deals in the U.S., compared with 28 percent in 2016, while the deal share for global capital stood at 11 percent, up from 2 percent in 2014.

Private equity investors are being drawn to seniors housing thanks to the sector’s “attractive yields and upside potential,” according to Lancaster Pollard, a firm that finances properties in the seniors housing sector.

In particular, Lancaster Pollard notes, private equity investors are snapping up skilled nursing facilities as REITs turn away from them, a strategy that CBRE’s Kiffe says is attractive thanks to the going-in yields — up to 13 percent or more. REITs have been shedding skilled nursing assets so they can steer clear of properties that rely heavily on Medicare and Medicaid reimbursements, according to Lancaster Pollard. “The growing demographics behind the senior living sector are hard to ignore. We expect that private markets will continue to pay attention.”

Amid that environment, HCP, one of the “big three” REITs in seniors housing, acknowledges its transaction pace this year is below normal, “but we think that caution is justified under current conditions,” Tom Herzog, president and CEO of HCP, said during the REIT’s second-quarter earnings call. In fiscal 2017, HCP expects to wrap up or commit to acquisitions in seniors housing and other asset types totaling $500 million to $750 million.

One of the other top seniors housing REITs aims to benefit from—not shy away from—heightened interest in the sector among institutional investors, however.

During Ventas’ second-quarter earnings call, Debra Cafaro, chairwoman and CEO, said the REIT is setting up a joint venture with an institutional partner (described only as a “leading” source of global capital) for a seniors housing portfolio with more than 70 properties. Currently, Elmcroft Senior Living leases the portfolio from Ventas under a triple net arrangement.

Ventas would hold a stake in the joint venture as well as in a start-up that will manage the assets. Kai Hsiao, former president and CEO of independent living operator Holiday Retirement, founded the unnamed management start-up. According to Hsiao’s LinkedIn profile, he was an executive at HCP from June 2016 to September 2017.

The Elmcroft deal is scheduled to be completed in the first quarter of 2018.

“The joint venture will continue diversifying our capital sources and could expand to provide a competitive advantage as the company continues to grow,” Cafaro said. She added that Ventas continues to come across “attractive” investment opportunities.

For its part, Welltower, the third of the “big three” seniors housing REITs, spent just $110 million on acquisitions in the second quarter—including seniors housing and other asset types—as the REIT stuck to a “disciplined” approach to the market. During the quarter, Welltower also sold a portfolio of 11 skilled nursing facilities for $117 million.

Welltower executives say its real estate portfolio should profit from disruption in the healthcare industry as the country’s hospital-centric model shifts toward seniors housing and other efficient care models. In Welltower’s second-quarter earnings call, CEO Tom DeRosa said that swing will usher in “a next-generation class of real estate.”

Looking ahead, Carle expects Welltower and its competitors to concentrate more on two formats in seniors housing: independent living (IL) and memory care (MC). And he foresees continued movement toward seniors housing properties in urban and inner-city settings, which appeal to baby boomers seeking to avoid traditional “elderly islands,” such as the sprawling retirement enclaves you might find in Florida.

Still, Carle says, the “long play” for the “big three” REITs remains assisted living (AL), with Welltower executives saying they’re seeing greater demand for AL versus IL in certain circumstances. But REITs could encounter oversaturation of AL facilities in some markets and should strike a more even balance between AL and IL, Carle notes.

“Assisted living, particularly at the very expensive high end, has been overbuilt,” BDO’s Friend says. “At the low price point, there’s probably a great deficiency of product, but it’s not clear any investor wants to build that product, because I’m not sure they think they can get a return.”