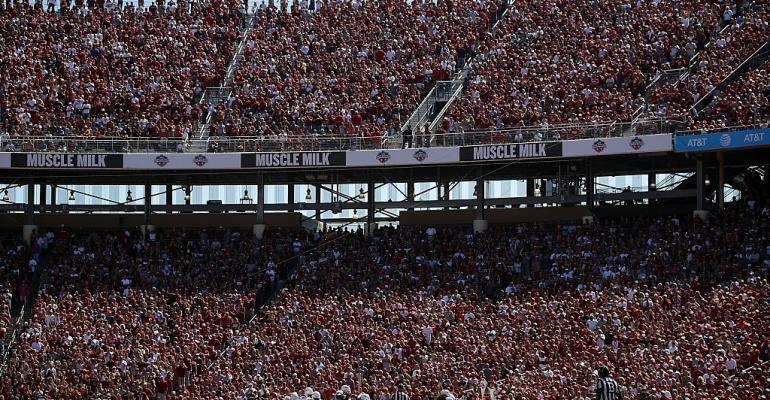 College Football Is Big Money for Landlords, Too

(Bloomberg)—The smell of fresh-cut grass on an autumn afternoon. A marching band belting out its fight song. The stadium creaking under the weight of 100,000 beer-soaked fans. The stimuli of college football look, sound, and smell like big money to television networks, apparel makers, and vendors of all kinds. Now landlords have joined the game as well.

Over the last two decades, property managers have discovered that renting off-campus beds to college students can be a great business. It makes sense: College enrollments have boomed, but funding for on-campus housing hasn’t. Private landlords stepped into the void, developing new, luxurious units, complete with golf simulators and resort-style swimming pools.

More recently, investors have come to see student housing as a hedge against a recession. It's a safe place to park capital, the theory goes, since young people go to college whether the economy is good or bad. The safest student housing, from an investors' perspective, is found near big-time college football schools, which enjoy broader brand recognition than other universities.

According to CBRE data, 50 out of 68 off-campus student housing complexes that changed hands during the first half of 2016 served students whose schools field football teams in the NCAA’s Division I—the highest level of competition. Thirty-four of those asset sales involved apartments near schools that belong to the so-called power conferences, which generally have the top-ranked teams.

Investors also paid higher prices for apartments located near these football powerhouses, based on the average capitalization rates, which represent expected rental income as a ratio of purchase price. The cap rate for student housing complexes near non-Division I schools was 6.4 percent; the cap rate for apartments near schools participating in Division I power conferences was 5.5 percent. In layman's terms, investors paid more and earned lower yields for the privilege of renting to Gators, Longhorns, and Wolverines.

A good football team isn’t the only reason such schools enjoy strong reputations, stable enrollment, and therefore, a steady supply of renters for off-campus housing. In most state university systems, schools with large athletic departments are also those with stronger academic reputations and research facilities. But CBRE discovered that being close to a top football program definitely helps.

“Those schools are getting students from a broader geography, and they’re getting better students,” Rice said. That means more overall demand for housing and most likely, a student body with greater ability to pay higher rents.

The same operating principle has long led single-family landlords to target properties within walking distance to big, public universities, said Dennis Cisterna, chief revenue officer at Investability Real Estate, a marketplace for buying and selling rental homes. Compared to older tenants, college students can be transient and prone to destructive behavior. The trade-off for exposure to collegiate hijinks is that proximity to campus lets landlords access a steady supply of new renters.

"If someone drops out of Ohio State or decides to go to a new school, there's always going to be a flock of new students," Cisterna said.

Small landlords, like large property managers, relish turning on the television on Saturday afternoon and seeing a stadium full of tenants.