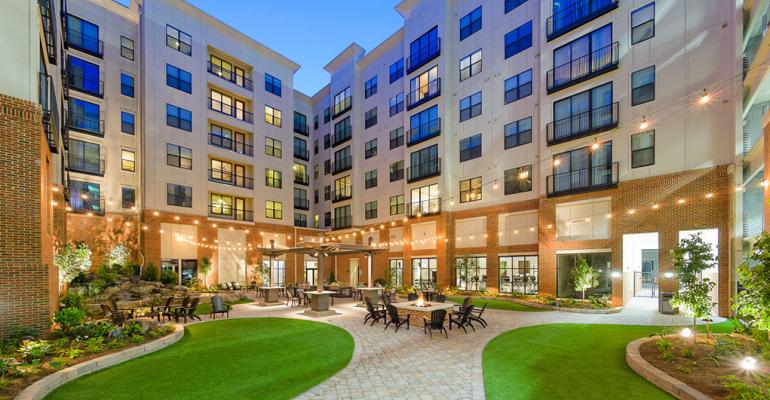 Students will be able to get hot coffee 24 hours a day at The Standard St. Louis, a new upscale student housing property at St. Louis University, when the community opens for the fall 2015 school year. The Standard will include a café bar and coffee lounge with Starbucks coffee.

New student housing properties like The Standard don’t just include amenities like study lounges and fitness centers—they also include services like yoga classes and coffee lounges. “The amenities that are coming on line now are super high-end,” says Ryan Lang, head of the student housing division for ARA, a Newmark company. “Students have taken a real liking to them.”

“The new properties, which typically have superior amenities to existing stock, are leasing at a faster rate than the national average,” says Jay Denton, a senior vice president for Axiometrics. Properties delivered over the last two years and those delivering this fall were 53 percent pre-leased for the fall 2015 school year as of February. That’s dramatically higher than the national average of 45 percent, according to Axiometrics.

“Most of what has been delivered has been in the upper-tier price point ranges,” says Denton.

At The Standard, amenities include a resort-style swimming pool, a 7.950-sq.-ft. clubhouse and a game room. Fitness facilities include a strength center, a cardio studio and a yoga space. There’s even a free tanning center.

These kinds of amenities are rapidly becoming the norm for new student housing properties. “We are seeing quite a few coffee bars and lounges,” says Taylor Gunn, a research analyst for Axiometrics Inc. Other common amenities and services include fitness programs or studios, arcade games, cyber cafés, heated parking and outdoor fireplaces or fire pits.

Swimming pools are favorite amenities. At Sterling Burbank Apartments, opening this fall near Louisiana State University, students will be able to relax on a “private beach between a sparkling pool and lazy river [a swimming pool designed like a winding river],” according to the community’s website.

New properties like The Standard St. Louis also include high-end finishes inside the apartments, including stainless-steel appliances, granite countertops and full-size washers and dryers. There’s even a 42-inch flat-screen TV in every apartment. Typically, one bathroom is built for every student housing bedroom, so that the students who live in these new communities will never have to wait for the shower. But due to the rising costs of pipes and fixtures, building these extra bathrooms adds a tremendous cost to new developments. “Having one bath for each bedroom is now expected, across the board, for new development,” says ARA’s Lang.