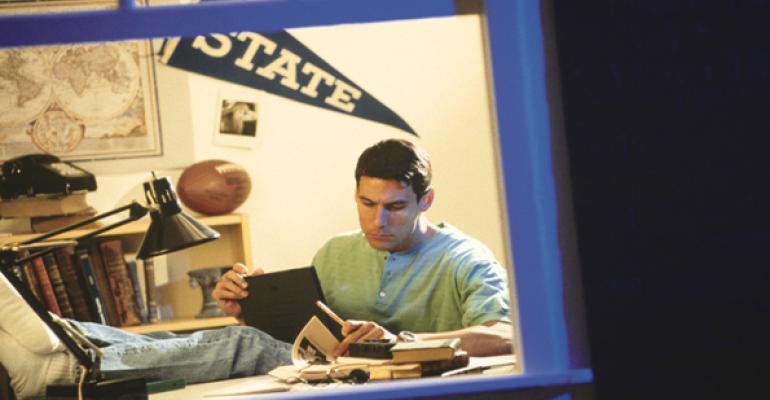 “We saw strong occupancies in 2014 … even though there were more than 60,000 beds delivered,” says Taylor Gunn, a student housing research analyst for Axiometrics.

This year looks even better for the student housing business. Pre-leasing is going very well for the newest, highly-amenitized student housing developments. Enrollment is also expected to increase, especially at the largest colleges, and fewer new beds are hitting the market compared to the last two years.

“There is a demand for purpose-built student housing,” says Brian, Veith, assistant director of student housing for the National Multifamily Housing Council.

New student housing is in demand, even though it’s much more expensive than the existing student housing stock. The national average effective rent for this fall's new beds is $779. That’s up from $701 in 2014 for the new beds that opened in that year—a huge increase of more than 10 percent, according to Axiometrics.

“The amenities are a huge part of it,” says Gunn. “For now, students are responding really well to this higher-priced, highly-amenitized product.”

College is enrollment up for major universities

The largest schools continued to increase their enrollment of students in 2014—and those large universities are the places where student housing developers are building new properties. “The big universities are growing, but they are growing modestly,” says Jim Arbury, NMHC’s vice president for student housing. “Our members are typically owning and investing in properties in these larger markets.”

Enrollment is slightly softer overall in 2014, falling to 0.3 percent to reach 20.4 million students in attending degree-granting educational institutions throughout the United States. The news is better for 2015, with a slight increase in overall enrollment forecast by Axiometrics.

“Students are going to continue to go to college, regardless of what else is going on in the economy,” says NMHC’s Veith.

“Construction costs have gone up,” says Arbury, explaining the decline in new construction. Also land to build one is growing hard to find.

But 2015 will still be a huge year for new construction: 48,000 new student housing beds is still higher than the student housing sector did in any of the years of the last real estate boom, peaking at about 45,000 in 2008. Axiometrics counts 73 universities receiving new student housing this fall. Of those, only 15 will get more than 900 beds. Also, about 30 percent of the schools getting new beds this year haven’t received any new supply in the past four years.