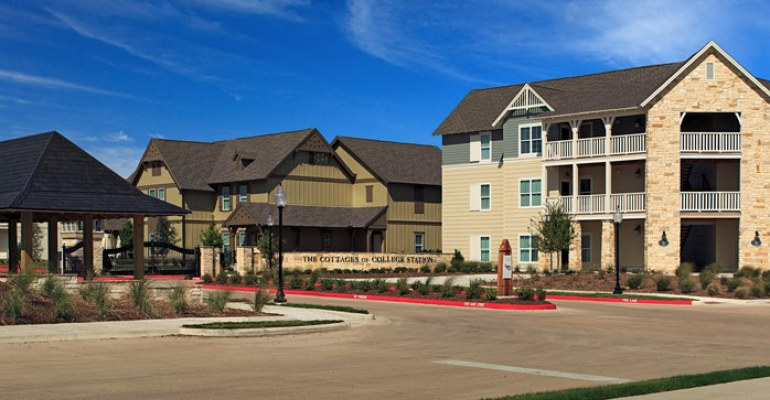 That sets the student housing sector on a path for rent growth in the years ahead. Universities and college towns have successfully filled the extra tens of thousands of new student housing beds that were delivered in 2014 and year-to-date in 2015. Looking forward to next year, developers are planning about the same number of new beds as the market successfully absorbed this year.

“The sector remains strong and there is still opportunity for growth,” says Taylor Gunn, student housing analytics lead for data firm Axiometrics, Inc., based in Dallas. “We expect it to remain stable, if not better, than previous years.”

It wasn’t clear that students would sign leases for all of these new units. “Little true purpose-built student housing was delivered prior to 1995,” says Gunn. “Expansion in the student housing sector really started to take off over the last four to five years.”

Student housing markets have proven strong enough to handle all the new construction that developers could build. Occupancy levels are high, averaging 95.7 percent at off-campus student housing properties as of August 2015.

“We can expect occupancy to end up around 96 percent for September,” says Gunn. That’s a strong improvement from 94.4 percent, the average occupancy in August 2014, according to Axiometrics.

The outlook for 2016 is also strong. So far, developers have 48,216 new beds under construction, about the same as the number of new beds they finished this year. It’s still possible that they will rush to build more—though with less than 12 months before the next school year begins, developers are running out of time to seriously overbuild the markets.

On-campus housing is also not likely to create any serious problems. Though more colleges are partnering with private developers to build student housing on-campus, the 46,000 beds planned on-campus for 2016 are roughly equivalent to the amount of on-campus housing built in 2015, according to a new data series by Axiometrics.

Developers are looking further afield for opportunities to build, however. The list of colleges where developers are planning projects in 2016 includes 53 schools that did not see new student housing units open in 2015.

“They are not building in the same markets,” says Gunn. “We are seeing a lot of branch campuses that are getting supply.”

Developers have also added new units to the strong student housing markets that they have targeted in the past, including Texas A&M, Texas State, Arizona State, University of Florida, Florida State and University of Georgia.